While scrolling through my Facebook feed over the weekend, several gaming pages posted about this interesting premise of a game: Humans have suddenly disappeared. You play as multiple cats banding together, searching for the truth of where everyone has gone and if it's genuinely worth bringing them back... If they can be brought back anyway.

But Peace Island has a lot going on for it besides that simple enough sounding premise. 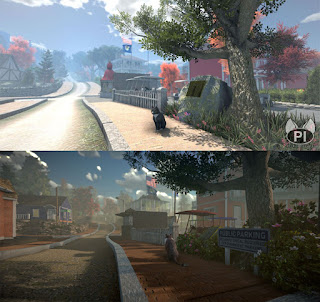 Started as a Kickstarter by Eric Blumrich in 2018 that raised a decent $13,098 of it's $7,000 goal, the premise is fully realized as follows according to the Kickstarter. "Peace Island is a open-world, story-driven adventure game set on a remote Maine island community. The story - a mix of science fiction, alternative history, and mystery - unfolds from the perspective of the nine cats who call the island home, when they wake up to find their human companions gone. Peace Island is an interactive story-driven experience which will focus on discovery and exploration, rather than combat. The player has the opportunity to experience multiple divergent storylines, as they approach the ultimate decision: “Are the humans worth bringing back?”

The game didn't garner a lot of attention until recently. It spiralled into the public eye and was picked up my many news sources... Just like this one right now, heh. You can still support the development of the game right now on Patreon. The game is in development for the PC, Mac, and Oculus VR with no current release window available. Check their Patreon for information on when the next alpha is released!

Posted by FenrisTheRogue at 11:11 AM