Out of the Park Baseball 20 (Steam) - Review

Ever have that fish out of water feeling? Well, that is me since I am not a huge baseball fan. With that in mind, does this game have anything to offer someone outside the baseball fandom? Also, how does it hold up to the other 19 installments? Click "read more" and let's take a look.

Game play involves a lot of menus. Other than collecting baseball cards, the player spends most of the time taking the role of a baseball team manager. Everything from applying for a team, trading players, competing in all the different leagues, and picking plays is included. Pretty much every professional team is available and everything is presented with great accuracy to actual baseball. While all these choices and information is great for a baseball fan, it is extremely confusing to someone less familiar with the sport.

Actual baseball games are played from an isometric perspective.

The player has the option to manually control the various roles, set them to A.I., or a combination of the two. From there, it is just a typical game of baseball played to simulate how the players customized teams would perform.

Most likely, the obvious question here would be, what does this 20th installment do differently than the previous titles with the same concept and gameplay? For the most part, this installment is a polish job. Small, unnoticeable performance improvements, several cosmetic updates including better looking 3D animations in game and updating the way that plays will turn out based on the current baseball season. These, are very minor updates that do not justify a sequel, however this is standard for sports games so it is to be expected.

There is not much in terms of audio to speak of with this game, but it is exactly what one would expect to hear from baseball. The same music that is played at real baseball games is present, there will be the voice of the umpire to say "strike 3" or others calls, and even a stadium vendor will be heard from time to time. Crowds cheer on big plays and when opening rare cards from booster packs as well. 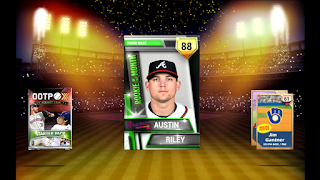 Overall, audio is not much in terms of depth, but ads a level of charm.

Visually, this game does not impress. Menus are very detailed but confusing to navigate, and the actual baseball games have some 3D graphics that are not in anyway up to date. As a whole, the game feels mostly like a portfolio for a manager. It is a unique take on the baseball game genre, but defiantly one for a specific group of fans.

Through and through, Out of the Park Baseball is a game strictly for baseball fans that will do little to nothing for anyone else. While the concept of this game, being in control of the manager, one has to take into account that this is the 20th installment. Currently, the asking price $40, and I cannot recommend this game at that price when one could obtain one of the previous installments for half that price or less. There are not enough updates or changes to justify this purchase if you already have Out of the Park Baseball 19 or lower. However, if you are a big baseball fan, who doesn't own any previous installments, and really want every little play or player to be as up to date as possible, then this is a good game for you. I would still recommend waiting for a sale or price drop.

for hardcore baseball fans only
Posted by Cendoo at 12:00 AM