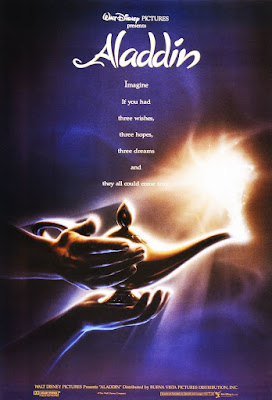 
SUMMARY
Directed by Ron Clements and John Musker, Aladdin tells the story of Aladdin, a good-hearted thief, growing up in the streets of the City/Kingdom of Agrabah.

One day, Aladdin has a chance encounter with Princess Jasmine, the daughter of the ruling Sultan, and the two fall in love. Due to his low status however, Aladdin is unable to wed Princess Jasmine and so unknowingly falls in with a scheme by the Royal Vizier Jafar and his parrot assistant Iago to find a powerful artifact in the dangerous Cave of Wonders, a place only Aladdin can enter.

After he is betrayed by Jafar, Aladdin discovers the mysterious artifact is a magic lamp which, when rubbed, releases a nigh-omnipotent Genie, who promises to grant Aladdin three wishes.
With the genie by his side, Aladdin seeks to win Jasmine’s hand, all while Jafar continues to seek out the lamp and take over Agrabah.
REVIEW
Widely regarded as one the greatest animated features of all time and with the directors of such films as The Great Mouse Detective, The Little Mermaid, and The Princess and the Frog at the helm, it will be no surprise to the reader that I feel that Aladdin still stands as one of the most magnificent pieces from Disney’s first Renaissance period.

ANIMATION - 9/10
Beautifully animated in the traditional style (which I truly wish would come back into common fashion), Aladdin showcases some of the best of Disney’s Renaissance period work. Filled with moments of incredible slapstick humor (courtesy of the Genie), wonderfully charming interplay between the various characters, and action-packed frenetic energy throughout, you can very easily see the love and passion put into every frame and character.
Whilsts the overall visual aesthetic of the film remains classic Disney, with big eyes and expressive features, Aladdin brings a general Middle Eastern feel that is unparalleled among the Disney canon (and perhaps found only in its contemporary, The Thief and the Cobbler).
Proof of the overall quality of the animation can be found in none other than the Genie, played fantastically by Robin Williams. The character of the Genie was designed from the very beginning for Williams, and so much of Williams manic energy and personality comes through the Genie’s movements and actions, much of which was the result of ad libbing on Williams part.

Overall, the animation stands as a testament to the strengths of Disney traditional animation and why they need to return to it.

SOUNDTRACK - 10/10
When Howard Ashman originally conceived Aladdin, he pictured it as a 1930s Cab Calloway style musical set in Arabia and much of that mindset remains in the finished product. Ashman’s passion for this project shines through in every note and it stands as a magnum opus of its creator, who sadly passed away over a year before it was released.

If Aladdin’s musical numbers could be described in two words, they would be “sheer spectacle”. Songs like “Prince Ali”, and “A Whole New World” are intimately tied to the stellar animation and continue to delight and enchant both adult and child alike with their whimsy and romance respectively. I found myself listening to the soundtrack even as I worked on this review, with “A Friend Like Me” continuing to be a personal favorite of mine (though much of that might be due to my hero worship of Robin Williams).
Beyond the lyrical pieces, the instrumentals are also filled with an immense sense of adventure and magic that remains singularly unique. “The Marketplace”, “A Dark Night” , and “The Cave of Wonders” stand out particularly well in my mind, where the interplay of danger, mystery, and romance allow me to play out the scenes from the movie in my head perfectly.

As far as I’m concerned, when you hear a song from Aladdin, you know that it can’t belong to any other Disney film and that speaks volumes to the love and beauty that the music brings to the entire piece.

CHARACTERS - 8/10
If I am totally honest, most of the Disney films from the First Renaissance period suffer from a very similar problems. Their side characters are almost always more interesting and fun than their main characters, and Aladdin are unfortunately no different.

That is not to say that Aladdin and Jasmine are terrible characters or awfully performed, quite the opposite in fact. Scott Weinger and Linda Larkin were excellent and well cast for their roles and the musical talents of Brad Kane and Lea Salonga are a genuine highlight. The protagonist and his romantic lead are simply rather bland when compared to the incredible energies of the Genie, Iago, Abu, and Jafar, who steal the show and make me not really give all that much of a damn about how milk toast our leads are.

Jafar and Iago are particularly noteworthy as they are generally held among the greatest Disney villains of all time. Played by Jonathan Freeman, every moment Jafar is onscreen, his manic energy, serpentine mannerisms, and cold charisma and manipulations are a treat for all to see. Alongside a playful rapport with his parrot assistant, Iago, played by Gilbert Godfrey, Jafar stands as a treat to witness.
But...let’s be honest. There is one reason why Aladdin has remained an absolute classic of Disney animation. The Genie, played by the irreplaceable Robin Williams, has so much charm and enthusiasm that it is simply astounding to witness. I make it no secret of the pedestal that I place the late great William upon, but this role was literally custom built for him, and it shows. No other character in the film fits quite so seamlessly into their role as Robin does. But it isn’t just the humor of the Genie, but Robin’s unending enthusiasm for life and incredible soul which leaks through the screen and make us feel a genuine comradery between Aladdin and the Genie.
Almost on the strength of Williams’ alone, but definitely supplemented by an unforgettable villain and energetic side cast; what Aladdin lacks in main characters is more than augmented enough to bump the score to a solid 8.

STORY - 7/10
Almost all of my readers will be at least somewhat familiar with this story, as quite a few of us probably grew up with it (I know I did). While a good and entertaining film, I do have to say that compared to some of its contemporary or the current Disney canon, Aladdin does seem a little simpler and weaker on story, coming off as more reliant on its spectacle to carry its weight.

With particular note, I find all the scenes following “A Whole New World” leading up to Jafar’s capture of the lamp to be where my interest wanes, with only the sheer aura of Robin Williams performance keeping me in my seat.

Again it is not terrible or offensive, it just feels overall quieter and like the film is simply waiting for the lamp to switch hands and the third act to begin. Of course, wants the third act does begin, the finale is absolutely spellbinding, but it does get to be a bit of slog until that point.

FINAL THOUGHTS
Even after 27 years, Aladdin remains a cornerstone classic of Walt Disney Animation Studios and a magical experience. The unparalleled performances of Robin Williams as the Genie and one of the greatest Disney villains, coupled with a stunning musical score and energized animation, make Aladdin a must own for every household and a film which I will always enjoy watching.