Not everything needs to be fair. Fatal Labyrinth is a fantasy dungeon crawling game for the Sega Genesis in which the player explores randomly generated dungeons in a top-down layout. Everything is turn based. Nothing on the screen moves unless the player moves. This gives the game a bit more of a table-top Dungeons and Dragons type feel. Players have all the time they need to obsess over the randomly dropped gear before taking the next step into combat. 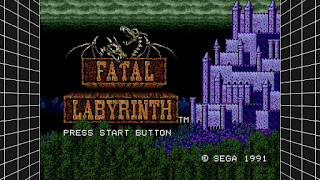 One of my favorite features is the grave site at the game over screen. The more you level up during your play-through, the more townsfolk will mourn your passing upon your death.

The random nature of the levels can be an issue at times. Returning to this game to write the review, the very first play-through, I was treated to a dungeon with two inescapable rooms with no exit. I puttered around for a while, but I was not able to escape and ultimately I had to restart the game. Yes, I am aware in most cases, you can walk the perimeter of the rooms and a secret hallway will appear. That was not the case this time out. 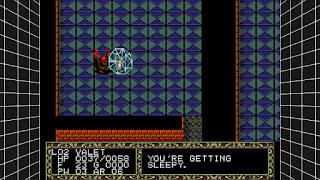 Other issues from the random encounters include starting the game surrounded by enemies and getting killed right away, and having the same thing happen when you push through to a new floor.

In the 80s, on MS-DOS, we had a game much like this called “Rogue”. It played almost identical with the exception that everything on the screen was represented with ASCII graphics rather than a pixel art tile set. The parallels between Rogue and Fatal Labyrinth are so close, I have always equated this game to the overly complex CRPGs of the time, rather than the colorful JRPGs such as the Phantasy Star series. I think this made it hard for Fatal Labyrinth to find an audience since it was clearly marketed as a JRPG. I can only imagine people bought it thinking it would be like Phantasy Star II or Shining Force II.

This is a good game. It’s governed by a lot of RNG, so it can seem unfair, but it succeeds at being different and interesting every time you play. I say it's worth picking up.

At the time of writing this, Fatal Labyrinth sells for about 10 bucks for the cartridge on eBay, or you can get the game on Steam for $.99. 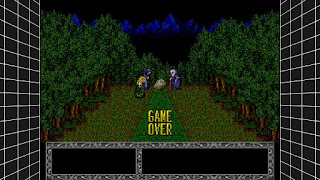 Games I have reviewed for Emerald Rangers in order of best to worst: