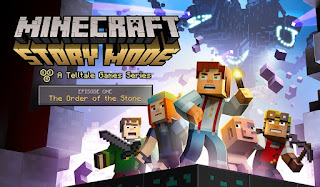 Not the most in-depth telling, but it'll do.


So in 2017 on the third of July, during a random Xbox sale and while I was on a week break from my job, I bought the first season of Minecraft: Story Mode for $12.87. As a major fan of most of Telltale's style of games (and also the fact they are simple achievement fodder), I decided to give it a random shot. I had nothing better to do at the time after all. After finding out about the game series' impending permanent removal from all digital store fronts on June 25th, I've decided to give my thoughts and some of the story to this strange and random dabble into the story lacking world of Minecraft (only talking about the first season here). 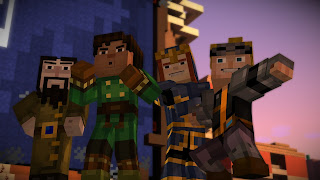 First things first to state the complete and utter obvious... These games didn't do very well in terms of overall sales and was toned down in seriousness in comparison to other games from the studio. It had small minigame segments to break up the usual Telltale formula of "talk to x to proceed or solve puzzle to do y.", such as avoiding enemies in a large corridors in a rather arcadey fashion and these could easily completed by younger players. 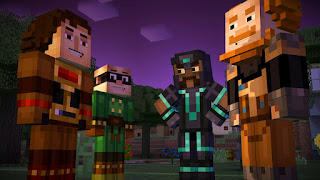 But what of the meat and potatoes of the plot- the story? In season one, you're a, and I quote, "newbie builder" named Jesse (which this character you can pick the appearance and gender for, which I thought was nice honestly. Player choice is always a plus in my book) and in the beginning, your goal is to beat out other asshole characters in a building competition. Soon though, the main characters consisting of Jesse, Axel, Petra, Olivia, and Lukas go on a crazy adventure to protect their world from a crazy entity known as the Wither Storm after practice much everything hits the fan. 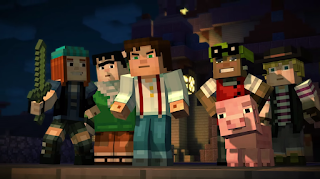 The game doesn't feel like it's anything related to Minecraft, it literally feels as if the story was written first and then the Minecraft elements come second... Which honestly helps, I'm not gonna lie. It's definitely not the worst TellTale game in any capacity, that title goes to the Game of Thrones game
Posted by FenrisTheRogue at 11:24 AM