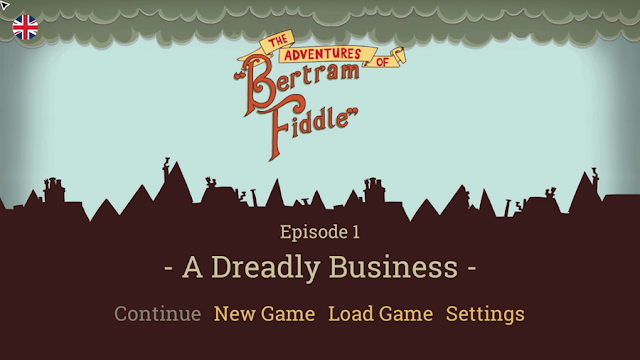 Hello all, Red Diamond back in the game review scene with a simple little point and click adventure game. What we have here, is the first episode in The Adventures of Bertram Fiddle, a very simple title that makes a promise for a series with its name alone. (Telltale style.) What does this title hold? Click "read more" and we shall find out.

The story revolves around the title character, a scientist/adventurer named Bertram Fiddle and his cyclops assistant Gavin. Bertram is upset because it has been 2 months since his last adventure and his wife will make him get a "real" job if he does not have another adventure soon. 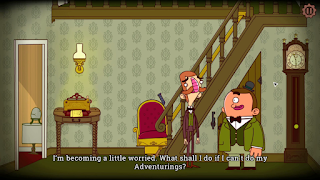 From there, the story gradually turns into Bertram and Gavin chasing after a serial killer due to a series of coincidences starting with accidentally switching briefcases with the killer that lead to Bertram making a bet with Sherlock Holmes over being able to catch this killer. Ultimately, the story does not flow properly and stuff, just happens, which not engaging story telling.

Dialogue in the game involve a lot of puns and mild shock humor. Bertram himself takes every opportunity to drop a one-liner. 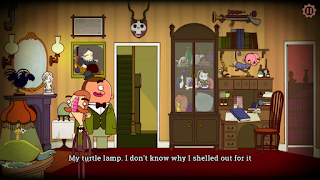 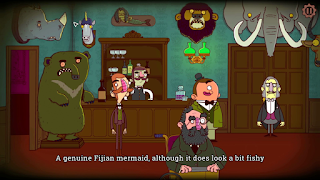 Sadly, this type of humor falls into an uninteresting middle ground. It is not cleaver enough to get many laughs, but not bad enough to cringe at, just very average.

Shock humor found in this game is another middle ground. Weird things will be witnessed like a man being massaged by a bird, someone found in the dark eating a giant dead bug, and the various body parts left behind from the serial killer. Unfortunately, while these things are mildly shocking, I feel it hurts the game more than helps. Nothing is ever quite shocking enough to get a reaction out of an adult, but they are enough to prevent this game from being marketed towards kids. Given how easy the game is, the younger audience might have been the smarter move. 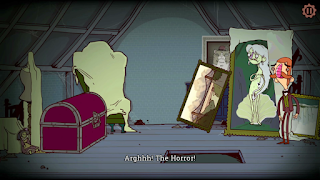 The writing has some charm to the casual audience, but never really impresses.

Game play is a simple as it gets, a point and click puzzle solving adventure game. Left analog stick controls the cursor, and the A button clicks. (On the Xbox One edition.) Sadly, the puzzles are the biggest problem of this title simply because they are too easy. Many puzzles almost walk the player through them and on several occasions, puzzles were accidentally solved early.

At one point, another Bertram appeared and walked across the screen. It is unclear if this was a glitch or the game trying to say which way to go. On that note, the hints can be a little too helpful as well, like having to bridge a hole with a picture of a bridge. Really, this is a shame because the types of puzzles fit the environment perfectly and could have been very cleaver if the challenge factor was raised a little bit.

The only other piece of game play are these rare chase moments where you auto scroll a repeating background and try to avoid obstacles in order to build up speed. 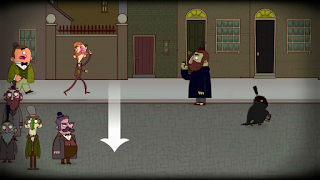 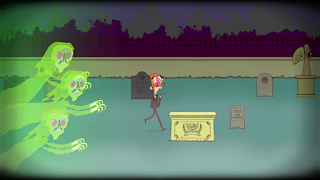 These segments are not very interesting and drag on a little too long.

If there is one thing this game does very well, it is the voice acting. Every bit of dialogue in the game is fully voiced and all the characters have a lot of personality, appropriate accents, good acting, and recognizable traits. Not much else to say, the voice actors did a great job.

Music is mostly used for atmosphere and works very well. The background music, or noise, gets creepy, calm, action packed, or just casual at all the right points. Despite occasionally sounding a little stock, the audio works well enough to where I can't really fault anything in this department.

This game has a very distinct art style that makes the player feel like they are controlling a cartoon. 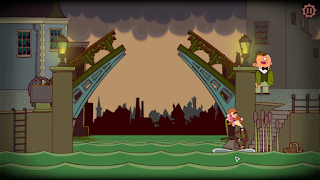 It is a very appealing art style, almost reminiscent of old 2D adventure games, but with much smoother illustrations. Overall, this is a very nice art-style, the only thing I would have to complain about is the animation, or lack there of. Characters barely move. Even when using an inventory item, all that happens is Bertram gestures and stuff just appears or disappears. 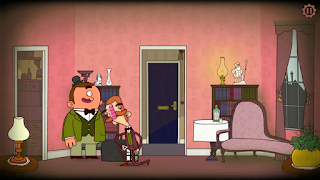 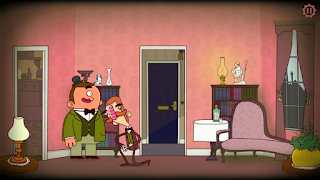 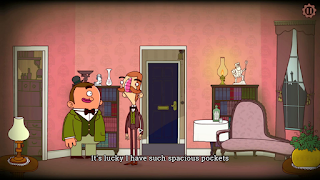 While this isn't a major problem, it would have been nice to see the characters interact a little more with their surroundings.

Adventures of Bertram Fiddle: Episode 1 has a lot of charm and there is clearly some love put into this title, unfortunately it does not impressed. Nothing is really that "bad" but just "okay" which is a really unfortunate state to be in. However, I would not write off this series just yet. This is only the first episode and many adventure games that were episodic have had their first episode be the weakest. All of the characters are likable, the environment is great, and there is some real potential to this story. Hopefully, the new few episodes go further than the minimum but until they come out, I can't recommend this episode as a stand alone.