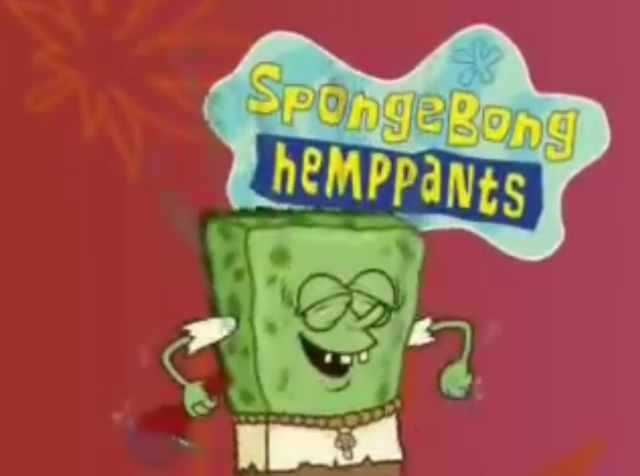 So it has come to this, eh.  Kaiser Sensei reviewing a series of SpongeBob parody skits called SpongeBong HempPants.  Yup, I'm doing Green Diamonds job.  I'm not going to go over the history of this parody, who do I look like? Nicktendo? (Seriously.  Check him out).  No! I'm just going to do what I always do and report what I see and how I felt about it.  Yeah, I know it's pointless to do something like this on a series that runs for less than ten minutes.  However, Red Diamond requested this and I don't want him punishing me.  So, here it is.  Kaiser Sensei's summary and review of Spongebong HempPants. (Click on "Read More" to read the full article).


Note: Sorry for the LQ screens. 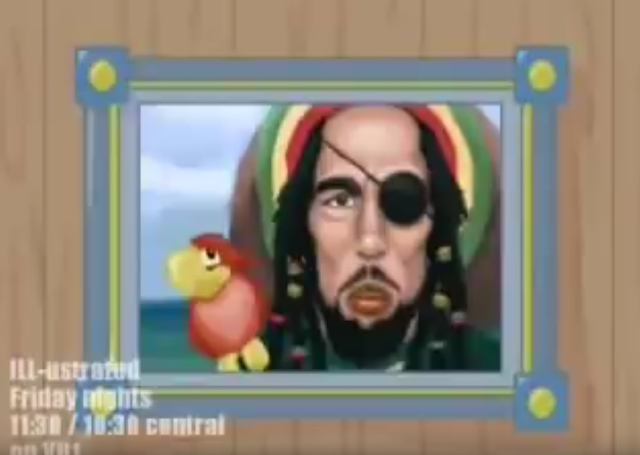 The intro starts off with a Rastafarian Pirate or as I like to call him, A Pirate of the Caribbean ( I hope that wasn't racist).  Anyway, the intro opens up with a stoned Rastafarian Pirate telling kids what time it is, all while coughing and gagging because he had too much of a hit.  The theme song hits and what you see is a spot on parody of the SpongeBob intro but with a lot of stoner puns.  Examples include: SpongeBong's town taking place in a bong and not under Bikini Island.  SpongeBong living in a Mushroom and not a Pineapple. Lastly, SpongeBong being happy from being high on pot and not from being high on life.  Yeah, it's what you'd expect from a parody like this.  I chuckled once, then I was over it. 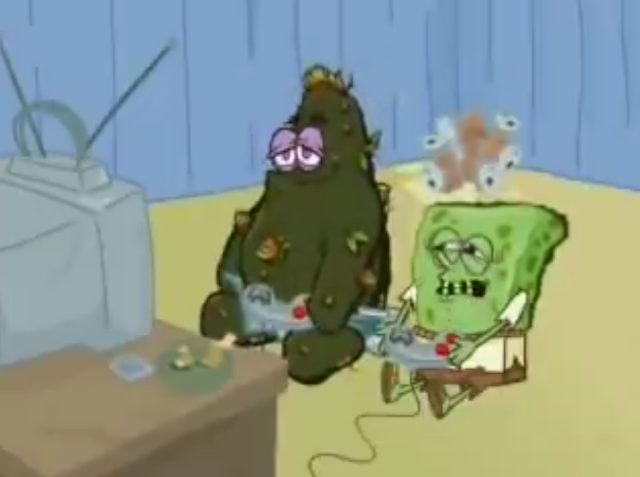 Episode one opens up with SpongeBong playing Tony Hawk's Pro Skater with his best friend, Hashbrick (Yup, Patrick is a pile of hemp in this parody).  SpongeBong and Hashbrick want to enhance their experience by smoking some Sea-Weed (hurr, hurr, hurr, THE DANK) but they are all out, so they freak out.  SpongeBong calms down, then our two heroes go to buy more drugs from their dealer, Splintward... Splitward... Squintward... I don't know, I couldn't understand what SpongeBong was saying when he was pronouncing his dealers name.  Also, yeah, their dealer is a parody of Squidward.  SpongeBong tries to buy more Sea-Weed but he hasn't got the clams (I wasn't being clever, that's what they call the money in this series), so he needs to find a way to get the cash. 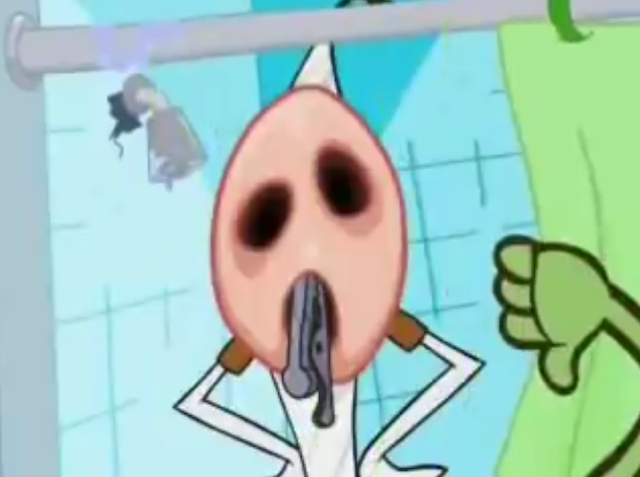 SpongeBong freaks out when he sees a bus full of Shy Guy's (well, Shy Guy-esk).  Things get dark, the real SpongeBong becomes super depressed, so he shaves his eyebrows and nipples.  Before things get even more dark, Hashbrick returns to take a leak and every thing is happy again... Except it is not.  SpongeBong and Hashbrick take a look in the shower and there is Splintward saying hi to them.  That sounds lighthearted but this version of Splintward is super creepy looking, he has a Shy Guy-esk mask on and a very dead expression. 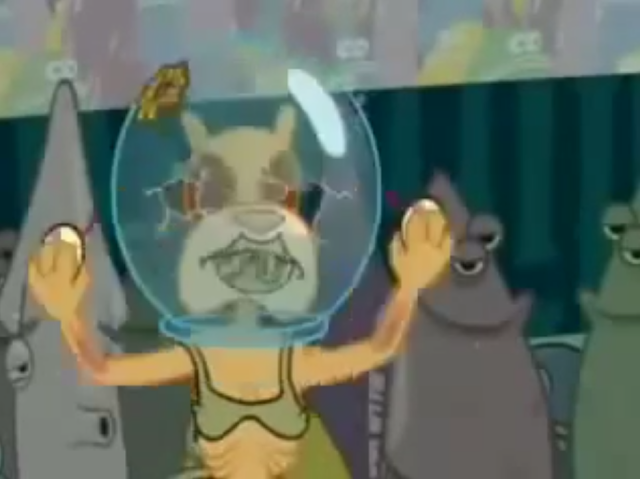 Episode three opens up with SpongeBong and Hashbrick watching TV and eating chips.  The TV reports that Fish ( a parody of the band, Phish) will be playing in town.  SpongeBong and Hashbrick get excited and go to buy some Sea-Shrooms from Splintward.  Splintward has no Sea-Shrooms, so he sends them to a friend that does and this is where we see the terrifying Crystal (a parody of Sandy).  Crystal is a meth-head with messed up teeth, bleeding arms, pointy nipples, is mostly skin and bones, and she is also a squirrel. 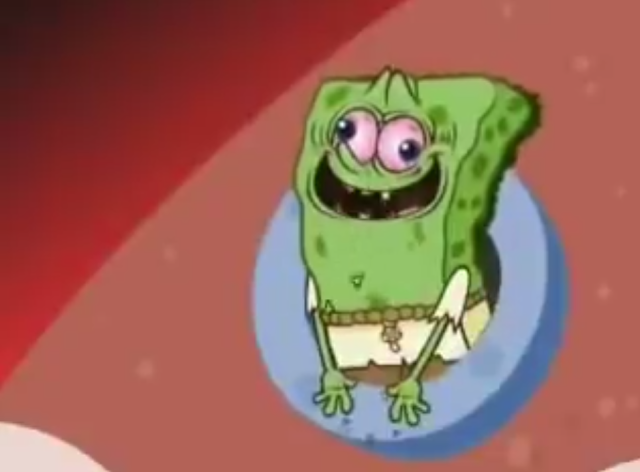 As you could tell, this show is very heavy on the pun based and grossed out humor.  I did find some of the jokes to be genuinely funny, the rest of the jokes gave me a little chuckle but the novelty wore off way too quickly.  This parody was also really creepy at some points but it was never out of context, going well with the drug based humor.  What is super creepy is that the characters don't feel that much different from the real thing and if I saw the actual SpongeBob characters on drugs, they'll almost certainly act like these parody characters.

The artwork and animation have a surprisingly decent amount of effort put into it, well as far as parody animation goes.  The character designs are funny on their own and the animation looks like it's just below television quality but also just above Internet quality.  HECK! It does look like something that you'd see late night on MTV... Okay, that sounds weird because these were meant to have aired on TV as part of a comedy show.  What I do mean is that this animation will blend in well and feel natural coupled with other late night animation.  No, I'm not saying that late night animation is crappy!.. Well, not all of it. =/

I'm starting to over think things now, so let's wrap this baby up.  Overall, SpongeBong HempPants is a funny idea but it's one note jokes grew tiresome quickly.  It's also not the worst thing that you'll see and it is worth checking out at least once.  SpongeBong HempPants gets a just above average score of 5.5 out of 10.  Yes! It is better than some of the real SpongeBob episodes but not by much.  Anyway, I'm Kaiser Sensei and if you didn't like this article, don't hit me, I am not a doobie. 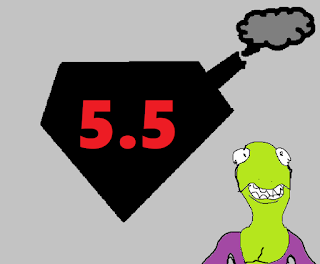