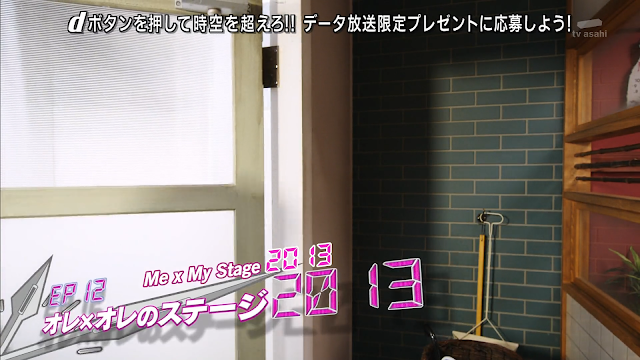 We now go to part two of my summary and review series about the double Sougo saga. 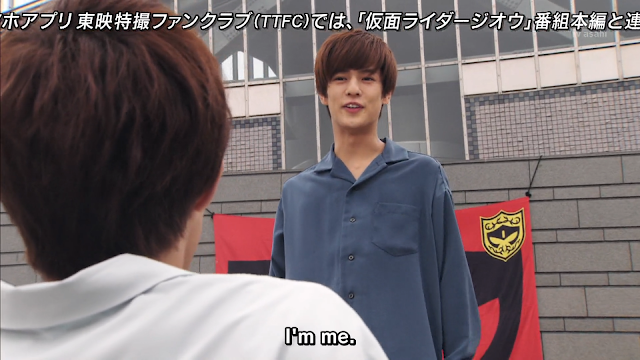 This episode kicks off right from where the previous episode had ended.  Present Sougo meets up with Future Sougo and Future Sougo gets yelled at by Woz and Tsukuyomi for doing something stupid and dangerous, like changing the timeline.  Present Sougo gets caught up in the scolding and is upset that everyone is yelling at him despite him not doing anything.  Future Sougo explains why he is trying to change the timeline, it's because he needs two Sougo's to save Geiz.  Our heroes (minus Geiz) return to home base to where they give both Sougos a tag, so they know which one is which.  Future Sougo gives his report and it's just a recap of episode eleven, nothing new here.  The two Sougo's are really enjoying having each other around but the rest of the crew doesn't.  Before our heroes can rescue Geiz, Present Sougo needs the Kamen Rider Gaim Medallions.

Geiz is still lost in another dimension and he is also very bothered that Kaito sensed hesitation in him in the prior episode, so they get into an argument.  Speaking of arguing, Evil Gaim is arguing with Schwartz about how Sougo managed to find him so easily.  Evil Gaim gets told off and then he storms away.  Something very unexpected happens right after, Woz comes in and offers to help Schwartz and I'm not going to lie, this scares me.  Present Sougo and Tsukuyomi find the place where the medallion is but when they knock on the door, Mandarins drop on their heads.  The person that accidentally dropped the fruit on our heroes goes down to apologize.  Lull and behold, this person is exactly whom Present Sougo and Tsukuyomi were looking for.  Why? It's because that he has the Gaim Medallion.


While Present Sougo is trying to take the Gaim Medallion, Evil Gaim appears and tries to kill Present Sougo.  IT'S HENSHIN TIME, BABY!  Present Sougo morphs into Kamen Rider Zi-O and fights back.  Evil Gaim unzips the sky and two monsters fall out to join the battle.  Zi-O gets thrown not one, but two Kamen Rider Medallions (Gaim and I don't know the other one) and Tsukuyomi informs Future Sougo that Present Sougo/Zi-O has the medallions.  Zi-O tries to power up into Gaim mode but Schwartz appears, beats up Zi-O, and steals the Gaim Medallion.  All hope is not gone, the other medallion lights up and transforms into a mini-robot.  Schwartz sees no threat in this and throws the Gaim Medallion into a portal and the little robot follows (now all hope is gone).  Our heroes are shocked as to how Schwartz knew about where they were.  The reason is because Woz told Schwartz of our heroes location.

Back at home base, Woz is getting told off.  Woz explains that he told Schwartz about the plan because our heroes were messing with the timeline, throwing it out of balance (which makes sense but also doesn't, given the context of the show).  Future Sougo is the only one that understands what Woz was doing and then unexpectedly, Sougo's Uncle walks in with Woz's fixed clock.  Tsukuyomi tries to signal to the Sougo's to hide but Sougo's Uncle sees them and freaks out.  Tsukuyomi pulls a quick one by covering Sougo's Uncle's eyes while one of the Sougo's hide.  The trick worked and Sougo's Uncle blames what he saw on him being tired and then he blames his glasses, then he takes off.  Turns out that Schwartz sending the medallions into another dimension was all part of Future Sougo's plan (now, that makes sense), so they can contact Geiz and give him the Gaim Medallion.  Why?  It is because they want Geiz to give the medallions back to Present Sougo when he gets out of the other dimension.  That's a convoluted plan if I ever heard one.


Kamen Rider Zi-O confronts Evil Gaim and then they get into a fight (no, I didn't skip any scenes, this is what really happens).  Geiz is searching around in the other dimension and he finds a interdimensional worm hole hovering over a canyon.  Geiz thinks to himself for a little bit, then he uses one of the medallions and it transforms into a motorbike.  What happens next is super bad-a**, Geiz morphs into Kamen Rider Geiz and jumps the canyon with the bike and blasts though the dimensional hole, where he is joined up with Zi-O to fight Evil Gaim.

One of the Sougo's (I've lost track of them now) travels back to 2013 and morphs into Zi-O.  This is where both Zi-O's power up into Gaim Mode, do the SGT. Kabukiman NYPD dance, fight both Evil Gaims, and then slice them both to pieces (literally).  All of the missing boy band members are saved, Geiz is back on the team, and every thing is back to normal.  Heck! We get a surprise plot twist!  Geiz remembers to bring some chicken back home with him.  Well, that wraps up the case of Sougo's Uncle wants chicken, a case that started a few episodes back. 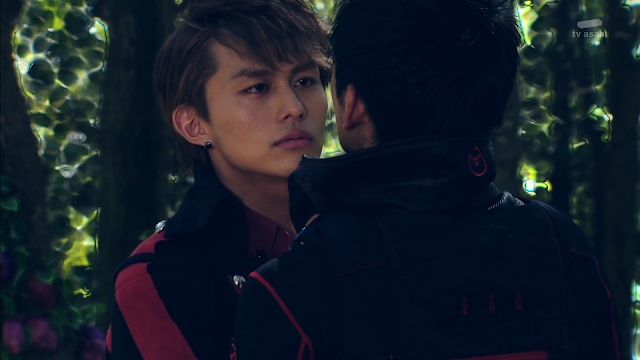 This was quite the entertaining wrap-up to a very entertaining story arc.  I had a lot of fun watching this episode, with it's on point storytelling and fun concept.  Yeah, little to no filler scenes in this one, nor did any of the scenes drag on or got boring.  There were a few things though that didn't make sense to me, such as Woz giving away our heroes location in order to save the timeline.  The reason behind it does make sense but if you think about it for too long, it doesn't.  I mean, this is a show about two sides trying to change history and only now Woz does something about it.  Yeah, it's best not to think about this plot hole for too long.

It's also very nice to see that some of the characters got fleshed out a little more, giving them more meaning to be here.  Sougo is growing into a very fun and lovable character, Woz is becoming more than just a spokesperson, and Geiz is still Geiz (that's not a bad thing).  There are still a few more characters that need more story and lore behind them, and this arc gives me hope that they will do so. 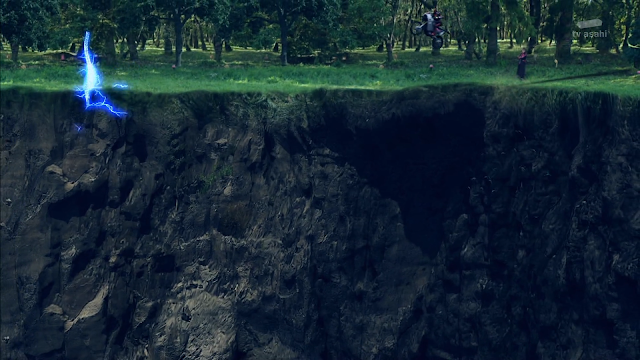 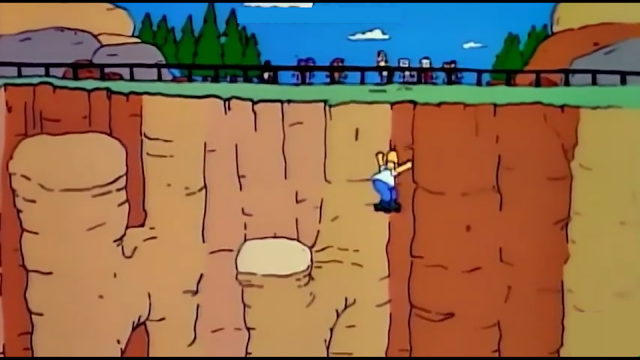 A lot of action in this episode and for once it isn't all just a game of punchies.  You've got some comedic action and some bad-a** motorcycle stunts as well, quite a varied episode indeed.  What made the action better was that it went very well with the story, making for action that actually meant something.  The CG was a bit more well used in this episode too, leaving less awkward looking spots.

Overall, nothing much to say about this one but what I can say is that this is one of the better episodes of this season.  I'm giving this episode an 8 out of 10.  This is also one of the best story arcs in this season, heck, it's the best one so far.  This story arc gets an 9 out of 10.