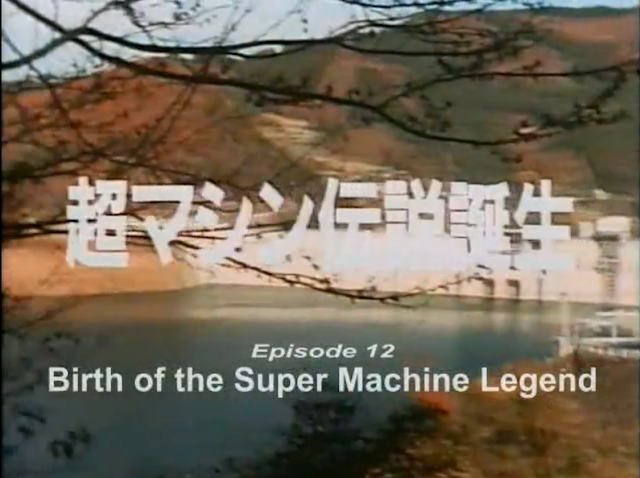 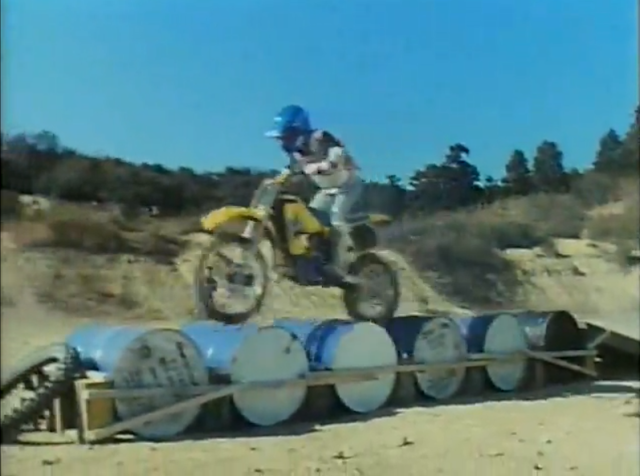 This episode opens up with Kotaro riding his motorbike in the mountains and is reminiscing about riding with his brother.  Suddenly, Kotaro hears a sound of another motorbike and rides to see where the other biker is.  What Kotaro sees is a very talented kid riding a dirt motorbike like a pro.  Kotaro watches for a little bit and by "little bit" I mean that this riding scene takes up about 25% of the episode (no joke).  I'm not saying that it was boring, the motorbike driving is actually quite impressive and entertaining. After Kotaro is finished watching, he goes down to talk to the kid but as soon as he does, the kid and his teacher just bolt off to the hills *cues Benny Hill music*.

Kotaro chases the two into the woods until he comes across a very shady looking house.  Kotaro walks into the house (after knocking on the door) and finds out that the kids coach is also the kids father.  Kotaro also finds out that the kid's father is a famous Motorbike racer named Daimon Akira.  What also makes Daimon so special is that he had mysteriously vanished two years prior to the events of this episode.  Kotaro isn't alone, from a distance he is being watched by a Bat Monster.  Bat Monster likes what it sees, then it flies off to report back to the Golgum. 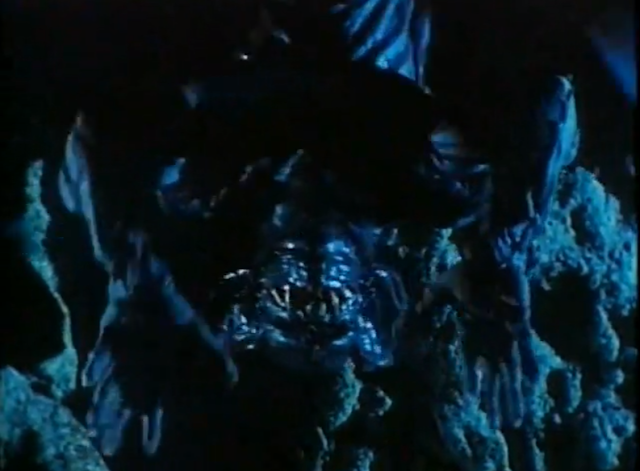 Turns out that there's a reason why Daimon had vanished, he was hiding from the Golgum because he has one of their special motorbikes.  The bike is called Road Sector and he is teaching his son how to drive it.  We are back at Golgum HQ and what doe the Golgum do? Why, they do what they do every episode, Pinky!  They introduce the monster of the week!  This weeks monster is a very creepy beetle that has lobster like claws, a bad case of bed head, and a look of someone who has spent all night drinking.

Kotaro is still searching in the mountains for Daimon but he soon notices that one of the Golgum's monsters is also there searching for Daimon too.  Where is Daimon? He is hiding in a cave and is scared for his life.  Daimon thinks that Kotaro is out to kill him and his son because he thinks that he is a part of the Golgum.  Turns out Daimon is very familiar with the Golgum, they killed some of his family back in the day.  Sadly, Daimon and Son are not alone in the cave, the Bat Monster has found them, so Daimon and Son run for it but double sadly, they are cornered by the Beetle Monster.  The Beetle Monster takes a hold of Daimon's son and threatens to kill him if Daimon doesn't tell the Golgum the whereabouts of Road Sector.  Daimon agrees to tell them where but guess who just happens to jump in to save the day? Yup, Kotaro! 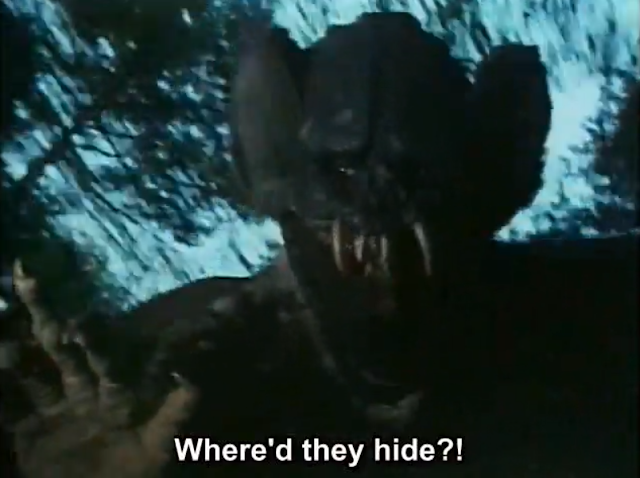 IT'S HENSHIN TIME, BABY! Kotaro transforms into Kamen Rider and starts fighting the monsters, so Daimon and Son can get away.  Kotaro was successful! The monsters were fought off but the Golgum have come up with a new plan, a cheeky new plan that has them attacking Kotaro once he has found Road Sector.  Cutting back to the cave, Daimon is telling Kotaro about his origin story and it turns out that the two have more in common than you'd think.  Daimon's father was also working for the Golgom, actually, Daimon's father is the designer of the Golgum's motorbikes.  Naturally they screwed him over and they also wanted Daimon to be one of their experiments.  Daimon and Kotaro argue about how Daimon is training his son to take revenge on the Golgum.  Kotaro thinks that it is crazy sending in a 10 year old boy into doing something like that.  Kotaro convinces Daimon that Kotaro himself has the best chances of stopping Golgum.  Daimon ends up agreeing and decides to take Kotaro to Road Sector.

We see Daimon, Son, and Kotaro walking on their way to Road Sector but Kotaro notices someone or something rather is following them. Kotaro belly flops into the long grass to hide.  Bat Monster has been following them but before it can do anything, BAM! It gets smacked in the face with a branch thanks to Kotaro.  This knocks the f**k out of Bat Monster, leaving our heroes time to escape.  Daimon drops his son off at Kotaro's hideout and then takes Kotato to a secret room, hidden in a garage and that's when we see the very sexy Road Sector. 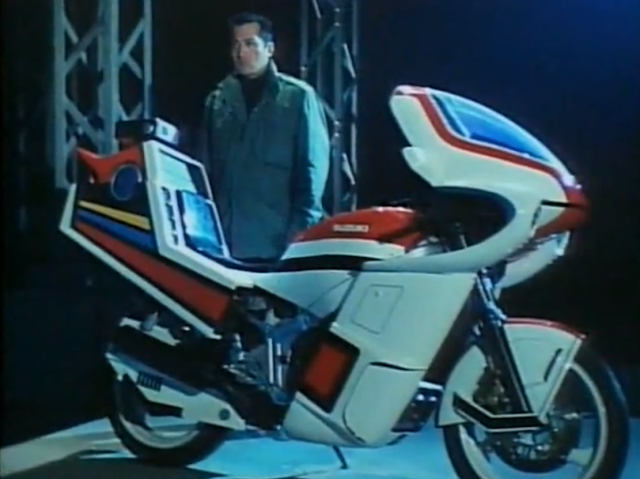 Oh, man does this bike look awesome!  It looks like someone took the Super Hang-On Arcade machine and turned it into a real motorbike.  Although I do find it weird that it has the Suzuki logo on it despite it being a one of a kind alien motorcycle. Hmmm... I think I smell something worse than a Golgum plan and that's PRODUCT PLACEMENT! Okay, that's not as bad as one of Golgum's plans but it is still very evil.  Speaking of that, this paragraph has been brought to you by Tiger Claw Radio! For a good fun retro game podcast, listen to Tiger Claw Radio.

Kotaro takes Road Sector for a test run and he is impressed because it is a very fast bike that goes at a speed of 500KM/h and it also has a protective shield... A PROTECTIVE SHIELD!  Bat Monster manages to kidnap Daimon's son, while Drunk Looking Beetle Monster holds Daimon in a death grip. You know what Kotaro does? IT'S HENSHIN TIME, BABY!... BUT ON A BIKE!... BABY! Yup, Kotaro transforms into Kamen Rider while riding at 310Mph on Road Sector (yes, I did convert the speed for the American readers).  Kamen Rider sets Daimon free but Beetle Monster uses his whip hands (yes, he has whip hands) and starts whipping Kamen Rider.  Kamen Rider has had enough of the kinky stuff, breaks free and defeats the Beetle Monster with only one flashy Rider Kick to the head.

This battle is not over yet! The Golgum pop in with Daimon's son and threaten that they'll kill him if they don't give them Road Sector.  Kamen Rider doesn't like the looks of this and thinks over his choice carefully.  Daimon's son tries his hardest to convince Kamen Rider not to hand over the bike (because he'll probably break his back if he tries to lift it *badumtish*).  The Golgum use their force like powers to lift the bike but Kamen Rider stops them.  The Golgum rush off with Daimon's son and Kamen Rider hops on Battle Sector and starts chasing after them.  This is a very crazy scene where he has the shield up and is just driving though steel crates at full speed.  Kamen Rider catches up to the Golgum Member and drives though him. Instead of splattering the Golgum Member and Daimon's Son, this bike has the power to break physics and logic by transporting the kid into the bike.  Kamen Rider saves the day and also gains a new bike in the process and that's the end of the twelfth episode of Kamen Rider Black. 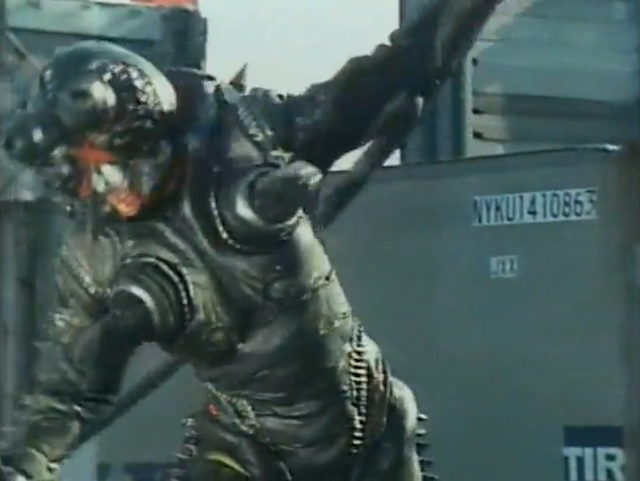 Wow, another really solid episode that also wasn't filler.  I found this to be a well paced episode with the action and drama being used in appropriate proportions.  It's also very exciting seeing Kotaro get a new bike, a really awesome bike at that.  One thing I was disappointed with was that we didn't get any new progress with the Kotaro's Kidnapped Brother storyline. This would've been the perfect episode to push that storyline forward.  I did like the characters introduced in this episode, not only are they likeable but they added something new to the story, giving that extra level of excitement and interest value.

I do wonder if they'll still keep Battle Hopper around after this episode. It's way too soon to get rid of that cute living bug bike.  It was nice that we got to see Bat Monster again and I also liked how they added a new monster as well, making it feel like that they aren't repeating bad guys... Which they are despite that fact.  The Beetle Monster looked decent but I wasn't feeling any threat from this thing.  If you thought that Kamen Rider's attacks were too flashy to begin with, you are best to avoid watching Road Sector's hyper-speed attack.  Road Sector's hyper-speed attack is enough to send anyone that doesn't have epilepsy into a seizure, damn did it hurt my eyes. 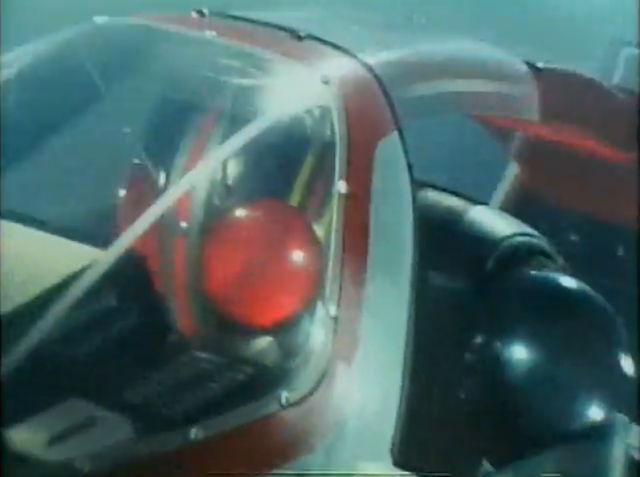 Nothing much going on with the fight scenes but they did focus a lot more on the motorbike stunts.  I really enjoyed the motorbike scenes, they did an excellent job at making the stunts feel fun and special.  Only problem with the bike stunt scenes is that the one at the start of the episode went on for way too long, like I said before, it takes up about 25% of the episode.

Overall, I really enjoyed this episode and I am shocked that I'm giving an episode a score of 8 for a second time in a row.  This is one of the strongest episodes of the show so far and I do recommend giving it a watch. 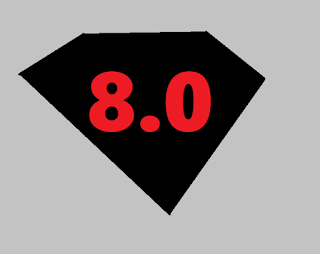