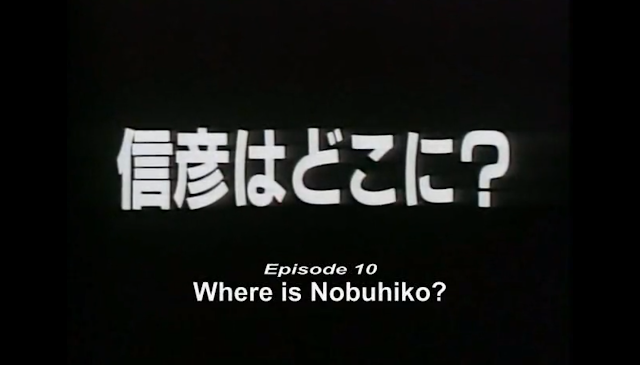 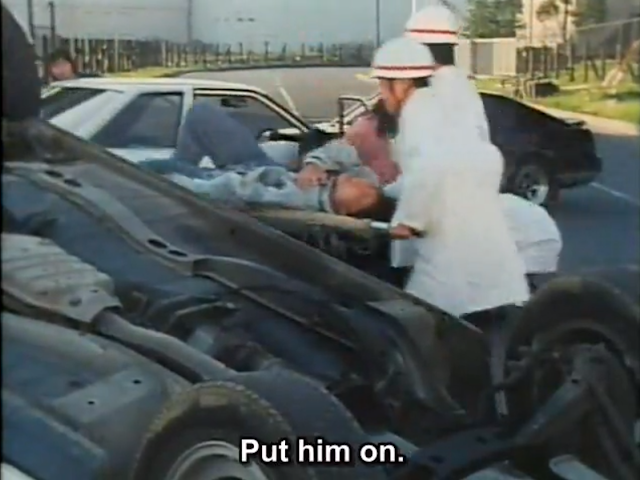 This episode opens up with Kotaro and the gang riding along in a van with Surf Shop Guy.  Surf Shop Guy is the character that scared our heroes with the werewolf mask and then stormed off to go on a holiday back in episode two.  Our heroes notice some crazy drivers on the road and then a ridiculous action movie styled car crash happens.  Kotaro and the gang go out to help the poor man that crashed his car and they also go off to call an ambulance. Before they could make the call they hear sirens, ambulance sirens.  Kotaro thinks that it is very odd that they came this quickly.  Kotaro also finds it odd that the police didn't turn up as well, so Surf Shop Guy goes to make the call to the police.

Kotaro was correct to be suspicious of the ambulances because they were indeed driven by members of Golgum.  So what are the Golgums super evil plans for this episode?  It's quite clever and gruesome actually, they are purposely setting up accidents, where they'll send their own ambulances in so they'll have people to experiment on.  Their plan for the people is to turn them into their soldiers and ship them across the world, so that they can take it over bit by bit.  Yeah, looks like this isn't going to be a filler episode for once.  Their monster for this episode is a Giant Lizard that looks like the old Iguana Entertainment mascot but without  the sunglasses. 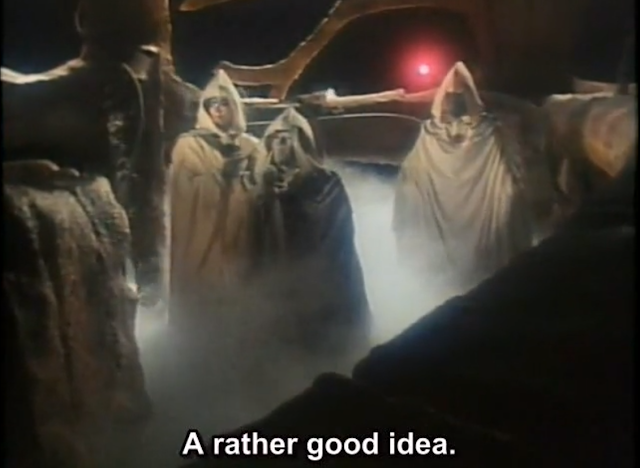 Kokaro goes out investigating and asking people whom he believes that have connections to the Golgum but he doesn't get any answers.  Kotaro does more searching and just happens to run into Golgum members who are kidnapping people at a car crash site.  Kotaro tries to stop them but gets attacked by *cues Soul Calibur 2 Music* Lizardman!  Let the hearts of justice rule over the love of the battlefield. FIGHT!... Great! Now I want to see Kamen Rider in Soul Calibur! Yup, Lizardman starts attacking Kotaro, giving the Golgum some time to get the hell out of there.  It's henshin time!  Kotaro digivolves into Kamen Rider and fights Lizardman off but it's all for nothing, the Golgum have escaped and he has no clue as to where they are.

Now we are at the hospital where the Golgum are, where we see the guy that was setting up the car crashes hanging out with his family and he is named Sugiyama.  One of the members of Golgum comes out to give Sugiyama some praise.  Sugiyama's wife is especially happy, thanking the Golgum member (she doesn't know it's a Golgum member) on how he saved her husband from a crash of his own and also thanking him for giving her husband a new job.  Oh, if only she knew about the job that her husband has got, she wouldn't be thanking him.  This scene also paints a different picture about Sugiyama because he is doing this for his son.  You'd be amazed at the length some people will go for their children, however the poor guy is working with Golgum, so he has no idea what he is in for. 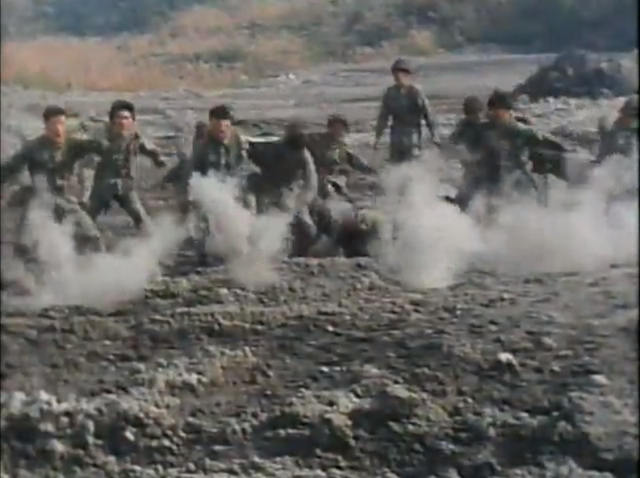 Anyway, how is Kotaro going to find Golgum's HQ? Simple really, he is going to set up a fake crash of his own and hope that the Golgum will find out and pick him up. Kotaro's plan works and the Golgum pick him up, checks him out, and asks him if he'll join their army and all without recognizing that he is Kotaro. Wait? That actually worked? I didn't know that the Golgum were that gullible or forgetful.  Back at the hospital all of the people there are excited that they are going to be part of the Golgum's army.  One of the Golgum's head honchos comes in and tells everyone the details but Kotaro hides, so that the Golgum guy doesn't spot him.  Oh, I see!  The people in the ambulance were members that have never seen Kotaro before.

Now our hero is on a battlefield with all of the other people and they are in full on army gear.  You think that's hardcore? It gets better because they are being put though vigorous training and combat sports.  I'm not talking about Greco Roman wrestling in the mud, they are using knives, guns, and grenades against each other, yeah, it's pretty unexpected and also really awesome.  The training does get to the soldiers and they want to quit but their instructor, Sugiyama ( yes, the same Sugiyama that was setting up car crashes) starts shooting at them and calls them all traitors.  Kotaro steps up and tries to convince Sugiyama to stop what he is doing.  Before something happens, one of the Golgum members show up and is in shock that Kotaro made it into the training ground and then orders all of the soldiers to kill Kotaro.  Kotaro convinces all of the soldiers to stand down but that doesn't do much.  The soldiers get attacked by a sudden lightning and then out comes *cues Soul Calibur 2 Music* Lizardman. 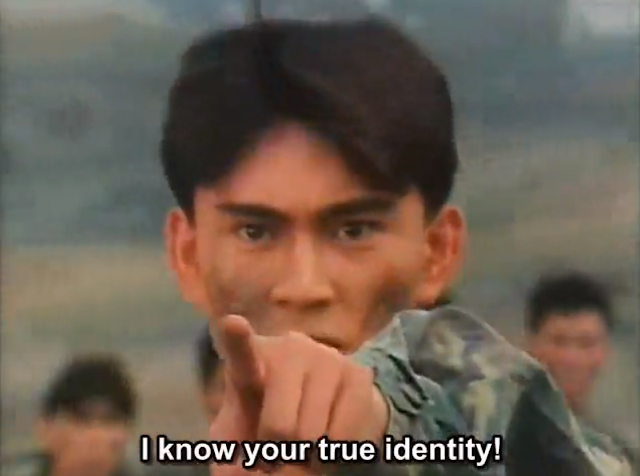 IT'S HENSHIN TIME, BABY! Kotaro morphs into Kamen Rider and starts fighting Lizardman and gets him in a tail grab and starts swinging him around just like Mario does to Bowser in Super Mario 64.  Kamen Rider then chops of Lizardman's Tail (ouch) but notices that it can grow back, leaving Kamen Rider in a bit of a pickle.  Lizardman starts viciously mauling Kamen Rider but Kamen Rider fights back by calling in Battle Hopper to knock Lizardman off of him.  Lizardman starts to run away but Kamen Rider chases him down on Battle Hopper, runs Lizardman over and beats him up and that's the end of *Cue Soul Calibur 3 Music* Lizardman *sobs*.  The day is saved, the soldiers are safe, Sugiyama has been forgiven, and no questions about Kotaro's brothers whereabouts have been answered making this a filler episode in green camo. 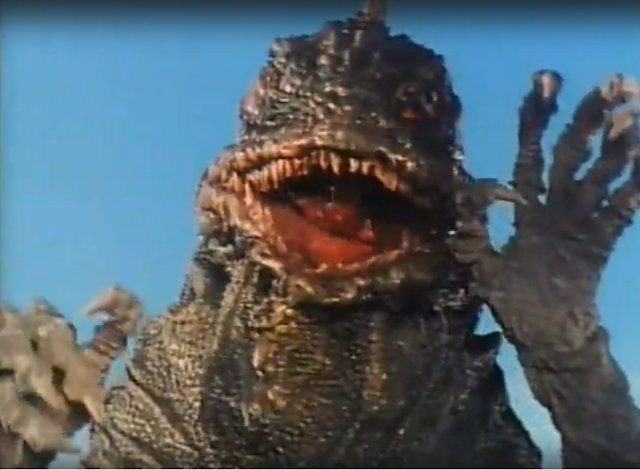 This episode was uh interesting to say the least.  Story in this one felt like two mini episodes combined into one with the first half of the show being a little seed to set up future episodes to come, while the second half was a stand alone story.  Granted, a stand alone story that was set up in the first half.  I did find the Golgum's plan in this episode to be quite smart but I didn't expect them to go in the direction that they did.  I was more expecting them to get turned into monsters and not literal soldiers.  It's quite an over the top turn for the episode and it was incredibly hammy but man was it fun to watch.

The action in this episode is like something I'd see from a Michael Bay movie, there's a lot of car crashes and explosions.  The soldier scenes were full of gunplay, explosives, and hand to hand combat with knives, something that you'd never see in any English live action sentai show.  The fight scenes with the Lizardman weren't that grand except for the part where Lizardman pulls off a really sick spinning kick and Kamen Rider throwing him around by the tail.  Lizardman's costume was also incredibly scary, especially with the close-ups, he has some really terrifying eyes.  A part of me also thinks that Lizardman is out of place in this show and looks like he would be used better in Power Rangers, Godzilla, or Star Trek. 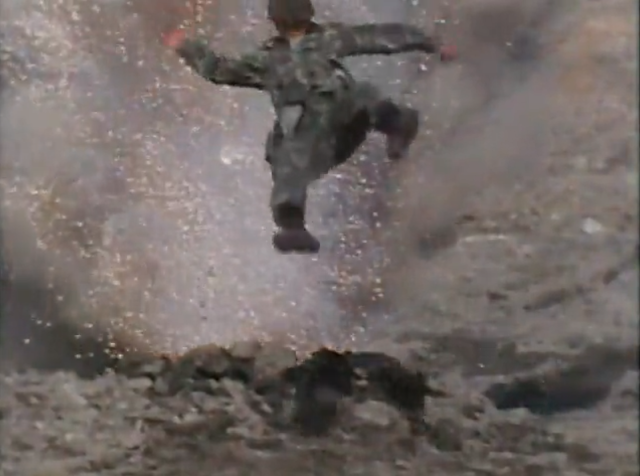 Overall, this episode is a weird and unexpected one but in a very good way. My only disappointment is that it teased that this episode was going to be important to the main storyline, it wasn't though and that sucked.   This is one of the ultra dumb but ultra entertaining episodes that you need to see.  I'm giving this one a 7.8 out of 10.
Posted by Retrokaiser at 11:30 PM