Red Diamond back after a holiday break with another game review. This time around, we have an overhead shooter style of game which is a big through back to the old school high score games. Things cannot get much more basic than Mech Rage but that is not always a bad thing. Does this game offer some simple fun or an unsatisfying experience? Click "read more" to find out. 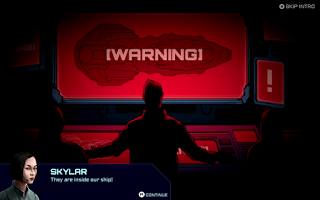 Writing in this game can be described as simple and sassy. The story in this game is simple, aliens are attacking the characters space ship and now John (main character) is in a mech suit fighting them off. Later on, it is implied that your space ship of "unknown origins" may have originally belonged to the invading aliens and they are trying to reclaim it, but the main characters ignore because surrender means death. That's it! Game ends on a forced cliffhanger meaning a possible sequel in the future.


Dialog is mostly between the main character John and a girl named Alexa who is the brains behind the operation and possibly John's love interest. Every stage will have a few moments where Alexa will say something obvious in relation to the stages objective; to which John will respond with something sassy.

Throughout the campaign, you will gradually run into more surviving crew members who all act the typical paranoid act found in most alien invasion scenario. But, for the most part it is just the back and forth with John and Alexa.

As a whole, the story is safe and I can tell someone was having fun writing the conversations. While this type of writing does have a certain appeal, speaking from personal experience, it can get old fast to a lot of people. Nothing offensive is every said and there are some decent jokes, however the basic story makes it hard to get attached to characters so, most dialogue will probably be skipped.

Game play in Mech Rage is just your typical overhead shooter over a 9 stage campaign. 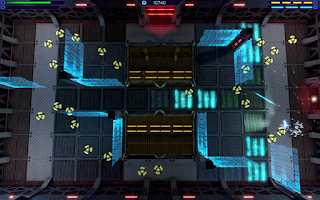 Level objectives are mostly just to defeat all enemies in order to advance to the next room. Once in awhile, they will throw in a challenge like a race against the clock, survive for a set amount of time, or one of many laser mazes. However, for the majority of the game, all you need to worry about is shooting aliens. Levels are mostly linear, but have a few alternate routes that lead to upgrades. Sadly, without a mini-map, these can be accidentally missed.

Controls are responsive enough and work just fine with either a controller or keyboard and mouse. Mechanics are basic, a main weapon that fires like a machine gun that deals minimal damage, a secondary weapon that deals more damage but with limited ammo, and a stamina bar for dashing to help evade attacks and obstetrical. Both weapons have upgrades that can be purchased in-between stages. Health, stamina, movement speed, and max ammo for the secondary weapon have upgrades hidden within every stage. Healing items, ammo, and currency for upgrades can be found by blasting boxes or barrels open as well as defeating enemies. 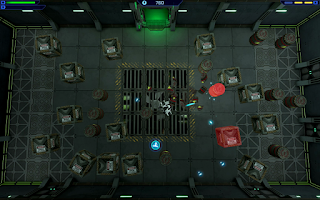 All very basic but well functioning game play styles, however the game does not let you replay old stages without starting a new game which leads to some big issues. Any missed upgrades are lost forever and failure to explore for pick up all currency could potentially get the player stuck behind a difficulty spike due to insufficient equipment. Any currency collected in stage is only kept after completing said stage as well. For the most part, the game is balanced well enough to keep it from being a serious issue and the game is short so starting over would not take long to catch up. However, this issue can catch up once you've reached the final stage.

Overall, game play is solid, but has some noticeable problems.

There is not much to say in terms of the audio in Mech Rage. No voice acting is present, which is a shame given how much talking is in the game. Music was passable, but forgettable. Sound effects are a curious case. Nothing in the game sounded wrong, but some sounds were just missing. Certain explosions, like the player dying, and electric floors were completely silent. This is not a game breaking issue, just distracting.

Visually, the game looks like a spaceship. That is the only thing you will see throughout the game.  The one cut-scene used as the opening of the campaign feels like a moving comic with pictures and barely any movement. 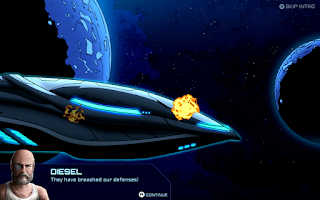 Levels are easy to navigate. Normally, the only form of exploration is guessing which door leads closer to the end and which is a dead end with a hidden power up. 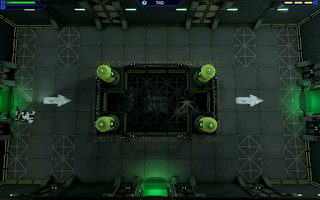 Everything in the presentation is just as good as it needs to be. Nothing is lacking but nothing stands out either.

Mech Rage is a very simple game that will not disappoint fans of the over-head shooter genre. However, I cannot say there is anything especially great about it that would attract any new comers either. Most aspects of this game can be described as solid, but not great. The campaign mode will take roughly 2-5 hours to complete depending on difficultly settings and the players skill. For the $10 price tag, it is difficult to completely recommend such a short game. That being said, it was still a rewarding experience to complete. Between the challenging shootouts and the witty dialogue, I can say at least I was never bored.