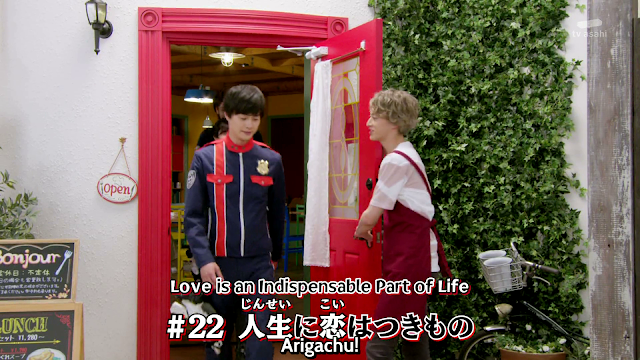 Hello all, Red Diamond back again to cover the 22nd episode of Lupin vs Pat. Last episodes preview showed the episode will be going back to Sakuya's crush on Umika. This time around, Sakuya is going to get love advice from our new Gold/Silver ranger Noël Takao. Sounds like a pretty generic love story. Click "read more" for the full review.

The episode begins immediately where the last one left off with Kogure and Noël Takao still talking after the latter refused to give back the Lupin collection piece from last episode. Instead,  says he will return it in exchange for borrowing another collection piece called Voler Maintenant; Kogure agrees to this bargain. 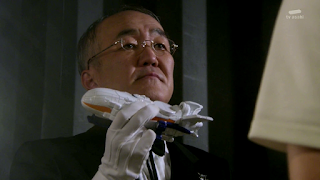 Both of Kogure and Noël Takao talk like they are allies but there is some obvious distrust between them and it is implied that they both know secrets about each other. If there is one thing this new ranger has been good at it is building suspense. 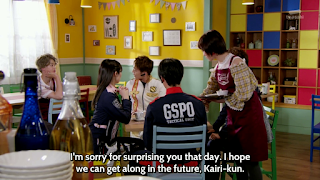 It is here, at the Bistro, that the episode titles implied plot comes into play. Takao takes notice of Sakuya's crush on Umika and begins giving him words of encouragement. Cut to intro.

So far, this episode seems to only exist to establish the new status quo. Not terrible so far though.

Now, Noël Takao, being from the "land of amour" (whatever that means) decides to play cupid between our green and yellow rangers. Frankly, I think he is just in it for the lols. Unfortunately, Takao's plans get interrupted by the new Gangler who turns people into goldfish with his magic flower shaped wand. His collection piece also gives him the power to shoot water as an attack. What? 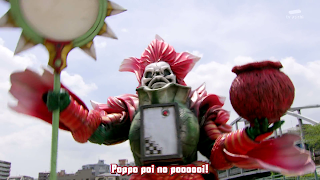 Umika, unable to henshin in front of Sakuya, gets turned into a goldfish herself. I think this is like the 3rd time she's been captured. Once dumped into the Ganglers basket, the captured people change back to normal except much smaller.

Wait, so why even bother doing the goldfish thing? Or better question, why do they change back? Goldfish would kick around a lot less. While in the jar Umika can't henshin and escape in front of the other hostages due to her secret identity. I will as least give credit for avoiding that plot hole.

Sakuya, fearing for the captured people's safety, hesitates to attack and fails to save Umika which allows the Gangler to escape. He desperately apologizes to Tooma and Kairi for his defeat and swears to rescue Umika. All the while, Noël Takao feels responsible because of his meddling with their relationship. He may actually care about the Lupinrangers.

The 3 patrangers split up to the 3 locations the Gangler is most likely to show up in. Sakuya is visited by Noël Takao who tries to apologize for causing Umika to be there when the Gangler attacked. However, Sakuya doesn't blame him and instead gives a nice guy speech about how he failed to protect Umika and all he cares about is getting her back despite what she may think of him. 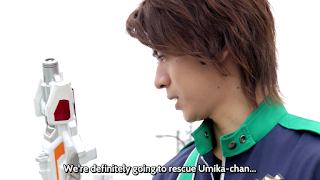 This touching moment is interrupted when the Gangler appears at their location. Coincidence the monster shows up at the story focused characters area? Yes...

The gold and green Patrangers henshin up with the other two being called for backup. In the middle of fighting the Gangler, Sakuya and Noël Takao intentionally gets themselves shrunk down in order to try and destroy the jar from the inside out. They succeed, everyone is safe, and the red and blue Lupinrangers show up to steal the collection item.

For the rest of the fight, everything plays out completely one sided for the Lupinrangers. The monster is defeated, then made giant, and a big robot is summoned like always. This time, Lupinred and Lupinblue summon the VS Vehicles Fire and Thunder to combine with the X train for a new creation. The red and blue Lupinrangers don't help pilot X Emperor Slash only summon. Not explained why Noël Takao couldn't just summon all 3 mechs himself. 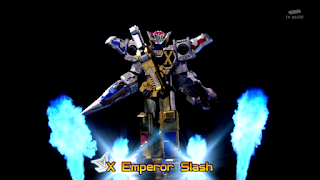 Finally, the new gold and silver megazord is born. Just like every time a new giant robot combination is formed, it completely over powers the monster. Except, the main villains send Destra to help as they watch this new Gangler struggle. Since when do they care? All Destra does is summon another one of his giant golems. This turn of event gives Noël Takao the perfect excuse to show the X Emperor's other form. 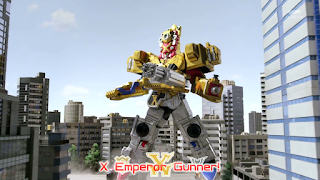 X Emperor just flips upside down and transforms. Was this duel form mech the only reason the writers had Destra help this one random time?

Noël Takao defeats both opponents with two different finishers (one for each form) and bids their life and adieu.

The episode ends with Umika thanking Sakuya for saving him and calling him a "nice guy" before leaving. Which, Sakuya takes as being friend zoned and it ends with him whining about it.

This episode was alright, but mostly filler. The plot was pretty recycled and really only served to introduce X Emperor and to establish the status quo between Noël Takao and how he must act around the Lupinrangers when they aren't in disguise. Other than that, nothing really not worthy happens in this episode. Nothing bad, nothing great, just an ok experience overall. 3/5
Posted by Cendoo at 9:00 AM