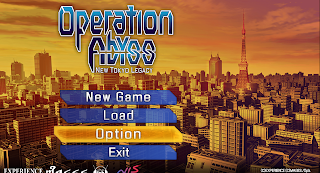 I have always had an affection for old school first person dungeon crawlers, but they are definitely bigger in Japan than they are in North America. Today’s modern dungeon crawler, with a few choice exceptions, is a very anime experience. The anime element in this particular game is really strong indeed. 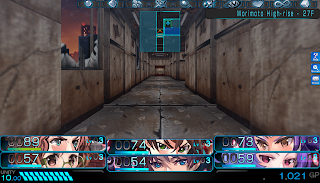 Mechanically, this game actually mirrors Wizardry quite closely. You create six player characters in town and get them equipped, then go into dungeons and kill monsters. You have the trading post to buy gear, the temple to get healed up, the training grounds to train new players. However, this is an anime sci-fi adventure complete with gifted high-school students. Consequently instead of Boltec’s Trading Post we have the Development Lab. Instead of the Temple of Cant we have the Medical Lab and instead of the Training Grounds, we have the CPA Headquarters.

One of the aspects I really liked was that there are several different locations to visit. Dungeons Crawlers traditionally have one giant maze for the player to explore. This time, you are exploring many different mazes with different backdrops and atmosphere. 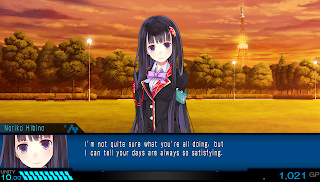 The item management is disappointing. It should be a really simple thing to see what equipment each player has and go buy replacement gear from the shop as you advance through the game, but the developers really botched this aspect. It’s cumbersome to review gear and even more cumbersome to buy new gear. On top of that there is a crafting system where old gear can be scrapped to make new gear. This is a good idea in theory, but I have not yet been able to get a handle on how this works. Be ready to look up some guides on this portion of the game mechanics.

Do you remember in Dark Souls how players could leave comments on the floor to help and direct/misdirect other players? Operation Abyss has this same feature in it’s dungeons, but it will allow you full control over the text you leave, so consequently players have left exact coordinates for the next step in each puzzle. It’s a neat idea, but I felt like it was ruining the game. Thankfully these can be turned off.

I’m not much of an anime guy, and the cutesy aesthetic can be overwhelming, but in this case, that is the packaging used on a super solid dungeon crawler with lots of content, a steady ramping difficulty curve and lots of places to explore. This is a solid dungeon crawler that took me back in a big way. Despite its quirks and its flaws, I had a really good time with it.