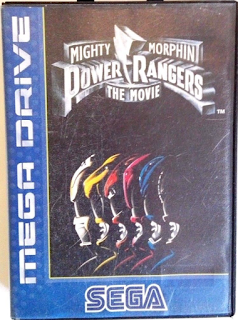 One really long week ago (a week that has lasted a month and a half) I took a look at the second of the hand-held releases of the Power Rangers Movie game.  That's all in the past now because the future is fucking here.  We're in the 16-bit century now; full of mode seven, blast processing, parallax scrolling and other awesome features that use silly words.  Kicking it off the rim first (bruh) is the Sega Genesis release.  Will it top its Game Gear brother?  1. Who cares.  2.  Let's find out shall we.  (Click on "Read More" to read the full review.) 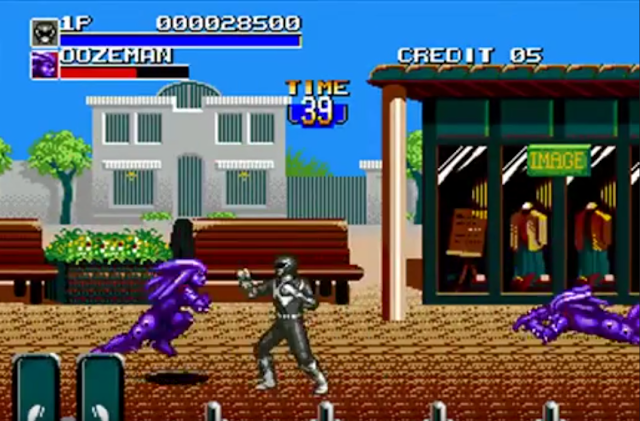 Surprise, surprise.   Minus some very minor story errors, the story for this version follows the plot of the movie near perfectly.  Ivan Ooze is free and has attacked Zordon.  Now it is up to the Power Rangers to gain some new powers and kick Ivan Ooze's gooey booty.

The downside to the story is that only the start and end of the game cover the Power Rangers Movie. The entire middle of the game is an adaptation of season two of the show.  There is also a huge missed opportunity.  After level two has been beaten, there's a cut-scene that spoils over half of the movie.  Yup, it takes an hour of the movie and turns it into a two minute cut-scene.  A lot does happen in the movie and it would've been awesome to have that story used as levels instead. 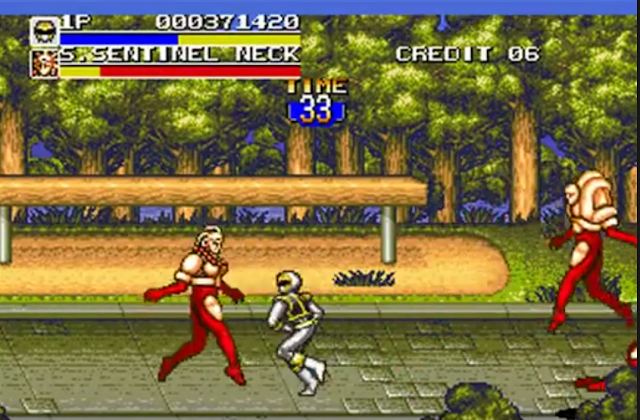 When it comes to the gameplay, it's mostly a paint by the numbers beat 'em up.  You walk around beating up the bad guys all while trying not to die.  I make that out to sound negative, but it is done well, making for a fun time.

There are two different kinds of levels.  One has you fighting goons such as the Putties and Oozemen in the art of hand to hand combat.  The controls are basic, yet smooth and all so responsive.  This game does throw in a few gimmicks and distractions to make the game seem less repetitive.  Some levels have stage hazards, like cars that will drive across the levels.  They can damage you and the enemies, so be careful.  Another type of gimmick/distraction is that one stage will have you trying to find the correct secret room. (Yes!  A level with multiple secret rooms.)  It adds in a little deepness to the game, but only a little.

The other stage type has you fighting giant monsters while you are piloting the Megazords.  These levels are even more simplistic and enclosed.  The gameplay is spiced up by giving the Zords completely different move-sets from one another.  Yes, there are different playable Zords and they are all worth playing as.  These levels are much deeper (although that's not saying much) than the non-Zord levels.  You'll need to use an incey wincey bit of strategy in order to defeat the giant monsters.  This also goes for some of the non-giant monsters.  Other than that, you can just mash your way to victory.

This game gives you five credits to start off with.  Despite that it's a very beatable game due to all the health power ups and extra credits that are dropped by defeating baddies.  Any body that has even the slightest bit of average gameplay skills can beat this game.  (HEY! Why are you looking at me?)  The real difficulty is with the pacing issues.  The length of the levels are inconsistent and all over the place.  Some levels will be so long that they over stay their welcome.  Some will be soo short to where if you blink, you'll miss them.  Don't worry.  Some levels have a satisfying length. (That could also be read as an innuendo by the way.)

Lastly, some levels will feel like lazy re-hashed versions of previous stages.  This'll make you think that the game has reset itself.  This pacing problem effects both kinds of stages and is this games biggest flaw.  It will test your patience. 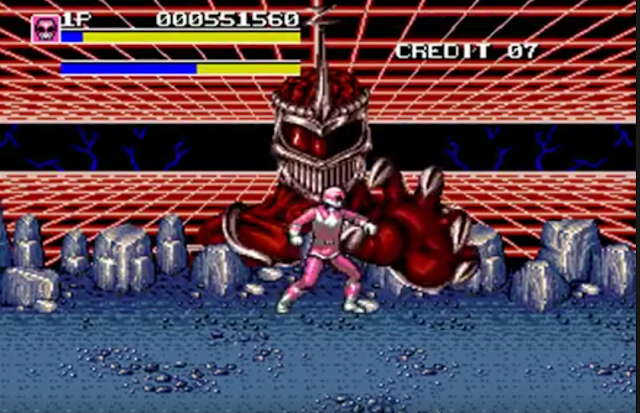 Awesome sprites? This game has them.  Wonderfully re-created 16-bit versions of the heroes and villains from the show and movie.  I dig the detail on most of them as they have enough effort put into them to make them pop.  This goes double for the Megazords as they look great and they also have awesome effects when they use their moves.  Granted, the graphics aren't perfect by any means.  Pay too close attention to the Power Rangers and you notice how most of them are just re-colored versions of the same sprite.  Well, Pink Ranger does have a skirt and White Ranger has his armor, but take them all off and you've got the same sprite of some muscle bound dude in spandex.

The backgrounds and levels also look fine, but most of the time they don't go well with the atmosphere.  Most of them felt like that they were made for another game completely and feel out of place being in a Power Rangers game.  Backgrounds for the Megazord fights are very awesome and works well with the atmosphere.  Sadly, the Zord fight backgrounds also look like they were made for another game. 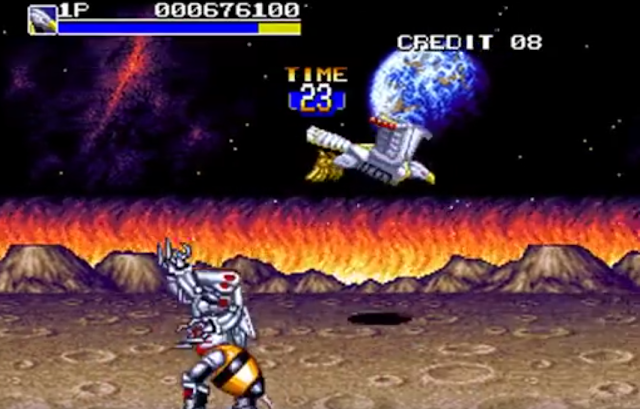 Soundtrack is pretty good with a high adrenaline bit fueled rock track that gets you pumped.  There are some exceptions, sadly.  Some of the tracks sound generic and dull, but most of them won't ruin the mood.  The one track I was super bummed about was the Power Rangers theme song.  For whatever reason, it sounded like that it was recorded on a broken machine.  With hideous sounding blunt and repetitive beeps. I thought the soundtrack was glitching out, but nope.  This rendition of the main theme naturally sounds like a broken record.  It's embarrassing!

What isn't embarrassing are the sound effects.  You get a lot of powerful sounds that really emphasize the action.  There are also voice clips and while they are a bit on the fuzzy side, they are super audible and sound really good. 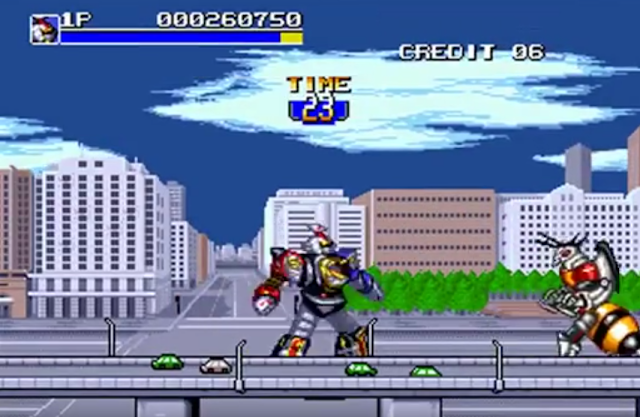 Overall, it's a very flawed, but decent beat 'em up that should be played by Power Ranger fans and gem finders.  Now if only it had just that little bit of fine tuning, it could've been an all-time classic Genesis game.  This game gets a 6.2 out of 10. 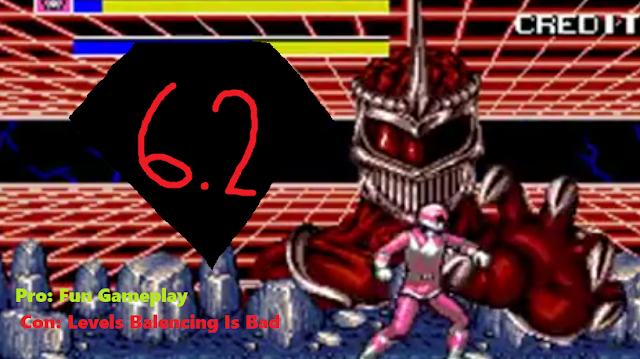 Posted by Retrokaiser at 1:01 AM