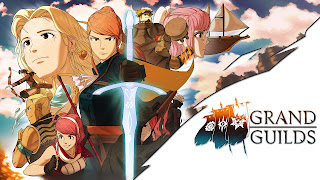 Look out, we got a kickstarted game here. Grand Guilds appears to be a tactical rpg that plays on a grid and uses cards for actions. Reminds me a little of Metal Gear Acid. Visuals look very anime and not overly detailed. Looks a lot like an app game. I can tell this was an indie passion project. Honestly, I find these types of games to be very addictive, but this title looks very basic. Going back to what I said earlier, I think Grand Guilds would have made an excellent mobile title, but probably just an okay console/PC release.

A co-op action adventure game with cute and colorful graphics. This is definitely a title for the multiplayer fans, and probably best locally or with friends. A lot of the puzzles shown in the trailer look very basic and the game appears to be trying to use the synchronized movement gimmick as its main selling point. My prediction, this game will develop a small cult following and satisfy a certain niche, however, I doubt this title will leave much of an impact on the gaming community.

Back again, another One Piece Dynasty Warriors style game. Being a huge fan of Dynasty Warriors, you'd think I'd be hyped by this title, but Pirate Warriors 3 didn't do much for me. Anyway, this is a hack & slash style game based on the popular anime One Piece. Anyone familiar with, pretty much any Warriors game will know what to expect. Good game, it will be talked about a lot. This will be one predictable release, updated mechanics and more characters/events that come from a further point in the anime than the last title had.

An interactive movie game with choices made over live action video. I never thought I'd see another one of these outside of Netflix. While watching a movie, you make choices that determine how the story progresses and who lives/dies. The acting and setting look good, it looks like a well funded thriller film. Sadly, I think watching a let's play will be the same experience and that will defiantly hurt sales.

A remake of Persona 5 on the same console that will add a lot more content. Persona 5 was one of the best games I've played on Playstation 4 and I was expecting a remake in the same vane of Persona 4 Golden. However, I am shocked to see it on the same console. (Granted, the original was released on both PS4 and PS3.) Despite that, I am beyond hyped for this title. The Persona games are some of the most engaging and addictive titles I've ever played and I will definitely be checking this one out.

That's all for this week, and for the first time I actually had more than 5 titles worth a mention, but I stuck to my rules. There is also a lot of interesting DLC and ports coming out this week so, this will be a good week in gaming and it makes me reconsider how these articles should be structured. Until I figure that out, this is Red Diamond, signing out.
Posted by Cendoo at 11:27 PM