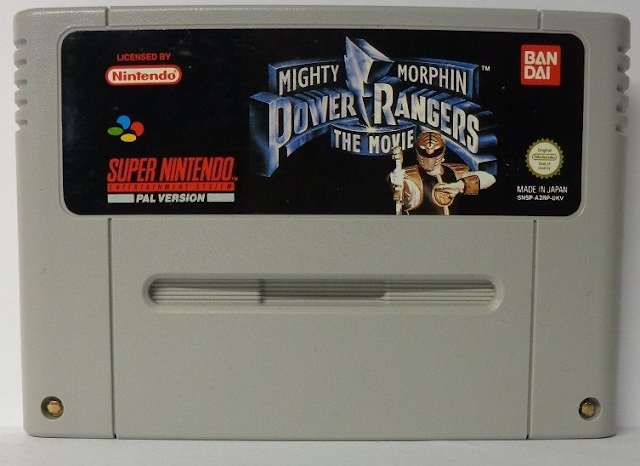 We're finally here! The fourth (and final) part of this month long journey covering the video game adaptations of the Power Rangers Movie games.  If you haven't read those previous reviews yet, you must do so right now.  I command you to!  They are pretty great!
Now that you're done reading them (or giving me a free view because you pity me), we are at the most crazy, insane, and bat-sh*t game out of the bunch.  This is the Super Nintendo version and oh, boy.  (Click on "Read More" to read the full review.) 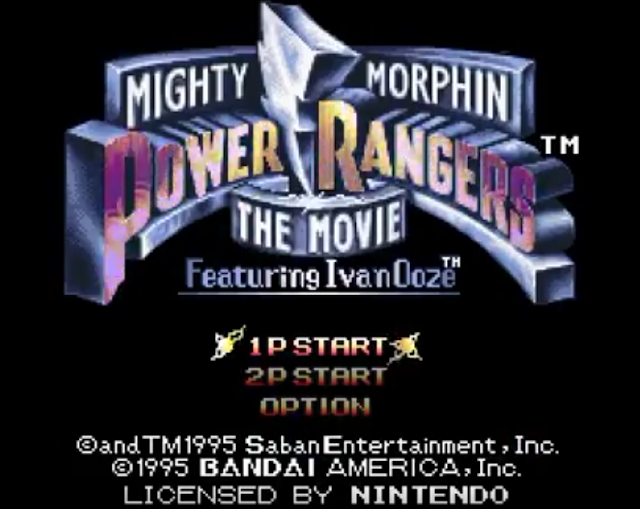 This game though, ohhh this game doesn't even try to put in the effort to connect it to its source material.  Hell, it doesn't even try to be a game based on season two of the show. The box and label may say that it's Power Rangers The Movie, but what you get is way more phoned in than a modern day Brock Lesnar match. 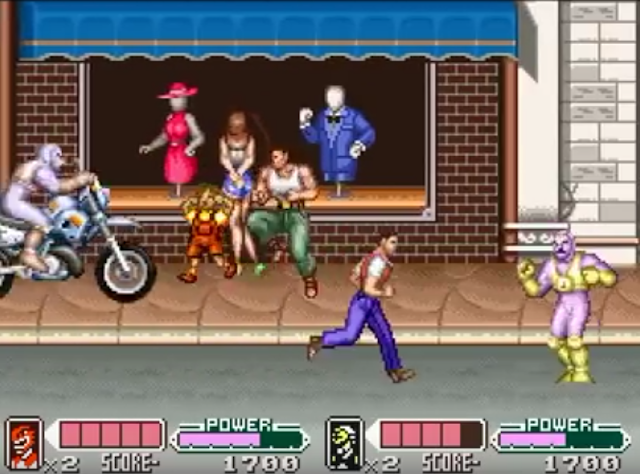 For starters the game is called Mighty Morphin Power Rangers Movie featuring Ivan Ooze.  That's a big red flag if I had ever saw one.  Now on to the story.  The story in this game is about... uhhh... ummm...  The story in this game is about nothing really.  You are just the Power Rangers and you must stop evil from taking over the world.  It's super lazy, although 99.9% of people playing this game would already know who the Power Rangers were and what their goals are.  Having a bunch of cut-scenes explaining a grand plot isn't all that needed here.  However this is also a game based on the movie and it would've been nice to have more of a connection than what we got here. 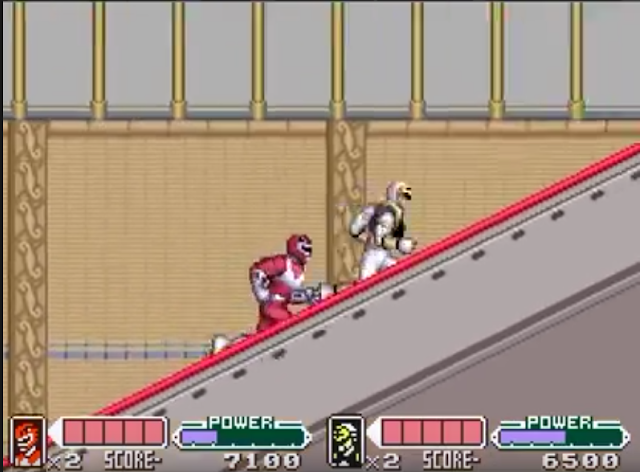 The style of the gameplay is quite easy to sum up.  It's a side scrolling beat 'em up where you play as the Power Rangers.  Movement isn't quite as deep as the Sega Mega Drive version, nor is it as restrictive as the Game Boy version.  The stages are typically made up of two layers that you can jump between.  It's more fun than it sounds.

There are two difficulties in this game, normal and hard AKA hard and harder.  This game finds ways of kicking your teeth in.  The stages are long and filled with baddies and level hazards.  You also start off unmorphed to where you need to fill up a power meter by collecting lightning bolts.  Once it fills up, you can morph into the much more powerful ranger form.  Re-fill the power meter by collecting more lightning bolts, so you can launch a screen clearing attack.

After spending what seems like a mild amount of time getting powered up.  You'd think that it'd be enough to kick some ass.  Nope!  You still need some skill to progress though the levels.  The standard Putties are easy to take care of but the other baddies and some of the stage hazards make it tough.  Other than Putties, you fight weird robots that look like something right out of The Terminator and feel very weird being a part of a Power Rangers game.  You also fight Putties with weapons such as pistols, bombs, and professor Putties with electrical shocker shocks. 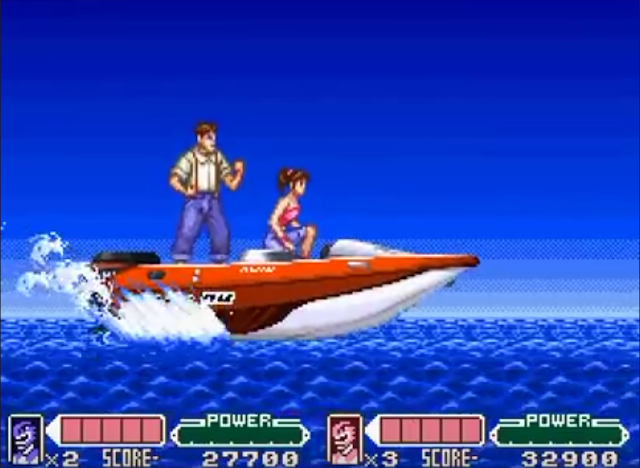 The theme of the levels are just as crazy as the bad guys.  You'll fight in locations that you'd never thought you'd see Power Rangers fight at.  Such as burning shopping malls, cruise ships, and army bases just to name a few.  The peak of the insanity that this game provides has to be the snow themed stage.  It has snowboarding, avalanches, and water rafting.   This isn't the typical Power Rangers game for sure.  Feels more like a really big budget G.I. Joe episode.  Not even Zyurangers reached this level of crazy (although it did get pretty close).

Once you've gone though all those bad guys, obstacles, and hazards, you'll have to defeat a boss.  The boss will be the typical monster of the week that you'd find on the show.  The bosses aren't exactly the most difficult, but with all the damage and lives lost from just trying to get there, you'll be fighting them with caution.  Losing a life will have you re-spawn in the same location that you had died.  However, run out of them and use up a continue will have you restarting that level all over again.

Toughness aside, it is quite a fun and playable experience.  I enjoyed beating up baddies and seeing all of the insanity that this game had to offer.  Controls are very smooth and responsive.  There's no save system, so running out of continues and having to restart the game does get very tiring.  There is a cheat code that helped to make the game slightly easier.  No, not a level select code but a code that makes you stay in Power Ranger form all the time.  There is a two-player co-op mode, but sadly all of my friends are digital. 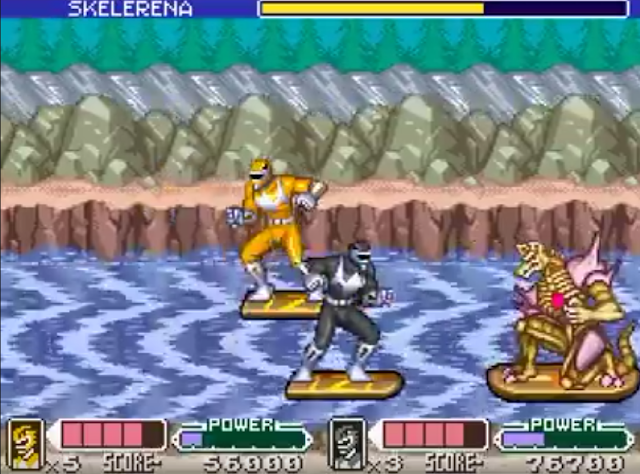 Graphics are really awesome.  The sprites are bulky art looks good.  The levels are weird and big, with a lot of awesome variety and fun details.  The coloring on the characters could've been a little more vibrant, they do look a little washed out.  This won't be the best graphics on the Super Nintendo, but they are decent to say the least.

Most of the animation is decent, but you do get some real rough looking animation that will put you off.  It is mainly with the attack animation and it is very noticeable.  On the bright side, Billy dabs his enemies to death.  Dab them haters, Billy.  Dab them all... TO HELL! 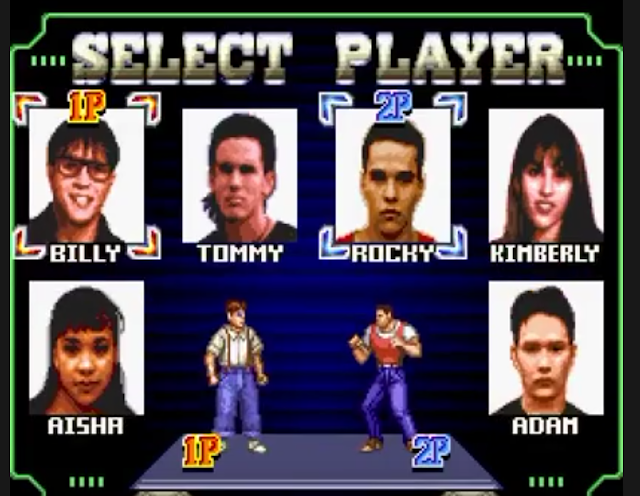 The character select screen has got to be the most laughable character select screens of all time.  It uses photos of the cast, but the photos all look like that they were taken from police mugshots.  Which means that the Power Rangers in this game must be saving the world because it's part of their community service.  The oddest picture of all has to be Billy's.  There's something odd, weird, and unfamiliar with it.  The reason is because they used a picture of Billy from the pilot episode.  I don't know why they did that.  You don't know why they did that.  It just happens that the devs did that. 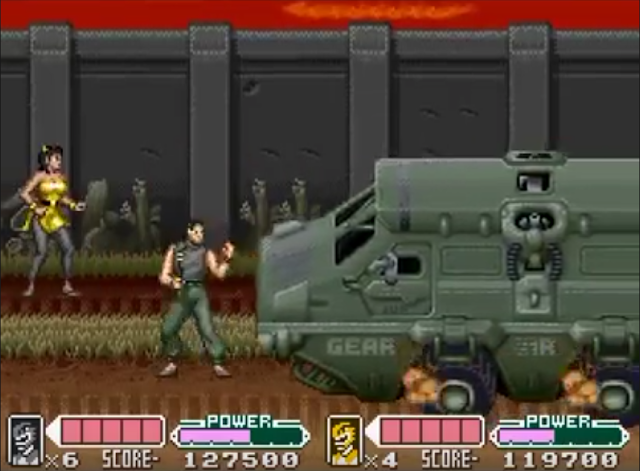 Music has a very upbeat, high energy bit-rock tune that works very well with the game.  It helps to give it a fun and serious mood, despite all the crasy zhit that happens on the screen.  (Yes, I did say "crasy zhit" on purpose.)  The sound effects make the moves feel very impactful with its deep and satisfying force.  (Get your minds out of the gutters.) 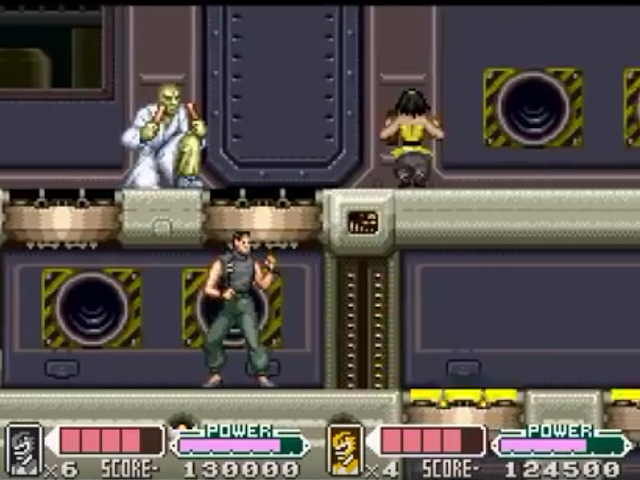 Overall, this game is very tough, but has an okay amount of fun factor.  If rentals were still a thing, this game would be worth the weekend.  I wouldn't want to own it though.  Mighty Morphin Power Rangers Movie featuring Ivan Ooze gets a 6 out of 10. 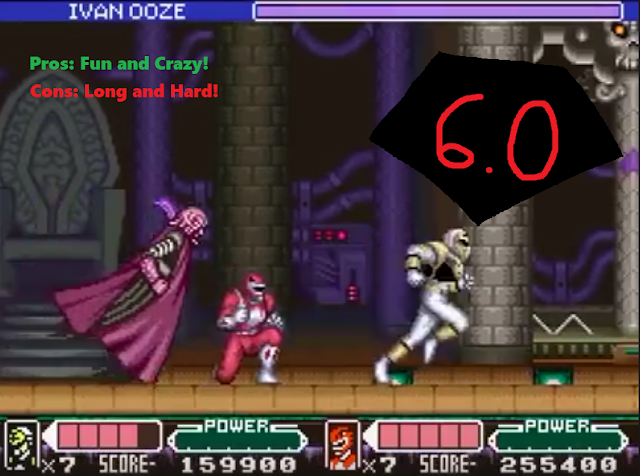 Posted by Retrokaiser at 2:51 AM