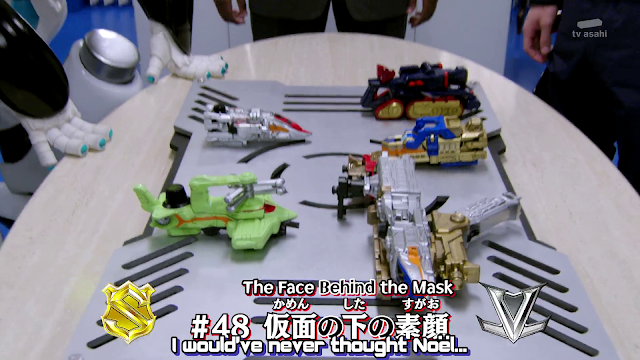 It is time for the final countdown with only 4 episodes left. This is the episode that has teased the big moment of the Phantom Thieves revealing themselves. What will that lead too? Click "read more" and let's take a look.

The episode begins right where the last one left off with Noël Takao being handed off to the Gangler leader, Dogranio as a trophy.

Noël Takao questions Dogranio about why he stole the Lupin Collection and killed Arsène Lupin, and Dogranio says it was just him wanting to take interesting stuff. After hearing this, Noël Takao gets enraged but is electrocuted. Dogranio says since they are already going to kill Noël Takao, then they should make a show of it. That's ominous.

Cutting away, the Lupin Rangers are contemplating what to do about Zamigo as well as the difficult decision on whether or not they should abandoned their Bistro to protect their identities. Umika is the only one to object. She has really liked living/working at the Bistro and wanted to keep doing it with the Police as their regular customers even after they save their loved ones. However, before anyone can respond, GoodStriker bursts in and tells the three of them about Noël Takao's capture. Cut to intro!

It is obvious that Umika's speech is also a reflection of this season. Their status quo is about to break, things will change for good, and their story is coming to an end. Most, if not all, seasons have a scene like this and they can be tearjerkers.

One theme song later, the Patrangers are also trying to plan their next move to save Noël Takao. Jim Carter attempted to track Gauche's movements, but Gauche suddenly appeared on their monitor as well as live on every screen in the city. 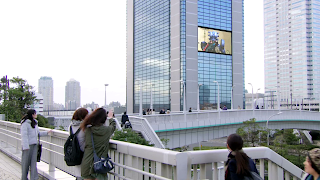 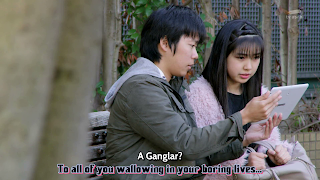 Is that a thing? Can you force a live feed onto tablets and other smart devices?

Over the air, Gauche announces that she is going to dissect Noël Takao live. Basically, a public execusion.

Kogure tells the Lupinrangers to abandoned Noël Takao since he already gave his collection pieces to the Global Police and that is broadcast is an obvious trap. Also, Kogure reminds him that Noël Takao was always willing to die in order to bring back Arsène Lupin and reminds Kairi, Tooma, Umika, and Goodstriker that that was the pledge they all made. I won't live to see the day that a Sentai team actually does decide to abandon one of the Rangers for the safer route. This leaves the Lupinrangers in a conundrum.

Elsewhere, the Patrangers have no such pledge and rush at the chance to rescue Noël Takao even knowing it is a trap. 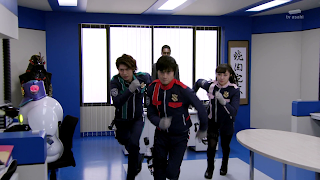 Ultimately, the Lupinrangers also mobilize because Kairi gets Kogure on a technicality. Since Gauche has collection pieces, it is their job to go after them. 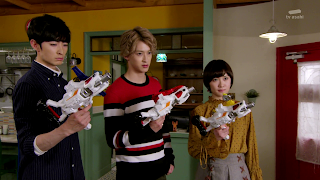 Beautiful moment. Keiichiro's team doesn't care about the danger and wants to save their comrade. Kairi's team has the same desire but are more cleaver about it. Both of these outcomes could have happened from past Sentai and I've missed these clashing personalities.

Now we arrive at the scene where Noël Takao is tied up on a cross. Totally not offensive! The Patrangers arrive first and quickly enter a desperate battle for rescue against Gauche and some Pordermen with Dogranio watching. There are a lot of slow motion explosions and the Rangers put up a good struggle. Sadly, Gauche is still too powerful for the Police and they are knocked out of morph. 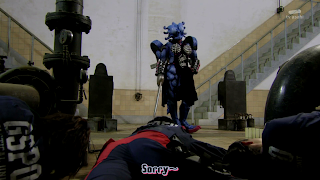 Gauche winds-up her sword to cut Noël Takao open, when the Phantom Thieves arrive. Dogranio stands up and demands the Phantom Thieves reveal their faces on live TV, stating that if they defeat Gauche unmasked then he will release Noël Takao. If they were holding a gun to Noël Takao then this threat might make sense. Noël Takao pleads with the three of them not to remove their masks, but they make their decision. 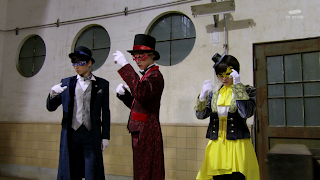 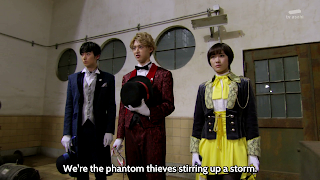 Sad music plays, and just like that it is all over. Sakuya and Noël Takao are in tears. Tsukasa and Keiichiro are in shock but not surprised. And, all the people watching are baffled; Kogure looks heartbroken, and Zamigo is excited. However, the Phantom Thieves break the motion by saying their usual catchphrases and henshining up. 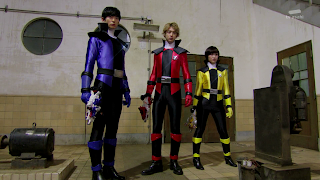 Even through in a helmet-less shot just to say yeah, this is happening.

The Lupinrangers fair a little better against Gauche, but are still struggling. At this point, Goodstriker sneaks in and helps the Patrangers rescue Noël Takao. They use Goodstriker to fuse and get the drop on Dogranio and Noël Takao then un-fuse when Dogranio tries to knock them back so that only Keiichiro takes the hit and Tsukasa and Sakuya cut Noël Takao free. Admit it, that was kind of cleaver.

Gauche summons another Gangler for help. 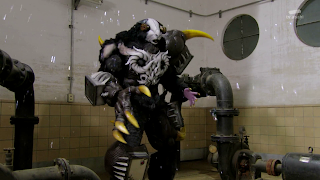 However, Dogranio starts acting funny. He complains that Gauche isn't doing things on her own and then uses his own power to steal all the collection pieces from Gauche and this new Gangler. 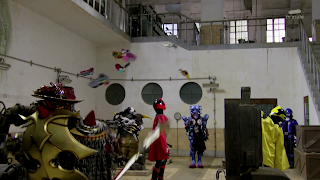 Dogranio says he wants to see something interesting without showing any concern for the fact that he just took away Gauche's advantage.

Earlier in the episode Zamigo said that Dogranio was starting to act like his old self. I guess he was a psychopath before a calm mob boss. 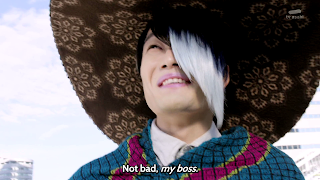 Gauche is left speechless and defenseless, but the Rangers don't even bother taking her out. Instead, the Lupinrangers rush outside to check on Noël Takao. Now it is time for the awkward confrontation. 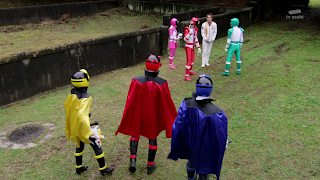 Not much is said before Gauche comes outside to finish the battle. (But we did get to see Sakuya giving Umika the cold shoulder.) This time we don't get a fight but just a clash of both sides finishing blasts. 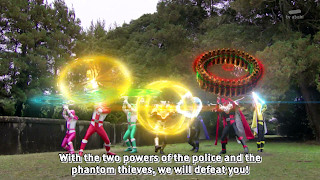 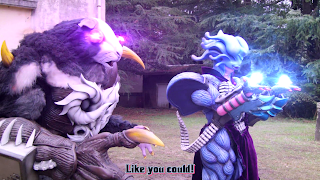 The result is a giant explosion that leaves only the Rangers still standing. However, with the last of her strength, Gauche rips off her gold safe and sticks it on the Gangler she summoned. Gauche dies and this Gangler grows giant. Keiichiro is too injured from the blow he took saving Noël Takao, so, the Lupinrangers take the giant battle. This fight is interesting; the Patrangers offer support fire from the ground and we get to see some of the giant battle from their point of view. Ultimately, the fight doesn't last long as the Lupinrangers gain a quick win after a barrage of their massive arsenal they've acquired. Sadly, no victory poses this time because the Lupinrangers are now forced to flee since their identities have been revealed. 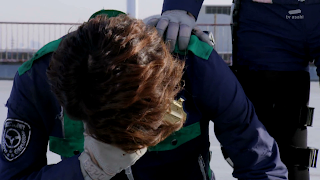 In a more adult show, this would have been the day that Sakuya's selfless ways ended. I know how it feels to trust and be burned so, this one was a pretty powerful scene for me.

This episode was emotional. Umika's speech foreshadowing the end of the status quo was strong but expected. The unmasking was painful for Sakuya and he was the optimistic of the group so it is sad to see him broken. A main villain, Gauche, was defeated. Dogranio seems to have lost his mind and also acquired a lot of power from the collection pieces he took. Which is scary considering Dogranio was already pretty strong. Between that and Zamigo's new powerful abilities means that the Rangers are in for one heck of a fight. Good cliffhanger.

However, there is one problem with this episode, the unmasking didn't make any sense. There was no reason that the Lupinrangers had to give into Dogranio's demand to reveal their faces. No threat on Noël Takao or immediate danger that forced their hand was present. It was almost like he just asked them and they did it. Especially considering that they just ended up in a brawl like they were planning to do anyway. Honestly, if they just put a blade to Noël Takao throat or something then that scene would have made so much more scenes and actually have been a strong moment for the Phantom theives.

Overall, this episode was really good. But, it could have been great if not for one stupid mistake. 4/5
Posted by Cendoo at 5:25 AM