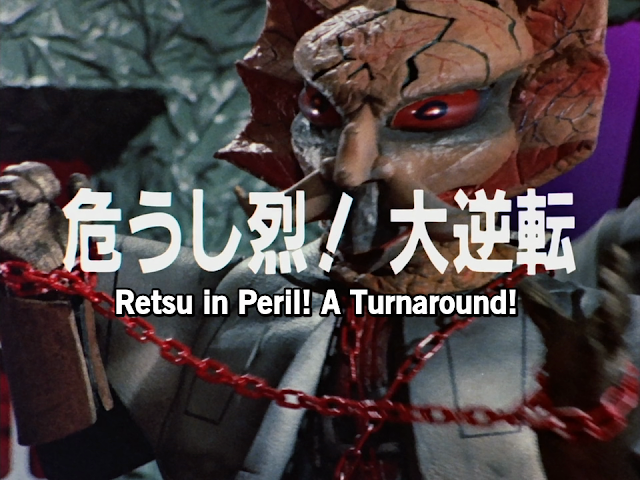 Imprisoned for a crime he sort of committed, a Doubleman is given one chance at freedom. Kill Gavan, or die trying. Yeah, that's it. This episode is 22 minutes long and the entire premise is a Doubleman, the kind you've seen easily die for the last 11 episodes, somehow has a plan to potentially defeat Gavan. Will he be able to do it? Probably not, but let us humor the show and find out.


Overall Opinion: Important lore, but as a whole...not recommended. They take forever to setup the premise of the episode and end it with a cliff-hanger. Except for a major beatdown near the end, every scene was lame and did more to hurt the reputation of Gavan and his friends. At least we get a somewhat 'Part 1' in the show. Most episodes wrap up the conflict within their own episode.

The important lore is the Makuu now have the means to combine Doublemen with monsters. Being the creative bunch they are, the combined creatures are known as Double Monsters.

I wish I can say more than the lazy phrase, 'because reasons', but they seriously don't establish why a specific Doublemen is better than any other option they currently have to defeat Gavan. Currently shackled in the dank pit of despair for not swearing allegiance to Don Horror, Hunter-Killer offers the Doubleman freedom in exchange for killing Gavan. The Doubleman agrees and flies out of the Makuu base to confront Gavan.

The Doubleman Beast attacks an oil refinery to bait Gavan into fighting him and thankfully Gavan shows up to intervene. Gavan beats the crap out of him and the Doubleman escapes, vowing vengeance for probably getting his butt whooped so hard. 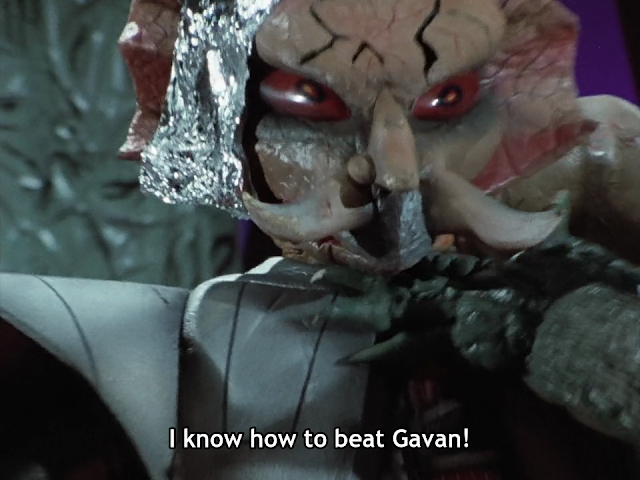 
Desperate to beat Gavan, the Doubleman proposes a plan to Don Horror to merge with a Monster-Of-The-Week and combine their powers for maximum coolness power. Don Horror agrees and they set forth to steal a scientist that just so happens to be making a device that is capable of combining items like a foot with a mouth. The Makuu do the typical scheme of threatening the scientist's family to make the device for them and they transform a walrus looking monster with the Doubleman to form...DOUBLE MONSTER!!! 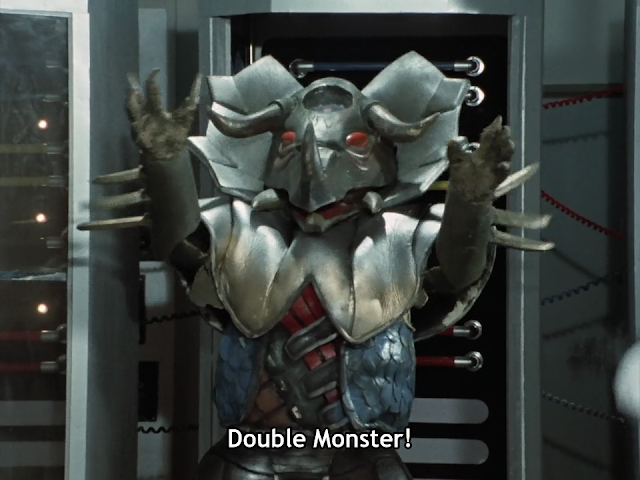 Double Monster ambushes Gavan and would have killed him if it wasn't for plot armor. Here is how bad the fight gets: The monster throws a car door at Gavan while Gavan isn't in his power armor and he just takes the hit like it was nothing. Gavan then activates his power armor and forces the Double Monster to run away after a few of his normal attacks like the Laser Z Beam.

During the fight, the Makuu steal the device used to make Double Monster. It is predicted by Mimi that they'll probably use it again. THE END? 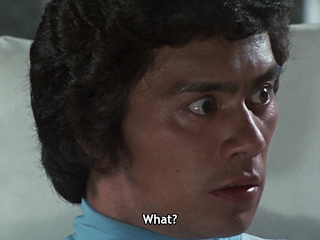 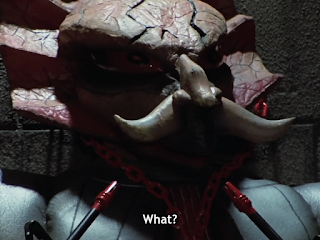 While it is interesting to finally have a (potential) multi-part episode, it was just awful with how it treated the characters. The enemy suddenly gains superpowers with no legitimate reason as to why it occurs and they made Mimi and Tsukikio pathetic as sidekicks. I didn't mention it during the summary itself because it wasn't important, but Mimi and Tsukikio are tasked with defending the scientist's family. When the Doubleman shows up, they both faint. So far, they have never done anything that cowardly. It is a disgrace to their characters to have them be knocked out of the situation that easily. This seriously upset me because if they allow that sort of nonsense, what else will they impose on the characters to speed up the plot?

They brought a new tool to the show with the Monster Combiner machine and instantly made every character lose credibility. The show writers really messed up on this one and is a bad omen for future episodes to come. Let us hope they don't ruin the series.
Posted by Roy Kingston at 11:26 PM