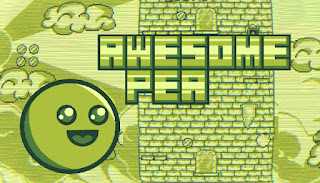 Is this pea really awesome or should it be canned? Let's see in my review.

Story Synopsis: According to what I could find, the literal plot of the game is that you're a "greedy" pea in search of riches. That's it. That's your whole plot here.

Gameplay: In the same vein as other platformers in the genre, you jump and move your way through really short levels without any checkpoints (not that they're needed, all things considered), collecting coins and diamonds as you go. Levels are a grab bag and many are extremely similar to one another, with the occasional scenery change. There's also a timer, doesn't seem to do much, but nowhere to view your fastest times or how quickly you complete levels. No leaderboards either. The controls feel solid, so there's that at least. There's also no unlocks. Only thirty levels of a pea collecting coins, avoiding hazards like spikes, large gaps, frogs, and death pits... And not much else.

Graphics: It looks like it's ripped straight from a nineties Gameboy cartridge and fits the aesthetic and what it's trying to accomplish nicely, however, for the love of God don't turn/keep on the game's CRT and TUBE effects in the settings. I had to turn it off during my playtime due to the headache I began to receive, though this may not happen to everyone. It's a cool thought but not worth it.

Sound: The soundtrack isn't too shabby, if you're a fan of Chiptune styled music. The sound effects of the pea hopping around is gives enough feedback to the player as well so there's that at least.

Final Thoughts: It's not bad in any capacity, but it's still not the most in-depth thing you'll ever play. It's a very lukewarm experience, a run-of-the-mill platformer about a vegetable who hungers for coins and expensive gems. But for five bucks? ...Eh, if you need achievements and you're good at platforming for about roughly an hour or more of gameplay, sure. Go ahead and nab it. 6/10 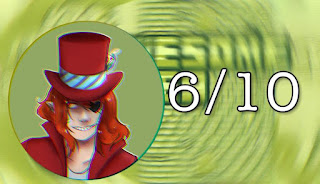 Note: I will edit this with screenshots of the game later, apparently my original screenshots didn't save so I need to take more.
Posted by FenrisTheRogue at 12:39 PM