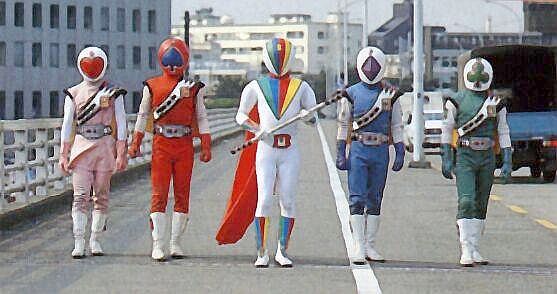 Well this is different, time to look at the second installment in the Super Sentai franchise and the last one to simply be referred to as "Sentai" without the "super". Airing from April to December in 1977 with 35 episodes makes this the shortest Sentai incarnation by far. Long before any type of standards or traditions were established, what will this late 70s deck of cards themed Sentai have in store? Click "read more" and let's find out.

The episode begins with a bunch of toy helicopters emerging from a mountain on an island and flying away. The propellers don't spin, they are just still circle hunks of plastic. 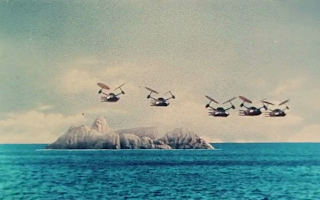 Immediately after, some jets and missile turrets being attacking the 5 choppers and we get to see some air combat that is basically a bunch of cut-away explosions. This battle ultimatly results in the sinking of a nuclear aircraft carrier called the S.S. Sealand. So the choppers were the bad guys?

Oh, forgive me. I seem to have accidentally put in my Cliche' Wars of the 70s tape...

Turns out, this island was actually CRIME island where the antagonist leader Iron Claw is based. Cliche' names aside, that is interesting to see the military actually try and attack the main villains HQ.  It is at this point we get our first look at Iron Claw himself. 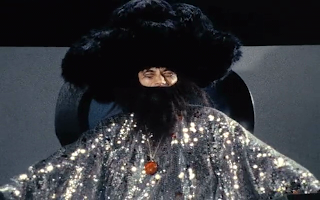 ... No words can accurately express how I feel about this costume choice.

Of course, our fuzzy friend Iron Claw has an assistant in a suit to provide some exposition. To sum everything up, the bad guys are trying to corrupt Tokyo into a city of crime but they keep getting stopped by Kujirai, the head of the Japanese Branch - The International Science Special Investigation squad. Was this written for little kids or by little kids?

The episode then cuts to what is presumed to be the good guys, we see someone with a rodent on his solder giving orders to go investigate a smuggling.

Finally, we get to see the first monster of the week, a bulletproof robot named Devil Killer. That name is trying too hard.

Oh no, is this what the piranhatrons were based on?

Devil Killer quickly kills the investigation team and the overall situation seems to imply that CRIME is winning. So, Kujirai decides now is the time to quickly organize a cyborg team to deal with the rising threat before crime and decay spreads throughout the world. If only they knew. Sorry Kujirai, you failed.

Now the recruitment process. This is the only time I've seen a ranger need to undergo a permanent change in order to obtain their powers. In this case, being surgically changed into a cyborg. Ranger roll call time. 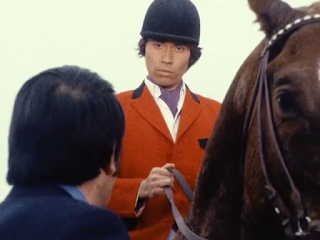 Goro Sakurai: Space Ace. A pentathlon athlete and gold medalist. Unmatched in fencing, track & fiend, swimming, shooting, and horseback. Initally, he refuses to join because he treasures the body his parents gave him and wants to focus on the Olympics while teaching at a University. However, later he changes his mind after witnessing CRIME on a murder spree. Personally, I think he was picked because he already had a red jacket. 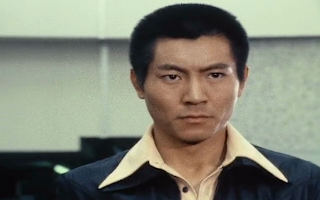 Ryu Higashi: Diamond Jack. The former Welterweight boxing champion of Japan who was unrivaled but suddenly retired and fled overseas after being coerced into fighting fixed matches. He became a nameless hustler in Los Vegas but eventually returned to Japan but was arrested for a murder he didn't commit.  He also refuses to join because he is "not foolish enough to oppose CRIME", but quickly changes his mind. Not really getting what made him a good choice. There are plenty of talented boxers. 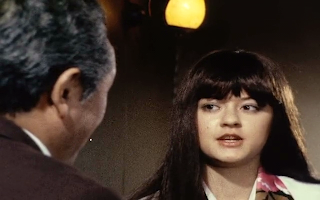 Karen Mizuke: Heat Queen. This cyborg to be is introduced differently, rather than being sought out and recruited, she is given a proper backstory with real motivation. While at diner with her father to celebrate his retirement after 25 years of service as a detective, Karen says she will not retire with him because of her success as a detective herself. While on the car ride home, their vehicle is attacked by CRIME which kills Karen's father but she is rescued by Sakurai. While in the hospital, Karen requests to join the team and become a cyborg for her father.

I have a new favorite Pink Sentai Ranger! But, why was Kujirai at her bedside in the hospital? 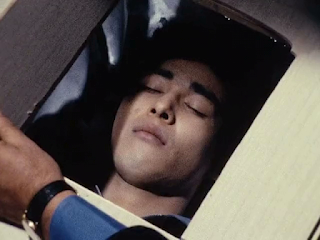 Bunta Daichi: Clover King. His corpse is shown to Kujirai. He was an Oceanogropher who was eager to build an underwater city. Sadly, a freak submarine explosion caused him to die of oxygen deprivation. They give him the cyborg operation which brings him back. That is horrifying! Also, is bringing back a corpse as a cyborg just something they can do? So, so many questions and why not scenarios come to mind.

Sadly, Big One, the white ranger, does not appear until the 23rd episode. Doesn't that technically make him the first extra ranger? A white ranger for the second incarnation that appears more than half way through the season to become the new leader. Sound familiar?

Now, it is time for the cyborg surgery. 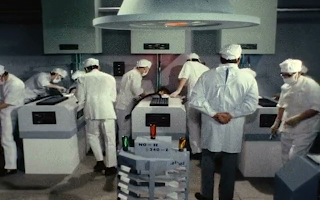 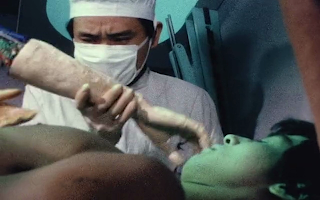 This is making me very uncomfortable.

The surgeries are a complete success and all 4 of them awaken from them completely unphased. You'd think Daichi would have some questions having been dead. They gather at their new base where Kujirai has a new look.

Nintendo is in Super Sentai! Someone alert the Red Cap army, I'm freaking out.

Just as they are formed, another CRIME attack happens, a gold bar storehouse is being robbed, so JAKQ gets their flying ship for the season, Sky Ace. Before giant robots, there were just strongholds in the sky. 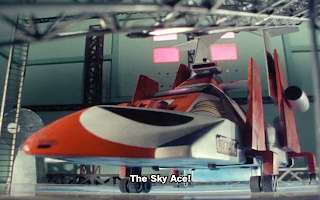 With Sky Ace, the JAKQ shoot down the choppers from the beginning of the episode and proceed to investigate the gold bar robbery. While there, we get to see cyborg powers that lets them see through walls, extends a blade out of the finger tip Inspector Gadget style, and one that somehow measures tire marks to tell the weight of the vehicle. I got a bad feeling the cyborg thing was done for plot convenience. They all return to Sky Ace and use its gold sensing beam. Why didn't they start with that?

Can we just stop and take a moment to appreciate 70s effects? 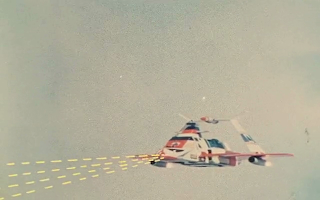 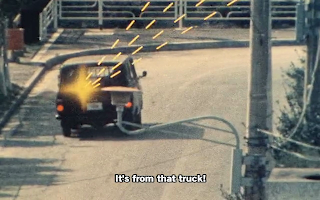 Now, near the end of the episode, it is finally time to morph into the Blitzkrieg Sentai. To do that, they all have to enter reinforcement chambers. This is the longest henshin sequence I've ever seen. Especially compared to the shortest from the last team. 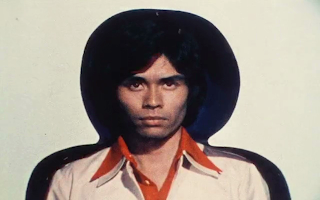 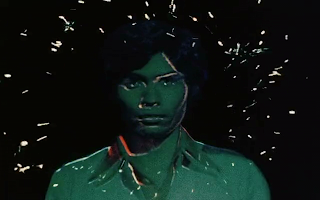 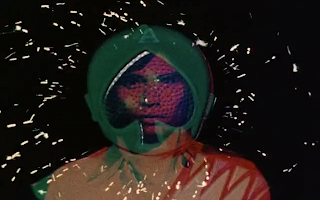 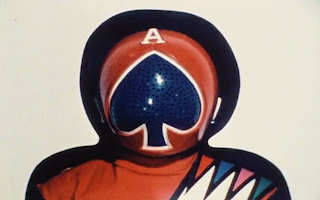 Just imagine them getting into the chamber, it slowly lowering down and moving back, then this long change scene 4 times in a row.

They also have vehicles now. No explanation as to where those came from but it is implied they came with Sky Ace.

They corner the truck where Devil Killer is and we finally get a ranger fight. The fight itself is pretty underwhelming with some bad choreograph. All the foot soldiers have abandoned their machine guns for batons and basically just flail around like idiots. 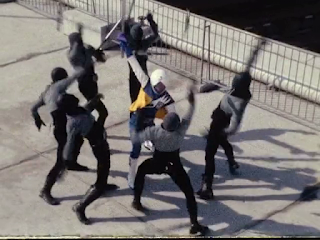 One entertaining moment was finding out the weapon for Space Ace was a fishing rod. 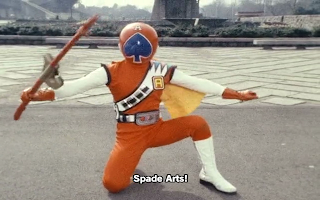 The rangers exchange a few blows with Devil Killer and ultimately finished him off by throwing him in the air and putting their hands together to make him explode. THE END! There was an explanation by the narrator about how they fused their energy into Devil Killer to overload him but it didn't make any less lame.

To describe this episode in one word would be, primitive. There was a lot of exposition, very little action, and the characters were not given equal treatment. Daichi especially, he barely got to speak at all and given that he came back from the dead, you'd think he would have a lot to say. This episode as a whole was not bad, but not too good either. It was not enjoyably bad like Gorenger's first episode, just kind of exists for the sake of set up. I can only recommend this to die-hard Sentai fans or those looking to do some research on past teams. Maybe Big One breaths life into this season, but for now I am uninterested. 2/5
Posted by Cendoo at 12:00 AM