∀kashicforce is a verticle scrolling puzzle game that looks closely related to Puzzle Bobble or Tetris Attack. It's developed by Endless Shirafu, and it’s selling for 12.99 on Steam.

Let’s start by going over what I liked about ∀kashicforce.

The chibi artwork is charming and it has a very promising layout. The title screen and options are minimalistic but look nice. I would have loved to see a Magical Drop game feel this way. 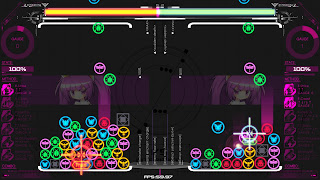 Characters can be selected to go head to head in a vertical scrolling puzzle game where the player must mash the buttons to eliminate as many colored bubbles as possible.

Different selectable characters posses different button combination triggered abilities. This plays similar to a Capcom’s special move mechanics implemented into a puzzle game. This idea is genuinely creative. I was excited to learn these and choose a ‘main’, but the moves rarely worked, despite being listed on the screen. The whole thing seems poorly implemented and broken.


This is really where the problems start. I don’t exactly understand how this game is supposed to work. There is no real tutorial mode. Instead we are given a series of missions which ask us to complete simple tasks, but don’t explain how they are done or how the mechanics work.No matter the difficulty, I would lose against the computer rather quickly, which would suggest there is a key element to gameplay I am missing. However, no tutorial is provided. 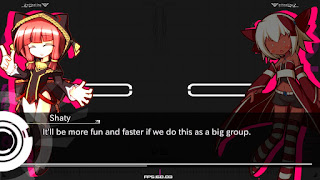 It occurred to me after playing for 20 minutes that players are not even restricted to one side of the screen. You are free to jump to the other side and start knocking out your opponents blocks. I am not sure what the point of this is, but the computer opponent seems to love doing it.

There is also a ‘Channeling’ mode which seems to start a very long, unskippable virtual novel mode. I wasn’t able to sit through it enough to see if there was some sort of challenge or reward on the other side.

At the time of writing this, the all time peek players was 10. Based on these numbers, I wouldn’t expect a thriving multiplayer scene.

∀kashicforce is a bizarre mish mash of ideas which results in a disorganized mess. I still don’t understand exactly how this game is supposed to work.

Magical Drop V is .99 regular price on Steam and has no weird unpronounceable characters in the title. Buy that instead.