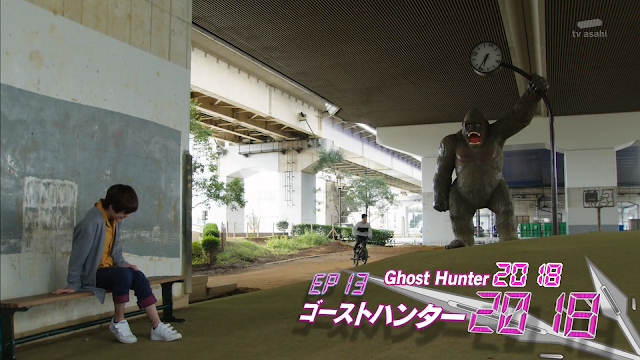 Things in Kamen Rider Zi-O are about to get spooky. (Click on "Read More" to read the full article.) 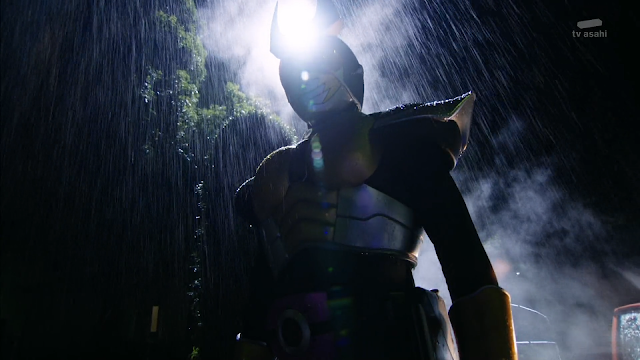 This episode opens up at breakfast time, where Geiz is trying to beat up Sougo.  Tsukuyomi tells them off, then they sit down to munch down their breakfast.  Sougo asks Geiz about how Geiz got the Ghost and Ride medallions. (The medallions that he had when he was chasing down Sougo in episode one.)  Geiz responds with that he stole them from Oma-Zi-O (Evil Zi-O). We cut to very dark and wet scene, where some guy crashes his car.  This is where we meet the bad guy for this storyline, Evil Ghost.  Evil Ghost takes the soul out of the guy who had crashed his car and then absorbs it.  Takeru and Narita run in (our main heroes from Kamen Rider Ghost) but Evil Ghost gets away, then they are faced with some strange looking Kamen Rider.

Woz is still sick of the timeline getting changed, so he goes to the Time Jacker's HQ and joins forces with them.  Now we see Geiz screaming at a King Kong statue at a park, while Sougo sits around.  A bunch of teens on BMXs start riding around the park but they get ambushed by Evil Ghost, who steals one of the rider's souls.  IT'S HENSHIN TIME, BABY! Sougo gets up and morphs into Kamen Rider Zi-O.  Zi-O tries to bust Evil Ghost but can't get a single hit in on him.  Evil Ghost disappears and Zi-O de-morphs, only to be captured by Takeru and Narita.  Evil Ghost returns to the Time Jacker's to get his next mission, while Woz hints to the viewers of who is in his way.  (I forgot to mention that Woz also wants someone out of his hair in this storyline.) 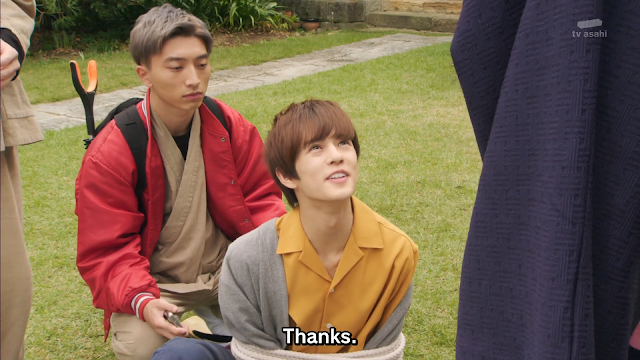 Sougo is getting questioned at Ghost HQ because Takeru thinks he has something to do with some incident that happened three years prior. (foreshadowing.)  Sougo is very confused (naturally) until Takeru's client, Mika, explains everything to him.  Three years ago, Mika's brother was brutally killed by falling steel beams.  Mika believes that the steel beams were dropped on him by a demon.  The demon they are talking about is Evil Ghost!  Tsukuyomi calls to report that an Evil Kamen Rider is attacking, so Sougo and Takeru decide to join forces... Or so they teased.  Right before this team-up could happen, one of Takeru's friends makes sure that Sougo doesn't get untied, leaving Takeru and Co to go on without him.  Meanwhile, Time Jacker Ora is just finishing up a meeting with a mysterious person that has a camera.

Evil Ghost is attacking people at a lab but his attack is cut short. Geiz enters the building and henshins into Kamen Rider Geiz and beats the ghost out of Evil Ghost.  Takeru and Co also enter the lab and see Geiz deal the final blow to Evil Ghost.  Evil Ghost's identity gets revealed and it's none other than Mika's brother, who was thought to have been killed.  (I know, we all saw that one coming.)  Surprise twist happens and it turns out that Mika's brother really is dead.  Time Jacker Uhr pops in and freezes time, then we are treated with an origin story of how Evil Ghost came to be. 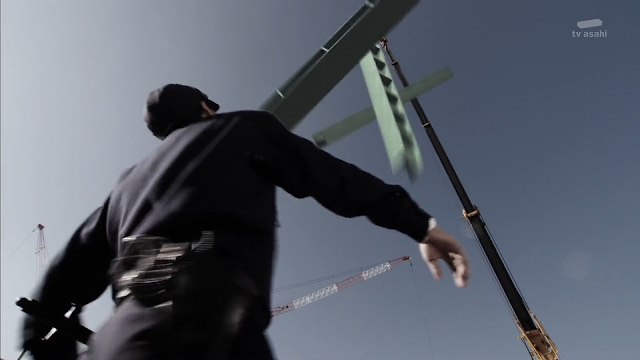 Cutting back to the steel beam fall, we see that Uhr freezes time before the steel beams crash down to the ground.  Uhr offers Mika's brother the power to save Mika's life in exchange for becoming an Evil Kamen Rider.  Mika's brother refuses, Uhr un-freezes time, Mika's brother saves Mika but only to be crushed himself.  Yup, he really did die but this is not where his story ends, it's only just the beginning.  Uhr doesn't care for if Mika's brother is alive or not because he gives his corpse the power of Evil Ghost anyway.  Yup, Evil Ghost is powered by a real ghost.  This story is a lot more dark and morbid than I was expecting it to be.

Uhr restarts Evil Ghost and then takes off.  As soon as time un-freezes, Geiz bolts off after them but only to be stopped mid-chase by that mysterious Kamen Rider from the start of the episode.  The mysterious Kamen Rider is none other than Kamen Rider Agito, who ends up beating up Geiz and then taking off.  The beaten and battered Geiz is met with Takeru, whom then takes Geiz back to his headquarters.  The gang's all here at Ghost HQ and they are trying to figure out where Evil Ghost will attack next.  Thanks to Tsukuyomi's achieve of newspaper reports that haven't happened yet, they find out where to go. 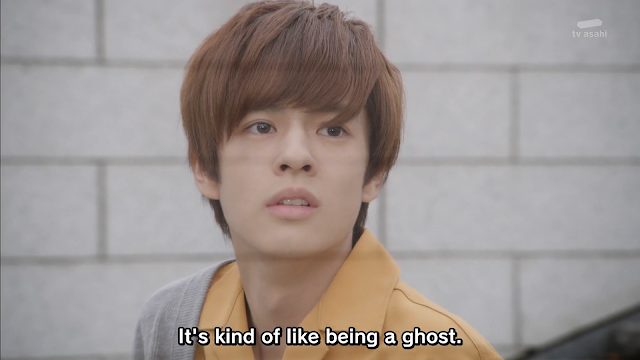 Evil Ghost is violently attacking a crowded courtyard, where he is showing no remorse.  Our heroes turn up and it's DOUBLE HENSHIN DOUBLE TIME, DOUBLE BABY!  Sougo and Geiz morph into Kamen Riders and try to stop Evil Ghost by convincing him to break free of his evil power.  None of the talking is working, Uhr just gets in the way with his words, so Zi-O and Geiz need to use force.  Zi-O and Geiz power-up into Wizard (Zi-O) and Gaim (Geiz) modes.  Uhr keeps on trying to interfere but Zi-O Wizard summons a little robot to shoot machine gun bullets at him.  Zi-O Wizard changes his armor and becomes Zi-O Ghost, where he gets the upper hand that desperately needed.  Our heroes go for the finish but Uhr interferes again and reminds them that if they stop Evil Ghost, Mika's brother will be dead again.  Our heroes hesitate, only for Agito to come in and attack them.

Kamen Rider Agito has a new trick up his sleeve and transforms into Kamen Rider Hibiki.  Yup, looks like that this wasn't the real Agito after all, but a new and exciting bad guy instead. (I'm calling him Fake Rider for now.  It's better than Kamen Kamen Kamen Kamen Kamen Chameleon.)  Fake Rider and Evil Ghost beat up Zi-O Ghost, then Evil Ghost kills Sougo by sucking out his soul from his body.  Takeru manages to stop Evil Ghost from consuming it and blasts Sougo's soul out of his reach.  The bad guys get away, Sougo is now a ghost and only Takeru can see him.  An ending that would've been shocking, if it wasn't spoiled in the episode's preview. 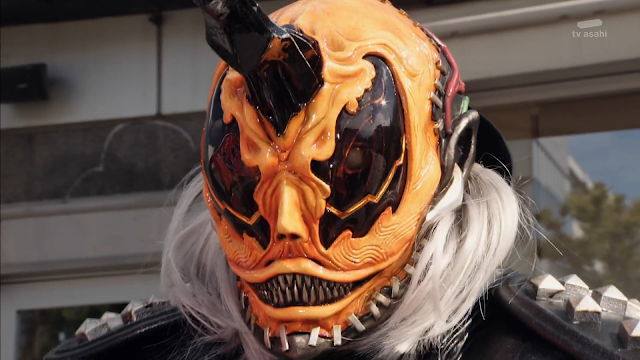 The story in this episode is very basic but also incredibly interesting.  The characters are growing more, the main plot is thickening up, and the crossover itself was handled very well.  If you skipped the summery, the crossover for this storyline is with Kamen Rider Ghost.  Yes, that does mean that there's a bit of a supernatural element in this episode, a very light one at that.

The Kamen Rider Ghost characters worked incredibly well with the Zi-O ones, the teams felt very natural working together.  There was no point in the episode where I thought that the crossover felt forced. What I didn't like about the story was that the big plot twist was spoiled in episode twelve via the episode preview.  If they had kept the big plot twist a secret, it would've make for a much stronger moment.  Some of the things that happened in this episode were also on the predictable side.  This episode also becomes quite dark and morbid in some scenes but it is nothing in poor taste.  Actually, they were used appropriately to show that actions have consequences. It doesn't feel like a one dimensional super hero show. 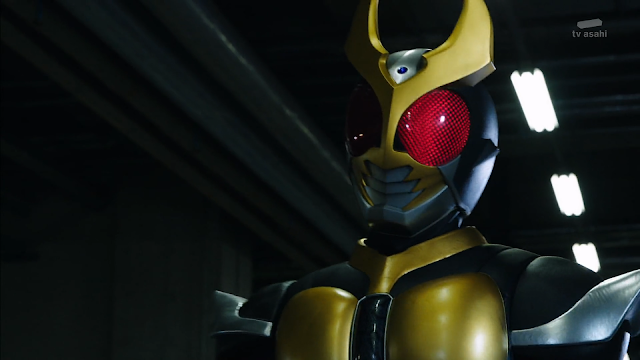 The action in this episode is all thriller and no filler.  It's not just that, this and the story were also incredibly well balanced, making for really effective storytelling.  Anyway, back to the action.  This episode has the best action scenes out of the show so far.  There's some really exciting fights that not only look good, they also added to the story.  This is also quite a violent episode and one that's not afraid to show death, adding on to that non-1D feel.  One person brutally dies from being crushed by steel beams, while the main bad guy for this storyline (Evil Ghost) builds up quite a big body count from murdering civilians. (YIKES!)

We also get a new Zi-O villain introduced, a Kamen Rider that can also change between the forms of old Kamen Riders.  This new villain is also a bit more advanced that Zi-O and Geiz because he has an upgraded version of the transformation system.  He is also very interesting and I am curious to see how he'll be used in the future.  Then again, I could be wrong and this could just be a character from a previous series that's only appearing in this crossover.  Either way, still an interesting character.  The costumes of this Fake Rider and Evil Ghost looked really good and matched up with their personalities well.

Overall, really fun episode that not only provides a good crossover but also pushes the main Zi-O storyline forward.  I'm really looking forward to seeing how this storyline concludes.  I'm giving this episode an 8 out of 10.  HAH! I only just got that they chose to crossover with Kamen Rider Ghost on the thirteenth episode. 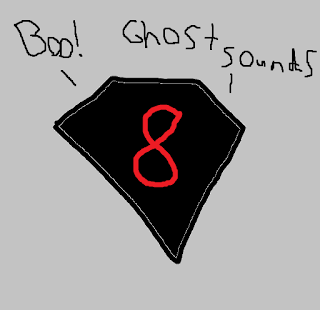 Posted by Retrokaiser at 9:57 PM