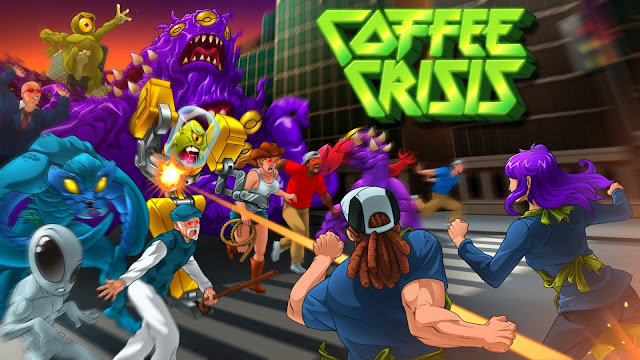 You know what's awesome? Metal, coffee, aliens, and retro video games.  So, lull and behold, a game that takes all of these elements and rolls them into one neo-retro beat 'em up called Coffee Crisis.  The name itself already makes the game sound awesome.  Will Coffee Crisis step up and be a great game, or will it just be another phoned in failed attempt at reviving the genre? (*COUGH* Double Dragon IV *COUGH*) (Click on "Read More" to read the full review.) 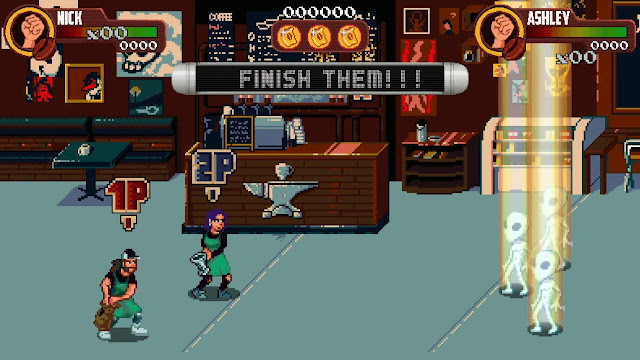 The story in this game is quite silly, then again, this is a game called COFFEE CRISIS, so silliness is to be expected.  Aliens are taking over the World and they want to abduct all of the Metal Bands and Retro Gaming Youtubers.  (looks like I'm getting probed tonight.)  The only hope we have of stopping this alien threat is with two barristers, Nick and Ashley.  They plan on saving the Earth the only way they can...  With good old fashion violence.  It wouldn't be a beat 'em up if we weren't beating 'em up.

Story in this game feels like a B-grade sci-fi film and it's a very appropriate theme to have for a beat 'em up.  Sadly, that's all that's good about the story. This game does try to be funny and what I mean by that is that it tried way too hard.  It's not funny.  It's incredibly cringy and not in the good way.  It also becomes much worse the deeper the game progresses.  It just feels like an outdated meme, or a really bad episode of Todd and the Book of Pure Evil. (fun show, check it out.) 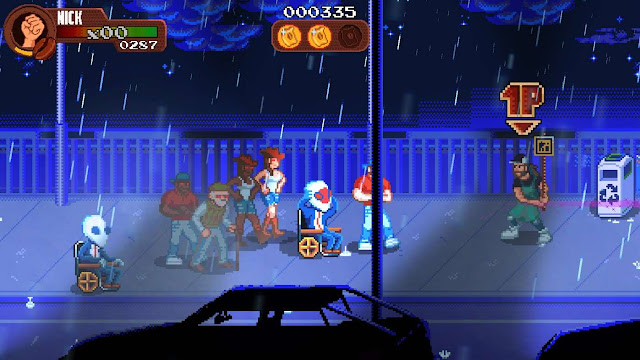 The gameplay is much better than the story.  Heck!  The gameplay tells a much better story than the cut-scenes ever did.  What Coffee Crisis aimed for was an old school experience, taking the players back to the days of when Beat 'em Ups were all over arcades and 16-bit consoles.  Does this game accomplish that goal?  Kinda.  I wouldn't say that it plays exactly like an old school brawler.  I'd say this game plays like a beat 'em up that uses something from all ages of this genre, making for quite an interesting brew. (Aw! I can't believe I just made that pun.)

Does this game accomplish in being a good beat 'em up?  I wouldn't say that the gameplay was bad, but it isn't great.  The combat system is a bit on the rough side but it did feel very satisfying once I got a good combo going.  It felt like I was playing a rougher version of Dynamite Dux but with special attacks that are reminiscent of games such as Final Fight and Streets of Rage 2.  There are a lot of power-ups including the standard stuff such as health, lives, and power boosts.  What I did like was that they did something a bit different with the power-ups and added some that acted more like curses.  These cursed power-ups will alter the screen in different ways, making it hard to kick some mugs. (Ech! Another bad coffee related pun.)

The challenge in this game is pretty tough.  You won't be beat this game right away but it is fair enough to where you'll be getting better with each run.  A big problem that this game has is that it likes to go for quantity over quality on some stages.  Some stages will be long for the sake of being long, having a ton of baddies for the sake of having a ton of baddies, and some of filler levels for the sake of having a lot of levels.  Don't get me wrong, this game does have some very fun levels but there are a few that I would've trimmed out of the game.  You can use passwords to jump to the levels that you really like, or even input passwords to unlock cheats. (Now that's old school.)  There is a two player mode for if you want to suffer (though the challenge, not the story) with a friend.

There are some cameos from bands such as Nile and Psychostick and the Youtube gaming personalities Metal Jesus Rocks and Alpha Omega Sin.  I'm not going to lie, it was very weird seeing cameos from all of them, you're either going to love them or hate them.  It was a genius move making Metal Jesus Rocks and Alpha Omega Sin bosses in this game.  Fans can enjoy the fan service, while non-fans can kick the instant coffee out of them and get some good stress relief out of it. 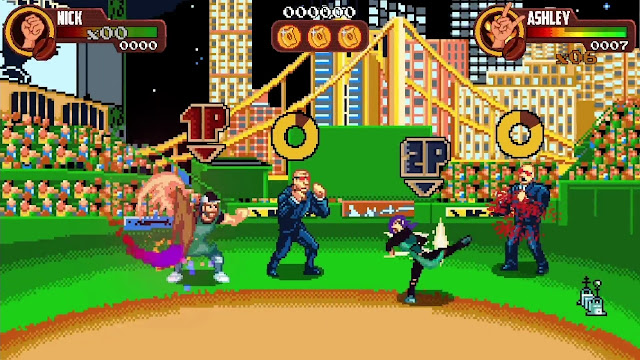 I'm a bit mixed on the graphics.  I do like how they are pixely and in 2D but half of the character designs are just trying way too hard to be funny.  Don't worry though, they aren't as try hardy as the story in this game, or Serious Sam 2. (Yeah, I don't like Serious Sam 2.)  I did chuckle a little bit at the rest of the designs.  There are some character designs that were really good and I had fun looking at them.  The levels also have really cool designs to them and are actually quite memorable. 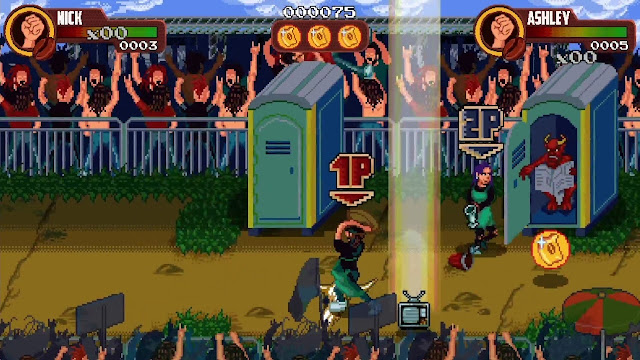 The soundtrack is very headbang worthy with it's heavy metal riffs and beefy sound effects.  The sound gives the game some oomph, giving your attacks some weight towards them.  The soundtrack also goes with the game very well and creates an appropriate atmosphere. 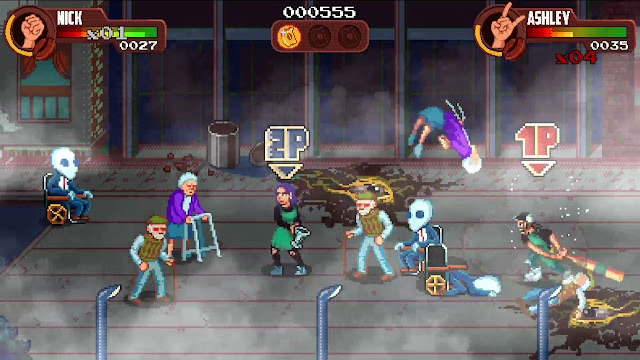 Overall,  despite having a terrible story and having too much filler, Coffee Crisis isn't a terrible game.  I'm giving Coffee Crisis a 6.1 out of 10.  This just barely makes this an okay game.  Play it when it is on sale for cheap. 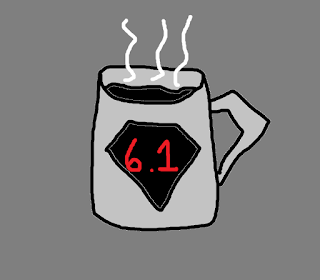