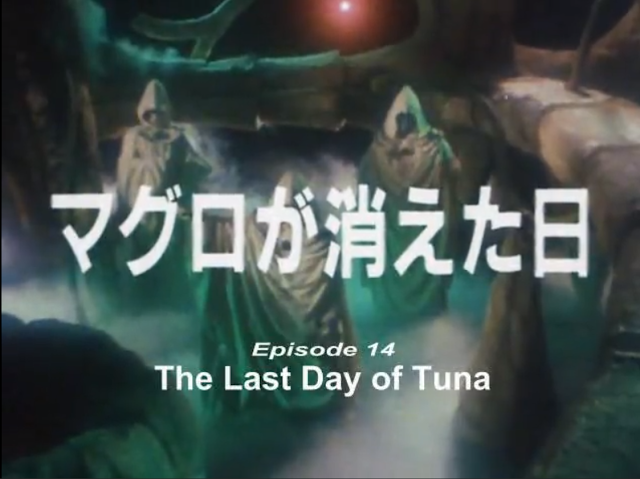 Today's episode has a name that sounds like a bad Dreamworks movie.  Will it be awesome or will it be a dead fish? Find out in this edition of Kaiser Sensei's Summary and Review of Kamen Rider Black.  (Click on "Read More" to read the full article.) 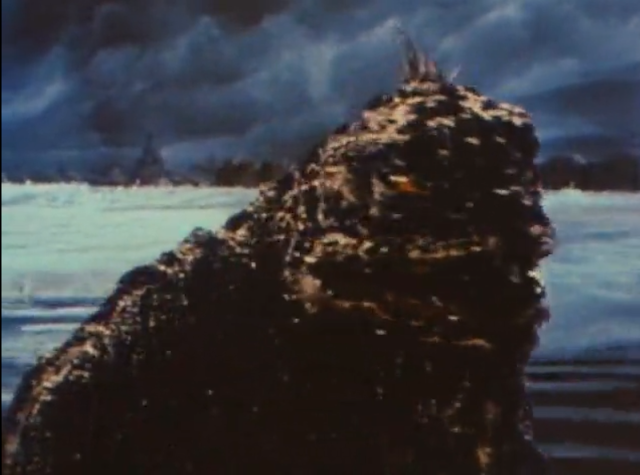 This episode opens up with some creepy shots of the Golgum's lair, where you see evil frogs, deadly lizards, and a really damn creepy looking demon octopus.  It's very nice seeing extended shots of the Golgum's lair.  Next we have a quick recap of the previous episode, where the Golgum are not happy that Kamen Rider was able to defeat Crab Man.  Actually, they are a bit more than unhappy, they are desperate.  Their plan in this episode is to send their strongest monster out to kill Kamen Rider, and their monster of the week is. *drum rolls*  A giant Woolly Mammoth Man!  He is big, he is strong, and he has the bad case of the flu because he fires a freeze beam out of his trunk and he fully intends on using is against Kamen Rider.

Kotaro is riding around and notices that there are icicles at a junk yard.  What makes this odd is that it is a bright and sunny day, so he goes off to investigate and gets ambushed by Evil Snuffleupagus.  I do like how you can see one of the actors bare hands though the Mammoth Suit.  It's HENSHIN TIME, BABY! Kotaro morphs into Kamen Rider.  Kamen Rider does pretty well, Mammoth Man can't sneeze him into being frozen.  Is Mammoth Man shaking from getting some of his ice trunk spray on himself?  Nope! Mammoth Man is scared of Kamen Rider and flees from battle. 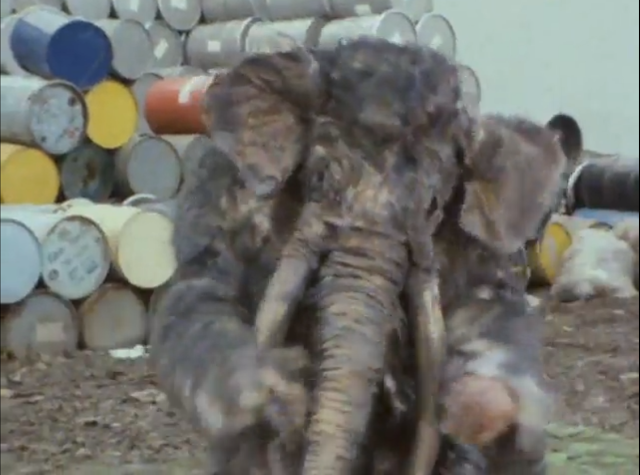 Going back to the Golgum's lair and they are not happy.  Their strongest monster has been easily defeated.  The Golgum aren't down for the count yet because one of their members has come up with a new substance that will enhance the power of Mammoth Man.  Sadly, the formula isn't complete, they need to find the key ingredient to make it work and that ingredient is tuna... Tuna?

Kotaro returns to home base, then he is visited by the owner of the local fish shop and his son.  The local fish shop owner is a bit upset because some guy bought all of the tuna, now he can't make tuna sushi (Fun Fact: The Rice is the main ingredient of sushi, not fish!).  Now we cut back to the Golgum's lair, where they are giving their fish juice to Mammoth Man and it was a success!  The Golgum now want even more tuna, so they can make more fish steroids for the rest of their monsters. 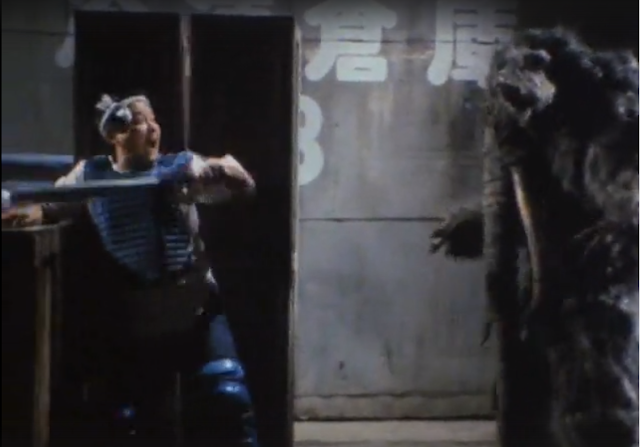 Mammoth Man is out on the town and is raiding the local fish market, looting all of the tuna. (I said "looting", not "rooting", you sick little peanuts!)  It's the next day and all of the people are angry, there is no tuna for sale, so one of the them (the local fish shop owner from earlier in the episode to be exact) decides to go all vigilante and wait for the thief to show up.  May God have mercy on his soul when he sees who the thief is.  Anyway, the guy waits until the night and then he spots Mammoth Man stealing the tuna.  The guy charges at him with a baseball bat but he just gets beaten up by Mammoth Man.  Poor Batman, he couldn't stop Mammoth Man from Robin all of the tuna *Wahh wahh wahh waahahahahh*.

It's the next day and Kotaro is visiting the local fish shop owner at the hospital.  The fish shop owner tells him about what went down during the great tuna robbery of '87.  Kotaro's family take care of his son while he is recovering.  Kotaro immediately knows who is robbing the fish markets, because he had already fought Mammoth Man earlier on in the episode.  Kotaro returns back to home base to figure out why the Golgum need tuna.  The son of the fish shop owner is feeling a bit down because today is the anniversary of his mother's death.  The fish shop owner's son wants to go down to the sea to mourn.  Kotaro and family agree to this, so they head out to the sea. 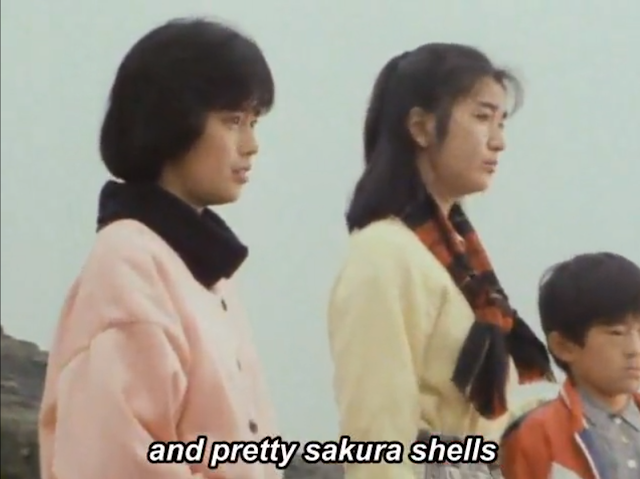 The son of the fish salesman (that sounds like an insult) is at the sea and is remembering his mother along side, Kyoko (Kotaro's younger sister) and Katsumi (Kotaro's brother's/Nobuhiko's girlfriend).  What happens next is that the girls start singing and we get a music video that includes flashbacks (again with the flashbacks) to episode two of the show.  This music video goes on for a few minutes making this article so much more easy (but way less more fun) to write.  At the end of the music video we cut to Kotaro whom is still looking for clues for the whereabouts of the stolen tuna.  Kotaro just happens to ride past a few farmers that are complaining about a cave full of rotten tuna.  This gives Kotaro all of the information that he needs to find the Golgum.

Kotaro starts riding to the cave but he runs into the more powerful, the more woolly, Mammoth Man!  You know what this means? Yup, IT'S HENSHIN TIME, BABY! Kotaro morphs into Kamen Rider.  Doesn't take long for Kamen Rider to find out that Mammoth Man isn't as easy as he once was.  A lot of charging and grabbing going on up until Kamen Rider does a good old judo throw and then... We cut to the next scene!  What happens here? Well, we cut to inside of the cave, where we see the most plastic looking tuna of all time!  After that we see Mammoth Man run into the cave and drink more of the tuna juice.  Kamen Rider also runs in, then the two start fighting again but this time all of Mammoth Man's attacks lead to the tuna lab being destroyed. 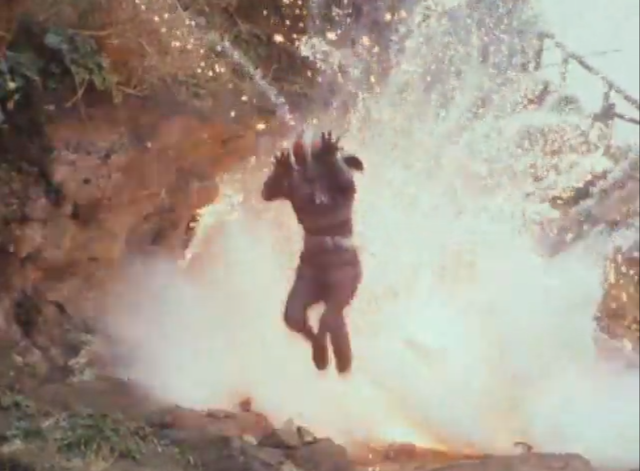 Kamen Rider is now in control of the battle.  Kamen Rider karate chops Mammoth Man's left tusk off and then kicks him off of the mountain, sending Mammoth Man to his grave.  The Golgum are not happy, so they send the member that was in charge of this operation into exile.  Kotaro and gang are happy though and are enjoying a nice lot of tuna sushi.  Victory sure tastes sweet and so is knowing that we've reached the conclusion of another episode of Kamen Rider Black. 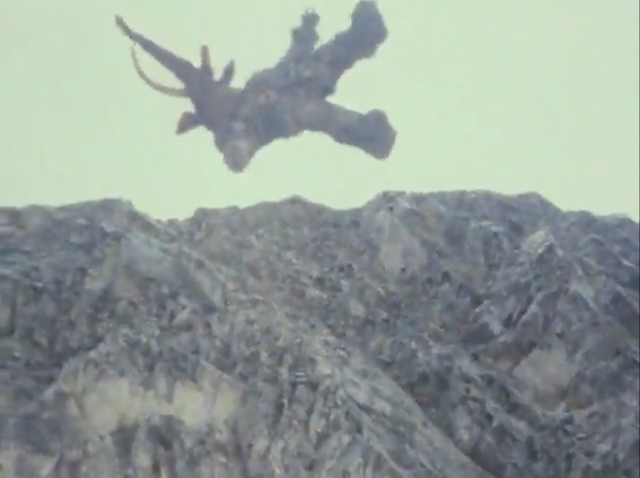 Yeah, it's another episode with a paper thin plot.  I did like the idea of the Golgum stealing tuna, so that they can make their monsters stronger.  This episode needed so much more than that though, as it ended up being an ultra repetitive episode.  Such a shame, Mammoth Man is one of my favorite looking monster so far.  He had an excellent gimmick of being able to spray freezing breath. It's just a shame that they dropped the ball with this character.  I did really like the side characters introduced in this one, especially the fish shop owner because he was full of energy and comedic charm and I hope he makes another appearance.

The action in this episode wasn't fully bad but there were way too many filler battles that ended up dulling the story.  The final battle between Kamen Rider and Mammoth Man was really awesome though. I loved how Mammoth Man got so addicted to steroids, it turned into his downfall, showing that consequences have actions.  The props and effects in this episode are on the funny side. The tuna  looked so plastic that it wasn't convincing.  Mammoth Man falling down the mountain and being replaced with an obvious dummy also made me laugh.

Overall, not a lot to say about this one, nor was there much to see, it was full of filler.  There is some fun to be had, if you are willing to ignore the filler.  I'm giving this episode a 5.9 out of 10. 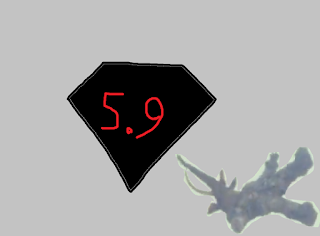