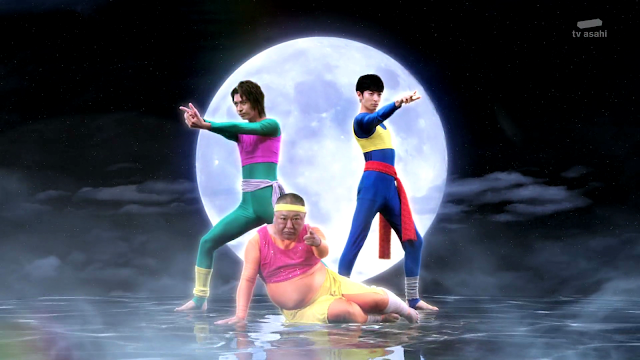 Red Diamond back again with another Sentai episode. This episode promises to be about blue and green, aka Tooma and Sakuya, and will center around dancing. No words can express my expectations for a preview like that so let's click "read more" and get right into it.

This episode opens up right in the middle of a fight between the Lupinrangers and a new Gangler named Pyodor. That's my favorite way to begin an episode.

The rangers are actually having trouble and Pyodor ends up getting bored and leaving. Tooma attempts to give chase but is stopped by some weird mind attack. All the Gangler does is say "don't follow me no matter what" and Tooma freezes in his place. Cut to into! I detect a new collection item that puts spells on people.

One theme song later, Tooma is walking across a bridge when he sees a Sensei eagerly, and very creepily, trying to recruit people for his Dojo. 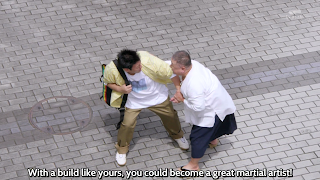 Tooma steps in and breaks up this Sensei's efforts. In response, the Sensei says Tooma should join his Dojo. The same edit that was used on the Gangler to indicate his hypnotic power is used here and Tooma instantly agrees to join the Dojo. Who wants to bet this Sensei is Pyodor in disguise? 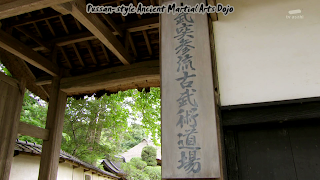 It cuts to the Dojo of Pussan-style where Tooma has a wake up moment and forgets how he got there. Making things even more confusing, when the Sensei comes out and begins introducing his classes, he also introduces his assistant who is none other than the green Patranger, PatranNigo, Sakuya. 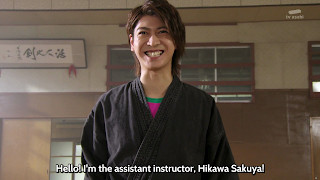 I got to admit, this episode has got me curious.

The other Patrangers assume that Sakuya is doing this in order to improve his skills in battle and are impressed. With the exception of Tsukasa, who finds it suspicious that Sakuya gained this position so fast. What's up with Tsukasa? She is suspicious of strange events during the time of the Gangler invasion? You'd think she were a cop or something. Believe it or not, things get even stranger when Sakuya's martial arts lesson turns into aerobics. I can't do it justice with words but watching this aerobic workout session was a trip.

Tooma knows this isn't right and still doesn't understand why he is there but he can't control going along with it anyway. Kairi and Umika don't understand what is going on but dismiss it as a stress reliever. Basically, non of the other rangers, except maybe Tsukasa, are taking this situation as suspicious activity.

Back at the Bistro, Tooma attempts to make Sakuya see the sketchy factor of this whole situation as well as get some information out of him. However, all he learns is the Sakuya was only there for 3 weeks and had already become and assistant teacher. What follows is a series of scenes and events where Sakuya slowly pushes Tooma to his irritation limit. Starting with Sakuya insisting that Tooma call him "sempai" and constantly starts hanging him and asking silly questions.

Once irritation levels are at a max, Tooma attempts to quit but the Sensei says he cannot, using another spell on Tooma. Are we seriously not supposed to pick up on what is going on? A few scenes later, the Sensei orders Sakuya to deliver a case of bombs disguised as sweets to the Global Police after receiving a mysterious phone call. Will somebody just say it already? 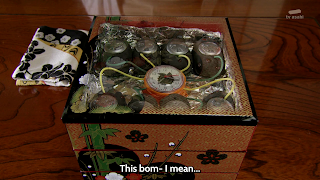 Shockingly, Sakuya does get suspicious of the box and almost peeks inside which forces the Sensei to use his hypnotic spell on him. Tooma sees this event unfold and comes to the conclusion that the Sensei is the Gangler in disguise. Finally! I mean, no really?

Tooma steals the bomb from Sakuya and uses it to blow up the Dojo. (Although he did consider just letting him get blown up.) This forces Pyodor out of hiding where he is confronted by the Patrangers thanks to a tip from Noël Takao. Now, a fight begins.

The Patrangers struggle against Pyodor and are actually on the verge of defeat. From the sidelines, the Phantom Thieves learn that this Gangler controls people with his words and come up with a brilliant plan. Tooma throws his sword into Pyodor's mouth so he cannot talk and then jumps and steals his Lupin Collection. I was dreading the day these quick/cop out victories would return.

Without his treasure, Pyodor is a sitting duck to the Lupinrangers attacks and especially Tooma's rage for embarrassing him. They overwhelm Pyodor with attacks and easily destroy him. It was never stated but one can assume that the collection piece gave him the voice control powers. Making it kind of a mystery as to why Pyodor lost his ability to dodge attacks, or even fight back.

As usual, this is where the monster grows big. However, Tooma tells Goodstriker to go to the Patrangers so that Sakuya can also get even. Once formed, Sakuya has Patakaiser do the aerobics he learned instead of actually fighting, which only results in them getting attacked forcing X emperor to join in the fight. Sakuya finally discovers his rage/desires for revenge; not because of the embarasing dance, but because he learns that the expensive monthly fee was a big waste. Dang, this episode will not stop throwing curve balls. 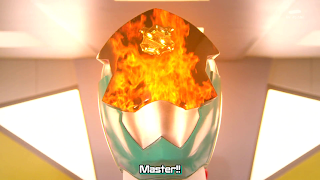 Sakuya uses the bike/crane fishing hook combo and finishes off  Pyodor with a lot of drive and several flames in the background. Afterwards, he just cries with Keiichiro and Tsukasa trying to cheer him up.

The episode ends with Kairi and Umika making fun of Tooma for the aerobic dance he was forced to do. That basically sums up the tone of this episode. 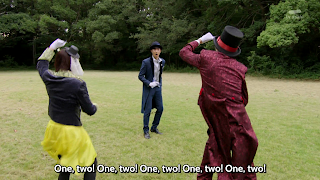 This episode was hilarious and a lot of fun to watch. It would have been so easy for this plot line to turn into another awkward and terrible episode, but somehow they pulled it off. I can tell, the writers knew this was a silly concept and just went all out with the goofy factor and had some fun. Granted, as far a lore or story goes, it doesn't hold any significance. Other than Goche making Pyodor grow, the main villains don't show up at all. No real character development was done either. Despite that, I would still highly recommend giving this one a watch simply because you will never see anything else like it. 4/5
Posted by Cendoo at 4:31 AM