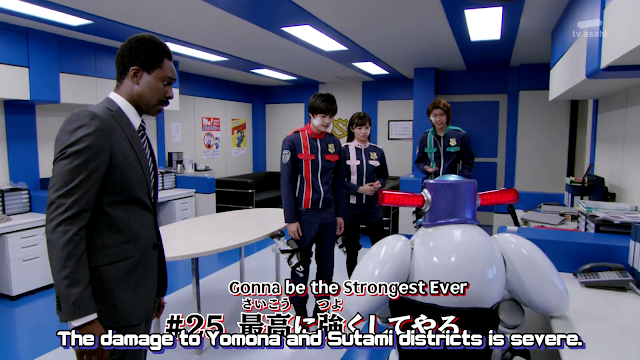 It's Raimon's last stand. Last episode ended with him turning in to an extra large giant and instantly defeating Patkaiser and the X Emperor. The preview from episode 24 showed that the two teams may be forced to work together in order to overpower Raimon. What will become of this turn of events? Click "read more" to find out.

Starting this episode off, Dogranio is shown looking very amused by Raimon's break out in rage and he talks with Destra and Goche about how strong Raimon can become when he is serious. Cut to intro! Seems like they don't want to waste anytime for this episode.

The Patrangers return to their HQ after their defeat while Noël Takao wakes up in Kairi's room with the worst injures; while talking, Kairi proclaims they only use one another and do not trust each other. Random thing to throw in, must hold significance later in the episode.

Meanwhile, Raimon once again tries to form an alliance with Zamigo, but he refuses claiming Raimon only wants to use him since his collection piece does not affect him. This claim infuriates Raimon causing him to attack Zamigo which triggers Jim's alarm and alerts their location to the patrangers. That is barely 6 minutes in. Something is building up. At the same time, Kogure informs the Lupinrangers about Raimons location and both teams take off. 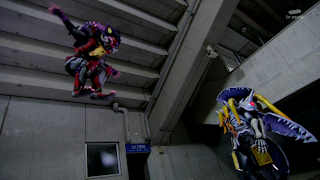 Patrangers arrive at the battle first which Zamigo uses as a distraction to leave. Raimon and the Patrangers face off and it goes pretty one sided in favor of the Gangler. On top of his strength, any damage Raimon takes is instantly regenerated due to his collection piece which renders all the Patrangers attacks useless. (Reminder, they still can't open gold safes like Raimon has.) Things are looking grim for the Patrangers, when Raimon gets shot from off screen by Noël Takao. 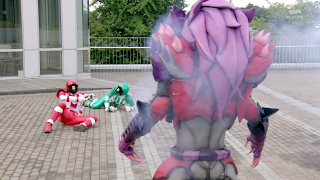 Trivia time, this is actually a big cliche in Sentai. A few rangers are down when the monster gets shot at by another ranger who is walking slowly towards them while pointing their gun. Several seasons have done multiple times within their run. Only difference this time is that the monster does not take any damage from the shots.

Noël Takao is still injured from the blast his mech took but henshins into Lupin X regardless and takes another attempt at stealing Raimon's collection piece. Unfortunatly, Noël Takao is still unable to open the gold safe and gets beaten badly which knocks him unmorphed. That is the first time his silver form took any damage.

Lupinrangers finally arrive and see Noël Takao in rough shape. However, turns out he was able to figure out the gold safes. Noël Takao's attempt at opening Raimon's safe actually scanned it revealing it has a 6 digit combination instead of 3 so two VS vehicles need to be used at the same time.

I don't know much about safe cracking but I am pretty sure something is off about that logic. Would the two devices just know to work off each other?

When pressed by Kairi, Noël Takao reveals that he is fighting for the same reason as the 3 Lupinrangers, in order to revive someone. Now, since Noël Takao revealed he is willing to put his life on the line, Kairi finally decides to trust him. 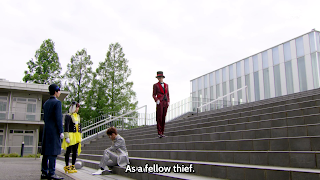 This is a nice moment and all but it is not the story that was promoted in the preview from last episode. Serves me right for falling for that hype train I suppose. It is kind of funny in a morbid way how the 4 of them just ignore how the Patrangers are getting beat to death.

The off screen shooting cliche is done again by the Lupinrangers who have a plan; Kairi will act as bait while Tooma and Umika steal the collection piece. Unfortunatly, Raimon sees through this strategy and manages to protect his safe while knocking out Tooma and Umika with his missiles leaving Kairi alone to fight. I seriously thought this was going to be another swoop in/instant win for the Lupinrangers. I am pleasantly surprised.

Kairi struggles to fight Raimon alone and does not seem to have anyway of beating him. It is at this time that the Patrangers decide to back him up with a big push from Tsukasa after she quotes one of their mottoes, "use any means necessary." Keiichiro hesitates the most, but gives in. However, even the 4 of them aren't enough and it isn't until Tooma and Umika re-join the fight that the 5 of them are able to hold Raimon down. Bravo.

Raimon still isn't done. Just as Kairi is about to get the safe, Raimon grows 2 more arms to push him away. Seriously? This is quickly resolved as Keiichiro grabs the new arms and Noël Takao jumps in the fight and opens the safe with Kairi. I am actually a little happy that the extra ranger didn't get left out.

Raimon turns himself giant after losing his collection piece and the two red rangers fight over who gets to battle him. Goodstriker breaks this by saying he will combine all 7 of the ranger's VS Vehicles given they will probably need the power for this opponent. With that, a new formation is revealed, Good Feeling Kaiser VSX. 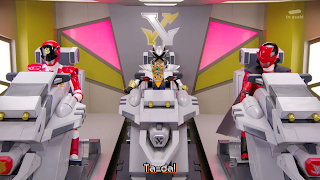 Normally, this is where one would ask "why didn't they ever do that before?" However, it makes sense in this context since the two teams would not have collaborated unless they desperately needed too.

The two reds get into a fight again, so Goodstriker switches out Keiichiro with Tsukasa by dropping him through the floor. I'll admit, that was funny. More importantly, they finally have the power to match Raimon. This giant battle goes back and forth with some good action showing off everyone's part, but distracting transitions to CG. It all ends will a new over the top finisher. 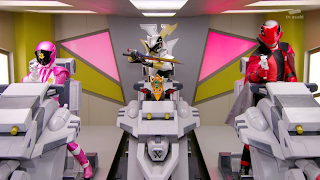 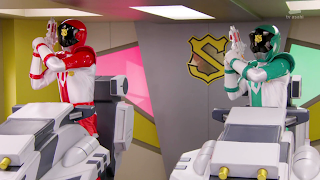 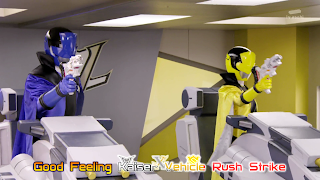 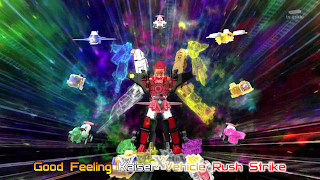 There is no long shot of all 7 rangers but they are all in the cockpit, just wanted to show that.

Raimon goes down with a big purple explosion and both teams earn their biggest win yet. Even Dogranio is concerned by their growing power.

The episode ends on a lighthearted note, Noël Takao get's thrown out of Kairi's room and is taught the phantom thieves rule that they do not help each other anymore than needed.

This episode felt like two plots in one when it was already meant to be a follow up to the last episode. It is an odd mixed feeling to have; on one hand, the Noël Takao story about bonding with the Lupinrangers is valid and was necessary, it just didn't feel right to be in this episode. Primarily, this was supposed to be a plot about overcoming one of the more powerful Ganglers, which is was and done pretty well. I just do not understand why the focused could not have been on the Gangler. Oddly, it feels like the two stories were done in order to keep the focus on the Lupinrangers given how little screen time the Patrangers got outside the final battles.

Personally, I would have liked to see both teams going through the motions about losing a battle and worried about how they will overcome this challenge then saving this Noël Takao plot for the next episode. I really don't buy that the Patrangers would have just casually walked away from a defeat like that. On the other hand, I suspect that the writers fear that an episode with both teams having a story arc would be difficult to follow for the younger views.  Regardless of personal preferences, I have to admit that even with this odd placement of two loosely related plots, both story lines were handled well. As a whole, this episode had good character development, new arsenal introduced, and the fight scenes gave every ranger a moment to shine even if the story focused on the Lupinrangers. 4/5
Posted by Cendoo at 6:00 AM