Well, this is an interesting little title. Based on an obscure board game called Surf Trip and given very little development time, what can one expect from this title? Click "read more" and let's find out.

The story revolves around a surfer dude named Greendog and a cursed amulet. After a wipe out from a big wave, Greendog finds himself with an amulet that he cannot take off. 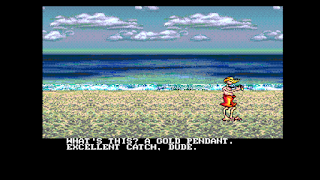 Fortunately, Greendog's girlfriend Bambi is close by and conveniently knows everything about this cursed pendant. This amulet cannot be removed until all of the 6 Aztec treasures are collected and while wearing it, Greendog cannot surf and will cause all living creatures to go berserk-o. (Except her I guess.) The good news is that the amulet will guide him to the treasures. 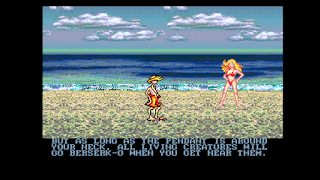 A lot of games use random animals as enemies, but this is one of the few times I've seen an explanation for that.

The game plays like any typical 2D platformer of the early 90s. C button jumps, B attacks with a Frisbee, and A uses any picked up items which the game refers to as the "panic button". Various animals and some humans are the enemies. 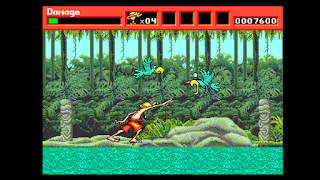 Greendog walks at a slow pace and the platforming is nothing original. Jumping on rocks and logs to cross water, bottomless pits, and the occasional vine swinging. Enemies are also limited in variety and many stages just have re-colors of previous stage enemies. Controls are nice and responsive and the game is forgiving enough with the health bar and lives/continues.

However, the biggest problem with this game would be traps that send you back in a stage, or troll traps as I like to call them.


Auto scroll level with hidden springs that send you far back in the level.

In addition to these troll traps, the difficulty spikes really fast due to the short length.

There are only 6 stages and while they all have at least 2 areas each, the whole game can be completed within roughly an hour.

Power up items are simple to understand and all last a short time. A clock that stops time, an umbrella hat that makes you invincible, and another Frisbee that automatically attacks enemies. They are found randomly alongside every other item. 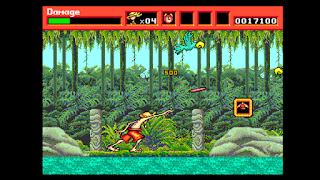 Unfortunately, these power up items are very scares and cannot be cycled through due to this being a game before the 6 button controller.

Besides power ups, junk food including burgers, pizza, fries, hotdogs, and soda cans can be collected by attacking enemies and objects. 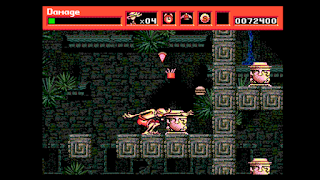 Soda cans restore health, all the other food items only give points. Yup, this is a high score styled game with no saves or passwords that is meant to be completed in one sitting.

In-between the main stages, you play a peddle copter stage that breaks things up a little bit. You fly up by mashing the jump button and have a chance to rack up even more points. 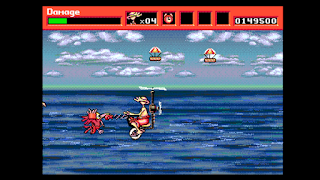 These segments are not very long and can be frustrating. However, they are manageable and for the most part do not hinder your progress.

As a whole, game play has some problems and reeks short development time, but it is honestly not bad. Controls are solid, you can throw the Frisbee in multiple directions so enemies never get cheap shots, and even on the non linear stages it is never hard to navigate. Not a classic, but there is fun to be found here.

If there is one thing this game earned a lot of praise for, it is its soundtrack. The game uses Calypso music which fits perfectly with the Aztec theme. Sound effects sound like any other typical Genesis game. Not high quality, sometimes compared to farts, but good enough to fit what they represent and nothing outright bad. As a whole, audio is good.

There is a lot of animation from Greendog and the levels have plenty of details. Greendog himself looks, goofy, and stands out from the rest of the worlds art style. 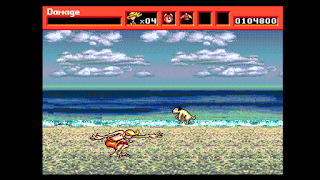 I can't knock Greendogs design too much since it had to match the source material. But, I still wish the environment matched a little bit.

Really, I was happy with graphics, until I saw some questionable design choices.

This one makes me uncomfortable.

I'm unsure about this one.

May or may not be my place to say but I have always had low tolerance for things of the racist or prejudice and that is not stopping now.

Overall, Greendog: The Beached Surfer Dude! is an inexpensive game that is worth a look. There are a good number of flaws and some questionable enemy designs, but gameplay and story are solid enough to find some enjoyment with this title. Given the background revealed by the lead developer as a comment on this video, I am actually quite impressed.

With a background like that, this game could have been a lot worse. It is what it is, you can find this title from $5 to $10 and for that price you get your monies worth. Just an okay game. Again, not a long game, but it is difficult enough that it could take more than 1 attempt to beat it.