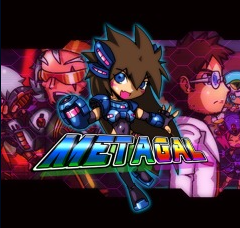 Yup, it's my third gaming review in a row about a game published by Ratalaika Games.  One of their games was okay and the other is a hidden gem.  (Don't sue me, Metal Jesus Rocks.)  Either way, this company is keeping the Vita alive.  While I thank them for that, they aren't free from having their releases criticized…  I mean, honestly reviewed.  (Criticized sounds like I'm about to unfairly bash the games head in.)  Today's game sounds like a really good one.  This is Metagal for the PS4 and Vita.  Yes, I can already spoil that this game has two easy to get platinum trophies.  (Click on "Read More" to read the full review.) 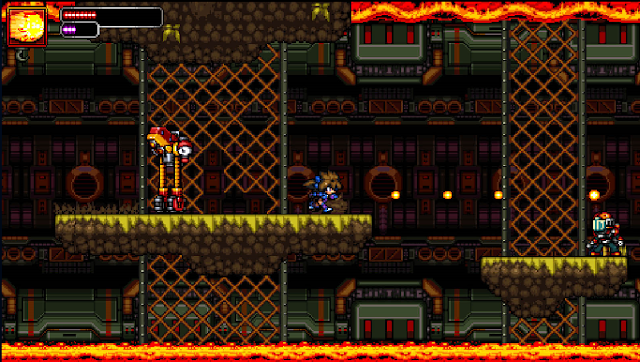 The story in Metagal is about an evil general named Creeper, stealing Dr. Ray's robot daughters, so he can rule the world with them.  The doctor and his robot daughters refuse to give in to Creeper's demands.  Creeper gets his own way with the help of Gal.0X, who was one of Dr. Ray's robot daughters that was captured and converted by Creeper.  Dr. Ray is devastated but he has an ace up his sleeve.  He has another robot daughter that Creeper has no idea about, named Meta.  With the help of Meta's new sexy and scientific nano-skin outfit (their words, not mine), Meta has the power to rescue her sisters from Creeper. 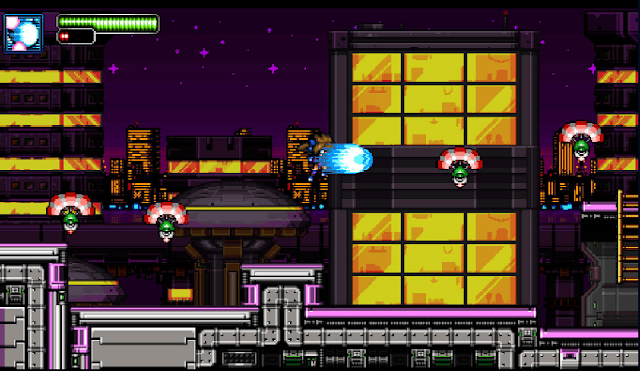 I'm not going to beat around the bush here.  This is 100% a clone of Mega Man.  You go around beating tough themed levels that are full of enemies.  You get to the end of the stages and fight a powerful boss, then you absorb their powers once you have defeated them.  You'll eventually reach the bosses castle which consists of three stages including a stage that makes use of all of your powers, a stage that has tough castle guards, and a stage that's a boss rush that ends with you facing the ultra tough final boss.  Yes, it's Mega Man but with a mostly female cast and you know what?  This isn't a bad thing at all.

What I liked about this game was that it takes every thing good about Mega Man and then they improve on it by adding in elements that you wished that were in Mega Man.  The special moves that you unlock are very awesome.  You have land mines that not only destroy things but you can also bounce on them.  There's a laser that automatically aims for the enemies.  There's an awesome warp ball that will make you trade places with the enemy.  Lastly, there's a move that puts your body in a flame and it's not just good for destroying bad guys, it'll help you get across long gaps.

There's not many special moves to gain in this game but they are oh so satisfying to use.  Unlike Mega Man, you don't need to collect items to replenish the special weapons energy bar.  The special weapons recharge by themselves and you'll only have to wait for a short amount of time before you can fire your special weapons again.  This is a feature that I wish were in Mega Man.

The game itself is also very short with only eight levels.  The stages are challenging and fun, with a lot of charm to them.  The replay value is also decent, I did like replaying the stages.  Replaying stages while having weapons unlocked, will encourage you to beat the stages in record time.  Plus, there are secrets to be found in this game and you can only find them by having certain weapons.

All of the levels have checkpoints but this game improves on that by adding in the golden gear system.  What is the golden gear system?  Why, it's an item that you can collect that can be used to respawn Meta at the start of tricky areas that you've died on that have no checkpoints.  They can also be used to heal up Meta during the stages, just like the E tanks from the Mega Man games.  It's a really useful system but use these items wisely, otherwise you'll be all out. 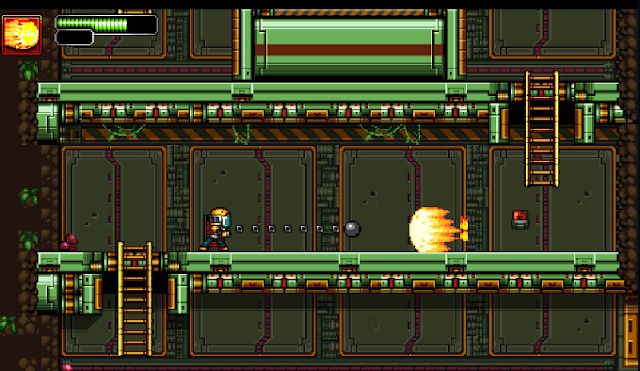 The graphics rock an awesome 2D style that looks like something you'd find on the Super Nintendo (late-era) or the Sega Saturn.  Animation is pretty decent and smooth.  Levels and characters are fully inspired by the Mega Man games (as you'd expect) but the dev does throw in their own style into the mix.  I really liked the designs, a lot of love was put into them.  The still art that pops up during some cut-scenes looks a little awkward.  They look more like fan art that you'd find on DeviantArt more so than official art. 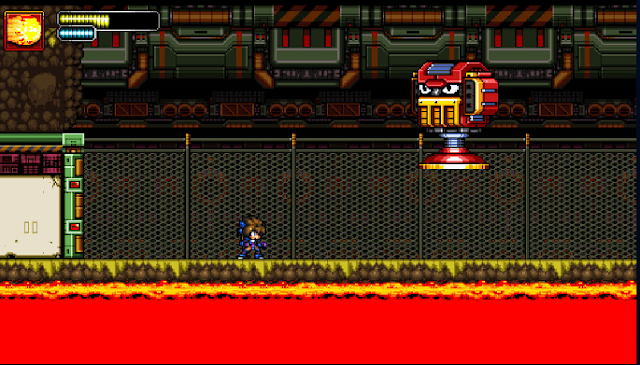 The soundtrack has a nice hard rock sound that fits the game like a glove.  It added to the fun and atmosphere and the sound effects are also very good.  I recommend playing this game with a neat set of headphones on. 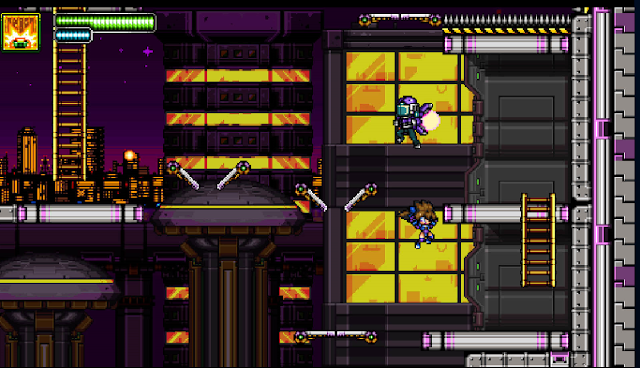 Overall, Metalgal is a nice loving tribute to Mega Man but with a few neat twists thrown in.  It's a very short game but a real fun one and it is very much worth your time.  Heck, Metagal is better than some of the main Mega Man games.  Metalgal gets a very respectable 7.5 out of 10. 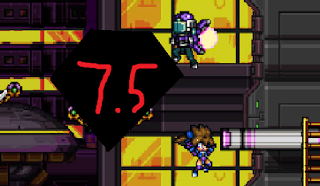