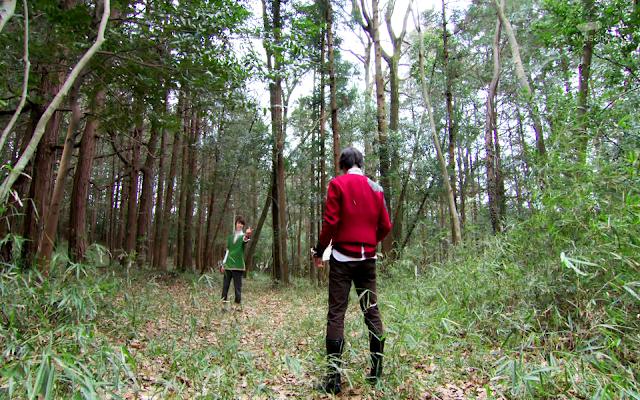 Back again, time for some more Super Sentai. Last episode lead us to believe this episode will revolve around Green and Black searching for their zord equivalents known as Kishiryu. Also, there may be some beef between the two of them and the other 3 Kyusougers over Green and Black trying to kill their friend. What will happen? Click "read more" and let's find out.

The episode begins with Koh following Towa and Bamba in an attempt to befriend and recruit them. Towa and Bamba still see the other 3 Ryusoulgers as "dead weight" and aren't interested, until Koh reveals a map to the temple that may contain their two Kishiryu beasts. Rather than attempt any kind of deal, Towa attacks Koh in an attempt to steal the map. Koh has a bigger heart than I do if he can forgive all their behavior. Towa challenges Koh to a duel for the map saying him and Bamba will be their comrades if Koh wins. Could this be the return of Red vs Green? Cut to intro.

All I'm going to say is, I hope Koh obliterates Towa.

One theme song later, and the duel is about to begin.

The two of them are ready in the wind, they dash towards each other with swords out and, we get trolled. 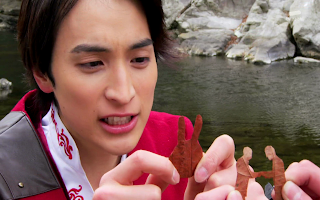 Koh doesn't think comrades should cross swords, so he has come up with other way to duel including carving leaves and rock-paper-scissors.

Cutting away, we now get to see the monster of the week for this episode. 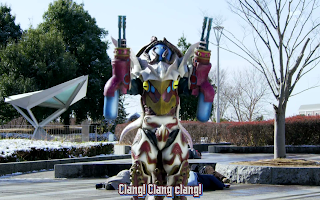 This duel gun wielding blue Minusaur appears without explanation and is shooting up civilians with blue liquid. Melto and Asuna appear to fight and call on Koh for help. Towa overhears this call and decides they will settle things by seeing who can defeat the Minusaur the fastest. Greens concern for the people is just overwhelming.

The five Ryusoulgers are all present, morphed, and ready to fight. Towa and Koh get into more competitions while the other 3 watch them in confusion. This battle goes all over the place, but the Green and Red competition ultimately leads to the Minusaur escaping. All the people who were shot by the Minusaur are stuck in a deep sleep. Bamba and Towa go looking for the human that the Minusaur was born from. Looking for the easy way out again.

Cutting to a hospital, we meet an ill child named Yuuta with a concerned father at bedside. It is implied this kid is who the Minusaur was born from. 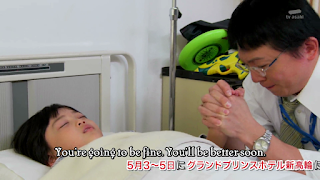 Seems the Black and Green brother aren't completely heartless as even they hesitate to try and kill the kid. Instead, the 5 of them split up and go to the two locations on the map in search for the green and black Kishiryuus. Asuna and Bamba find an empty lot and Towa, Koh, and Melto find a temple stuck under an unmovable mountain.

That search for the last two Kishiryu is interrupted by the Minusaur which has now had time to develop and is fully grown. They should really put more effort into preventing that. Now, the monster is trying to make a plane pilot fall asleep to cause a crash, so the stakes are high. That's pretty evil, although I don't see what the villains gain from it. Regardless of plot holes, the stage is set, the mechs are summoned and the giant battle begins.

To be fair, that was the first real concern for collateral damage I've seen a Sentai team show for quite some time. Has anyone seen Ui by the way?

Things are not going well for the Ryusoulgers, the Minusaur has them kept at a distance by continually shooting and they can't close any ground. Clearly this struggle is just setting up for a new mech combination, but you got to appreciate a monster using genuine fighting strategy. 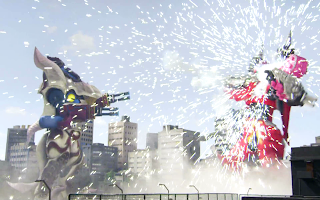 Throughout the entire episode the Minusaur kept saying "Kochi Kochi" (which until now was translated as Clang Clang) and now Bamba has figured out the meaning behind it. Turns out, it was a gesture to come play because the Minusaur was actually born from the sick kids Dad who was too busy working to play with his son. Looks like every episode is going to reveal someones inner demon. I guess that makes this the perfect season for this website.

Bamba is about to kill the Dad when Towa stops him and gets an idea; he wants Koh to revive his Kishiryu by playing with the Minusaur. What? Yes, the Minusaur has a child like instinct so it goes along and is lured to the temple from before. 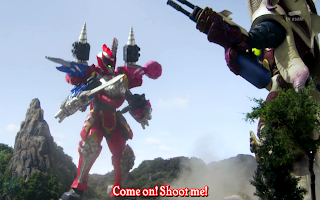 Okay, now I get it, but I don't see how Koh managed to figure that plan out.

The Minusaurs shots are easily able to destroy the mountain and free the green Kishiryu. (Even though the shots didn't seem any stronger than the attacks the Kyusoulgers were using.) Now, a new mech is her, Tigerlance! 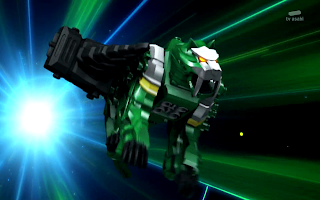 Tigerlance appears to specialize in speed just like Ryusoul Green. So, is it a tiger or a cheetah?

Towa then has Tigerlance combine with the others and our new combination is shown. Since when did he become cooperative?

This new form has enhanced speed and is able to one shot the Minusaur during its reload time earning the Ryusoulgers another win. Enjoy your moment Towa, this form has maybe a few more episodes before it is overshadowed.

Back at the hospital, Yuuta's Dad makes a full recovery and Bamba gives him some basic advice.

The episode ends by revealing Bamba had found his Kishiryuu at some point. Towa shows up and says the others have influenced him which is why he stopped Bamba from killing the father and then we get a pointless dinner scene back at Ui's house. The end!

This episode was solid and necessary. The point of it was to develop Towa and introduce his Kishiryu Tigerlance. Other than that, there was nothing overly special about this episode. It was stated at the end that Towa is starting to see things the way that Koh, Melto, and Asuna do about trying to save every life and working together, but I still don't think his character is redeemed just yet. However, it is still early in the season so anything can happen. As a whole, this was a good and well paced episode so, no harm done. 4/5
Posted by Cendoo at 12:00 AM