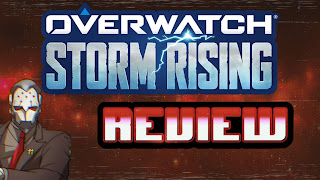 The new Overwatch Archives event is upon us and I have one question for you... Is it worth your time? I'll try to give my thoughts. Click "Read More" if you're interested. 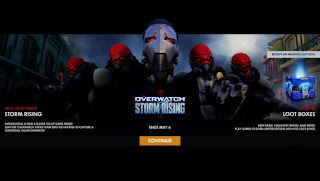 It's that time of year again, yet another Archives event has come upon us. Retribution was wonderful last year, something I literally played non-stop to get all the achievements on... I didn't, that expert run with no incapacitations is a real bitch, I gotta say. But while Retribution felt like a fleshed out PVE experience... Well. We'll get to what Storm Rising felt like here in a minute, since I'm going to cover the plot of the event a little. Won't go into too deep spoilers though. It's too short to spoil the whole mission. (People have been completing it in six minutes or less on the All Heroes mission variant, normal difficulty, so take that for what you will.)

Taking place six years before the Recall- Tracer, Winston, Mercy, and Genji are tasked with tracking down Maximilien, an ominc council member of Talon, who possibly has information on the location of Doomfist. That's literally all I can say because any more information would probably spoil the events of the mission. This is Maximilien's first in-game appearance, previously only seen in the teaser comic Doomfist: Masquerade all the way back in 2017. Long time in the making for his appearance, it seems.

But what are my thoughts about this event, you're probably wondering? Welp, it's lackluster but not entirely bad. Great cutscenes at the start and end of the mission, introduces new characters on the horizon, and good banter between the characters during the mission. However, you literally fight against the same enemies from Retribution and then there's a small payload moving segment (not as agonizing as Uprising's payload segment, yikes). While yes, we are tracking and dealing with someone from Talon, I would have liked to have seen new enemy types or maybe extra side objectives to complete.

If I had to rate the event out of the three we've previously had, I'd say this is definitely the weakest out of them due to the lack of substance. Not the worst thing I've ever played (that award goes to Fallout: Brotherhood of Steel), but it's sure as hell not the most fulfilling thing either.
Posted by FenrisTheRogue at 1:00 PM