Red Diamond back again with another indie game. This time around, we got an isometric/twinstick shooter by Shotgun with Glitters called Moss Destruction. With a title like that, it is very difficult to predict what this game will hold so let's click "read more" and dive right into the review.

There is no dialogue or cut scenes. However, this game does have a story found in the games description on the Steam store page. Short story made shorter, the kingdom of Mossorian is falling and the player is the final hope. Doesn't get much more basic than this. 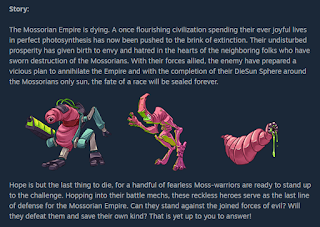 Game play is a straightforward concept; an overhead shooter with the simple goal of finding the exit without dying. There is no time limit, but the stage will eventually turn to night and the enemies will get stronger during this time.beginning  Controls are very simple, mostly just move with WASD and shoot with the mouse and a few keys used to switch items or weapons. (Or twin stick and buttons with a controller.) 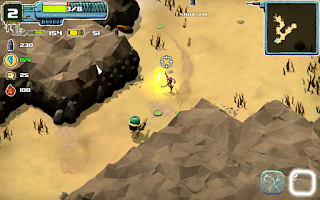 As you progress and defeat enemies, you gradually rank up and find items and new weapons from enemy drops that can also be purchased from a randomly spawning shop portal. 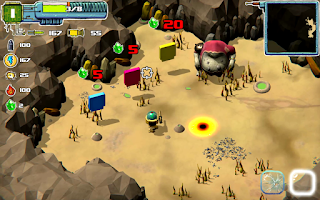 These shops sell equipment that give more permanent upgrades as well as 2 of the 3 playable characters. Anything sold in shops is randomly generated and they use green crystals as currency which are another random drop from enemies. A lot of luck is used in this game, especially with power ups. In-between each level, the player is given a list of upgrades to choose from based on rank and equipment. Other than these in-between, the items found are a gamble as to whether or not they will help or hinder the player. Each item is listed as "unknown" until used, but after usage they show an icon to indicate their effects.


There are 3 worlds total, each one containing at least 6 levels and has a boss battle in between each world. Not counting the Endless Mode, this is a very short game, in theory. However, in what can be assumed is an attempt to pad out the length, this game features a one death game over system and is annoyingly difficult. The only check points are the two worlds once unlocked.

Other than being able to begin at the start of the second or third world, everything (other than things purchased from the in game store) is reset after death including items that were identified. Meaning every run has to go through the same levels and gambles for new found items. Dying almost always feels cheap since you can be harmed by your own weapons if they explode and enemies will frequently corner you or attack from off screen. This is an extremely frustrating mechanic and will instantly turn a lot of gamers off.

The three playable characters have very minimal differences between them. Mosses, (one default character) is the middle ground type with no strengths or weaknesses, Don Grandmoss is the slow but strong type, and Dr. Gizmoss is fast but weaker. Unfortunately, the differences, while noticeable, make little impact on game play. 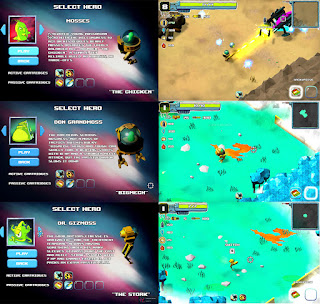 As a whole, game play is not broken, just unfairly difficult and does not do anything innovative or even above avarage.

The music and sound effects are completely forgettable and stock. Nothing sounds out of place or distracting, so not bad audio by any means. This category of audio is the middle ground, not bad or great just, bland.

Visually, this game, while far from groundbreaking, is very appealing to look at. Animations look nice and everything is bright and colorful. Unfortunately, within each world, levels all look the same so there is very little variety. Every stage is designed to be maze like, but also non linear. Basically, each stage are like squares with different twists and turns each way but more than one route can lead to the end with the map updating as you explore. This layout works decently for this type of game and the mini-map does help keep you from getting lost due to the repetitive scenery. 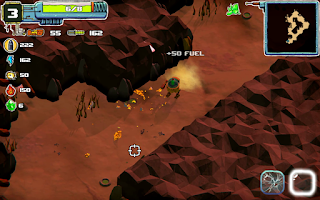 As a whole, Moss Destruction is a game that is very difficult to recommend. At first glance, this seems like a simple but fun little indie title, however the biggest problem is the punishing difficulty and the fact that dying sends you back to the beginning of the world you are in. While there are equipable items that are supposed to save the player from death, they don't create any window of invincibility or help escape a bad situation and pretty much just act as one extra hit which in most cases does not prevent death. This design choice will lead to a lot of rage quitting in what was at best an average game to begin with.