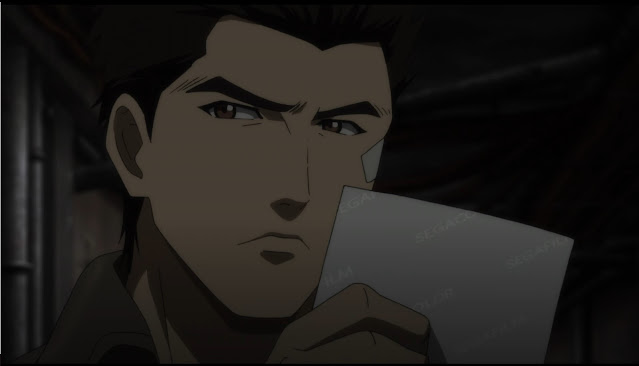 We are nearing the end of this season. Last episode ended with Ryo in trouble and Xiuying arriving to save the day. In the games this rescue happened mostly off-screen, so maybe the anime will show some action. Click "read more" for my analysis and final thoughts.

The episode begins immediately where the last one left off with Xiuying standing in between Dou Niu and the injured Ryo; and cuts to the intro before any attacks are attempted. Tease! 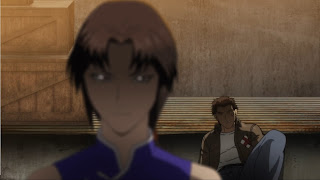 That glare though.
One theme song later, we see Xiuying wipe out Dou Niu's henchmen while Yuan's goons get knocked out by Yuanda Zhu. However, Yuan pulls a blade on Zhu and forces him to submit. Dou Niu is knocked back in one blow by Xiuying, but retreats after hearing that Yuanda Zhu was taken.
I can believe that is what happened offscreen. It was also nice to see that Zhu can fight.
Later, Ryo is in a church being treated for his injuries by Xiuying. Ryo thinks back and realizes that Xiuying has been saving him repeatably. Xiuying tells Ryo about her brother who left home to find their parents killer and it let him down the wrong path. She warns Ryo about making the same mistake, but he ignores the advice and leaves.
The guy just can't stand the idea of being wrong.
While Ryo is leaving, Xiuying stops him and tells him to fight her because if he cannot defeat her than he will not survive against Lan Di. Their match is one sided with Ryo unable to come close to rivaling Xiuying's vastly superiors martial arts skills. It ends with a warning shot to show just how over his head Ryo is using a move called Counter Elbow Assault. 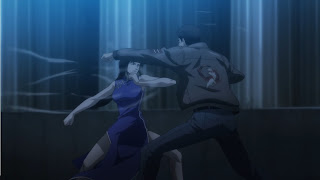 Xiuying teaches Ryo the Counter Elbow Assault and gives him a lecture on serenity, maintaining a calm state of mind like a polished mirror. She believes if he can achieve this state of mind than it will shield him from the dark path.
Ryo is very lucky to have such a great master care about him.
Elsewhere, while Dou Niu and Yuan are trying to figure out who Xiuying is, Ryo and Ren learn from Wong and Joy that Yuanda Zhu is being held captive in the Yellow Head Building which is the Yellow Heads base of operations. Entering that building is difficult, but Zhang knows someone who may be able to help them enter, so Ryo and Ren pay him a visit.
Upon arriving at an apartment, Ryo and Ren find it is pitch black and an old man asks for a sparing match. It is all a lesson on how to rely on senses besides sight. 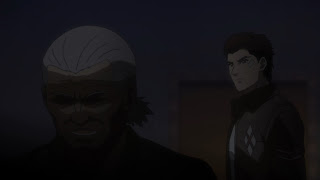 This old man was introduced much earlier in the games and Ren was not there during this event. It is interesting to see this new take.
This sparing match connects back to Xiuying's lesson on serenity and Ryo begins to pick up on the "minds eye" concept that this old man is trying to teach. 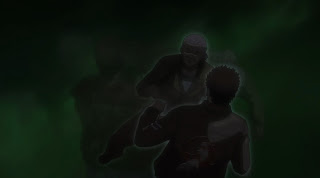 Training yourself to fight in the dark is a very real concept in martial arts. There are blind martial artists.
This old man is actually an old friend of Ryo's Father and is heartbroken to find out he was murdered. He tells them of a way into the Yellow Head building. while still inside that building, Ryo tries to convince Ren that he should not follow him any further. He implies it is for Ren's safety because he is willing to keep going until he reaches his goal and risk his life while Ren needs to stay alive to profit. Kind of sounds like Ryo does not want Ren slowing him down. Ren seemingly gives in and leaves.
Turns out the way into the Yellow Head building is through Street Fights. The Yellow Heads run the Street Fighting business and make a lot off of bets. So, by winning a bunch of these Street Fights, the scouts will be impressed and try to recruit Ryo or Ren. Now, Ryo begins to make his impression. 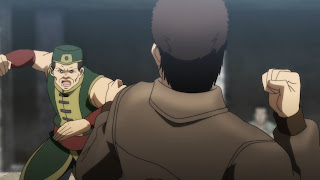 Leaping as high as a monkey.
Meanwhile, Joy and Ren have a serious conversation about why Ren is so involved in Ryo's dangerous journey. Joy believes Ren is a little jealous of Ryo because he is not afraid to break the "laws of the land" and says she is returning to Hong Kong. Ren leaves frustrated, obviously with a lot on his mind and it seems one of the Yellow Heads was spying on him.
After several off-screen Street Fights, Ryo is approached by the scout. He tells him to meet him at Dragon Street. 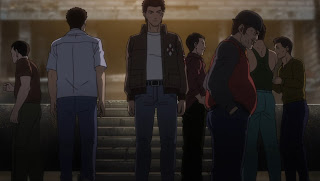 Bowler hat, sweater vest, short and chubby. All the makings of a dangerous gangster scout. In stereotype land.
We see one scene where Wong tries to convince Joy not to leave and that again teases Joy's tragic past. Also, Ryo is told by the scout to beat an opponent that is down the hall from them. 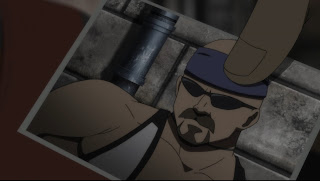 Ryo was given 3 opponents to defeat in the game. If they were only going to keep one I am surprised they picked Greg. Chunyan would have been my first choice because she was the strongest and was the only one whose fights were to the death. Would have been more interesting in my opinion.
Ryo defeats Greg in 2 blows and is given an address by the scout. Ren shows up really upset because he lost his bet he made against against Ryo. Meanwhile, Yuan and Dou Niu have made contact with Lan Di who will be arriving the next day.
What follows are several cutaways. Shenhua has discovered a diagram of the Dragon and Phoenix Mirror which appears to be her fathers big project. Joy is visiting her mothers grave and a flashback reveals she once lived a rich life before a car explosion killed her mother. Also, Wong finds out that they are spying on Ren through some eavesdropping. This episode is taking on too much.
Ryo meets up with the scout and is followed by Ren in secret. As soon as the scout opens the door to the Yellow Head building, Ren rushes up and attacks him. Ren learns that hostages' are kept on the 17th floor by interrogating the scout and steals a walkie-talkie from him.
Joy finds Wong and the two of them race to warn Ryo and Ren about the spying. However, Dou Niu has already located Ryo and Ren and the episode ends with them in danger. 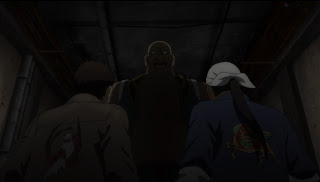 This episode was a case of trying to wrap up as many loose ends as possible. Normally this anime is pretty good at tackling multiple things at once, but this episode definitively felt more on the rushed side. It was not bad, but really shows how much content had to be trimmed for the sake of meeting the 13 episode limit. Honestly, it did not even feel like one episode, there was enough story here to stretch out 2 or 3. But, this has been the theme of the anime so far, therefore I cannot be too upset over one episode not getting the pacing perfectly. Overall, good episode and needed for the plot, but could have been a lot better if they only had the time. 3/5
Posted by Cendoo at 12:29 PM