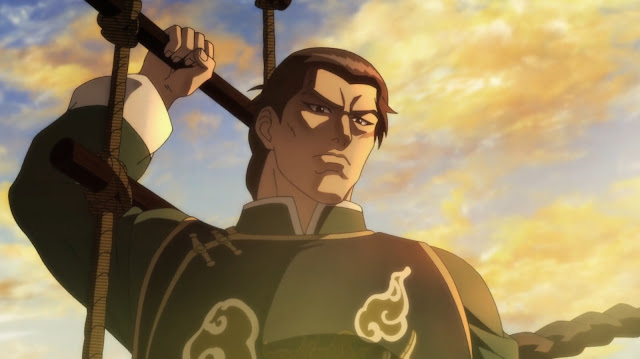 We are almost done with this season, only 2 episodes left. Everything should come together in this episode with Yuanda Zhu, Dou Niu, and Hong Kong in general. Let's not waste anytime, click "read more" and may the journey continue.

The episode begins with a recap of the last episode where Wong and Joy meet up and begin racing towards Ryo and Ren to warn them that the Yellow Heads have been spying on them. This information comes too late because Dou Niu has already found Ryo and Ren and is out for blood. Cut to intro!
The suspense builds.
One theme song later, we are back with Joy and Wong who are talking about what to do next. Wong wants to help Ryo and Ren but Joy tries to talk him out of it by reminding him how outmatched they are against the Yellow Heads. However, Wong is determined and even gives a speech about how much he hates the way he lives by stealing and wants to change because Ryo inspired him. He races off without Joy. 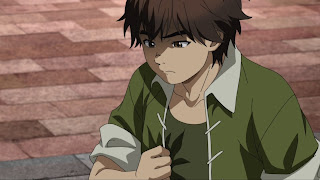 Wong looking up to Ryo was only implied in the games. One thing I have loved about this anime is that it lets us hear things from other characters perspectives.
Cutting back to the Yellow Head building, Ryo and Ren take off running from Dou Niu in order to find Yuanda Zhu. They manage to lose him after crossing a board in a gap in the floor and kicking it off. What follows are two separate chases. Wong and Joy are racing to find their way inside the Yellow Head building while also running from perusing Yellow Head members. On top of that, Ryo and Ren have come across Yuan who is now out for blood with a chainsaw. 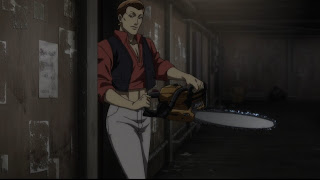 Nobody ever has a gun. Although I hear acquiring a firearm is really difficult on the East side of the globe.
Ren and Ryo flee the chainsaw wielding Yuan in a scene that reflex the QTE from the game. Meanwhile, Joy and Wong get inside the building when Joy tells the guards that she is the daughter of the White Thai. Their plan is simple, Joy distracts them with a phony meeting while Wong sneaks around in the air ducts to find Ryo and Ren.
Those two sneaking in to try and help really only served to get in the way of Ryo and Ren in the games. I wonder if they will do anything significant this time around.
Joy is revealed to be the daughter of Chung from the White Thai and Ryo and Ren learn she is taken prisoner thanks to the radio Ren stole. She puts up a struggle, but is knocked out by a martial artist dressed funny.
The second to last boss battle.
Wong sneaks around in the air vents before coming out into the room that Yuanda Zhu is kept in. Yuan shows up shortly after in order to bring Yuanda Zhu for the hand off to Lan Di. This makes Wong get creative, back inside the air vents, he uses his zippo to spook some mice outside in order to freak out Yuan. 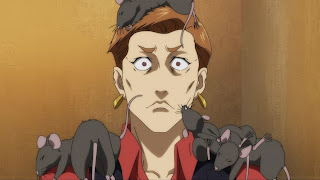 Yuan really gets tortured in this version of the story. Not that he doesn't deserve it.
With Yuan freaking out, Wong makes a break for it with Yuanda Zhu. At the same time, Ryo and Ren rush to the basement to save Joy. Master Baihu shows up and wagers Joy's freedom in a match with Ryo. Ryo has several flashbacks of all the lessons he has learned in Hong Kong and manages to easily overwhelm his opponent. The match is over in a flash. That was a waste of a cool villain.
Joy is free and Wong almost escaped with Yuanda Zhu, but is cornered by Dou Niu. At the same time Yuan snaps and tries fighting Ren and Ryo but is no match. Ren handcuffs Yuan inside an elevator and is threatened with garbage into telling them where the handoff of Yuanda Zhu is taking place. Yuan caves in and tells them it is on the roof, but still gets garbage kicked into him.
This was more satisfying in the games because it happened after getting the chainsaw away from him/her. You know, I am just thinking about what kind of crazy reputation Ryo must have after everything he has done to these gangs.
Ren, Ryo and Joy all race to the roof in one last attempt to save Wong and Yuanda Zhu. Once they get there, Lan Di is seen handing from a helicopter waiting to collect Zhu. We still don't know exactly why Lan Di hates Yuanda Zhu. Ryo's eyes glow red with rage at the sight of his Father's killer as the episode ends.

Just like last episode, this was a case of wrapping up as much as possible within a short amount of time. Master Baihu got completely short ended as he only served for Ryo to have a flashback montage and gets taken out far too easily. In addition, a lot of the fighting that took place in the Yellow Head building was cut out, no doubt due to time constraints. On the plus side, Joy and Wong did get much better writing than they did in the anime. While they both still ultimately got themselves captured, they at least had a plan that almost worked and we got to learn about Joy's backstory and why she has such hatred towards the Yellow Heads. That alone made this episode worth watching. It was clearly meant to serve as a cliffhanger for the finale and wrap up any loose ends, to that end this episode accomplished. While not my favorite episode, it is far from the worst and felt like they were really trying to include as much as they could. 4/5
Posted by Cendoo at 8:16 AM