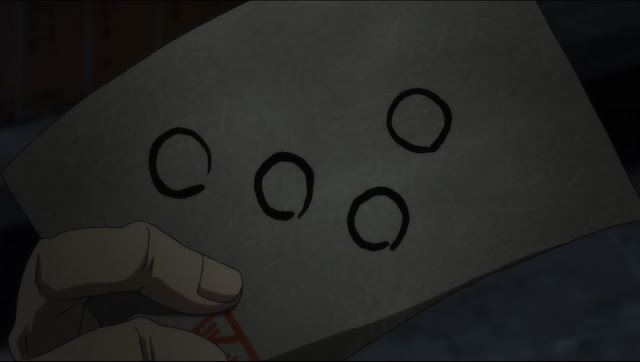 Ryo's quest comes to a brick wall when Xiuying sees through him and knows that he is out for revenge which results in her refusing to help him. However, Fangmei has brought Ryo a book written by Yuanda Zhu that is his only lead right now. Even though I already know generally what will happen, I am eager to see how they do it in the anime. So, click "read more" and let us begin the analysis.

The episode begins with Ryo going through Yuanda Zhu's book where he notices the name Sunming Zhao. (The person Lan Di accused Ryo's Father of killing.) More importantly, a paper falls out of the book with strange writing and circles on it.

Ryo returns to Xiuying's apartment while analyzing the paper. He sees Xiuying inside crying over a photo of her and her brother Ziming as kids before cutting to the intro.
So far so good. A lot of build up in a short time. On a side note, it's kind of depressing to see Nozomi still in the intro.
One theme song later, Ryo begins asking around about the the paper. This leads him back to Guixiang at the Yan Tin Apartments. She explains that the 4 characters on one side are a Chawan Sign, "a code in which members of the same martial arts school use to communicate with each other". They use Tea Cups. Also, on the other side, the 4 circles that look like a check mark, is the symbol used by allies of Yuanda Zhu. 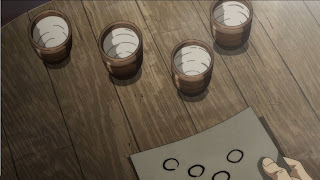 The Chawan Sign was one of the more tedious parts of the game if you did not know where to use it. But, it could be used to find secret cutscenes.
Following Guiziang's advice, Ryo begins using the Chawan Sign at places where people gather in hopes that an associate of Yuanda Zhu's will see it and respond. Amazingly, after waiting at only one restaurant, he gets a note from another customer. 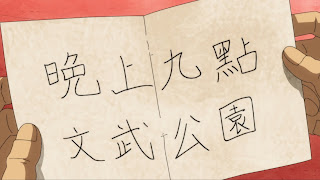 No I don't know what it says.
Not so luckily, the note led Ryo to the park at night where he got knocked out with a metal rod before he even saw who hit him. He has a dream where Lan Di kills him before waking up in Xiuying's apartment with a bandage on where he sees the Photo of Xiuying and Ziming.
Fangmei appears to lecture Ryo on not taking care of himself and explains that he was rescued by Xiuying. Master Xiuying never gave up on Ryo, no matter how reckless he acted. Ryo asks Fangmei about Ziming. He is given the story about how Ziming is Xiuying's brother and they grew up in an orphanage together until one day Ziming left and never returned. 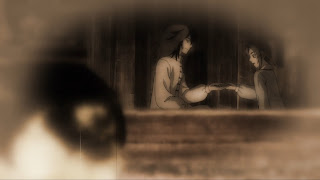 "I'll take my revenge even if I have to sell my soul." You never forget a quote like that.
Later, Ryo resumes trying the Chawan Sign only for an old man to inform him that he made a mistake and that a similar sign was seen at the Dou Jiang Diner. 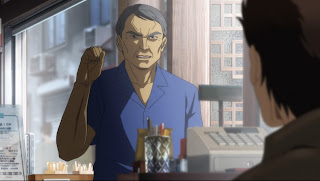 Zhangyu's Barber was easily the least eventful Wude lesson. I was wondering how they were going to work him into the story. I am impressed.
Since this old man, Zhangyu, is a former martial artist, Ryo asks to be taught the final Wude, he has Ryo follow him back to his barber shop. Once there, he gives Ryo a test by putting his blade to Ryo's throat. 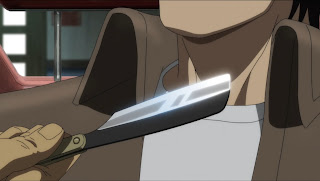 Ryo instinctively jumps back in a panic and fails the test so Zhangyu refuses to teach him Wude because he "lacks something vital". Not wanted to dread on it, Ryo continues trying the Chawan Sign, this time at the Dou Jiang Diner due to what Zhangyu had said. This results in Ryo getting a note passed to him while he is distracted with a fake phone call that tells him to meet at the diner at 8. Once that time comes, a new face greets Ryo.
This man, whose name is Zhang, introduces himself as someone in the service of Yuanda Zhu. But, before any information can be exchanged, a gang of Yellow Heads busts into the restaurant and grabs Zhang. 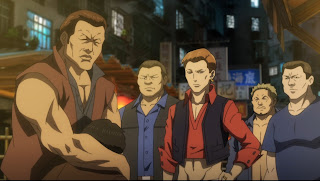 Looks like Yuan is staying a male in this version.
Ryo takes out a couple of the goons and makes a stand to save Zhang against the group and their transvestite  leader. (Named Yuan.) However, Xiuying shows up hidden and quietly takes out the rest of the goons without being seen which results in Yuan running away.
Safe now, Ryo shows Zhang Zhu's letter and learns that Yuanda Zhu is in hiding because the Chi You Men are after him. Zhang tells Ryo that the only way to find Zhu is to seek out Ren of the Heavens gang. Ryo goes to the gangs hideout without thinking. 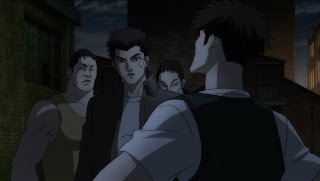 Unlike in the game, Ren is actually looking for Ryo at this point. Of course, Ryo has no way of knowing that so this is a really dangerous thing to do.
Ryo twists one of the gang members arms until he agrees to take him to Ren. Not to surprisingly, he leads him into an ambush where Ryo gets knocked out by a metal rod...again. Later, he wakes up on a boat that Wong lives on. 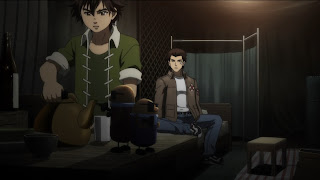 Living on a boat beats paying rent or sorting out books everyday.
Wong cannot help Ryo find Ren but gives him the gang's Zippo. He tells Ryo that he can meet Ren by telling the guards he came to pay him cash because Ren is a sucker for anything that can make him money. 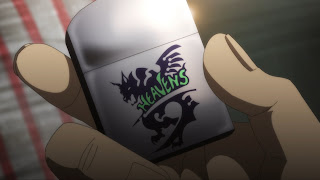 In the games, you actually had to pay HK$500 to meet Ren. It is kind of funny that this version of Ryo is just tricking him. 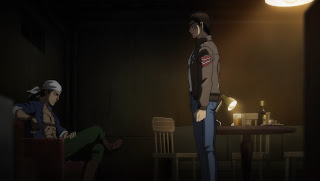 Ryo and Ren finally meet and Ryo wastes no time asking where Yuanda Zhu is. Ren says his famous line "may the Gods be with you" and pulls his knife to Ryo's throat, but Ryo does not flinch.
They changed this just barely so that it can connect back with the Wude lesson. Brilliant.
Ren agrees to take Ryo to Yuanda Zhu and has Ryo follow him.
Ryo never was good at noticing obvious traps.
Not to surprisingly, Ren does not lead Ryo to Yuanda Zhu but actually to a cash exchange involving Yuan. Ren turns the lights off, steals the money, and leaves Ryo to take the blame. Ryo fights his way out of that mess then chases after Ren through town. The two eventually end up in a construction site that results in both of them falling after breaking some scaffolding. 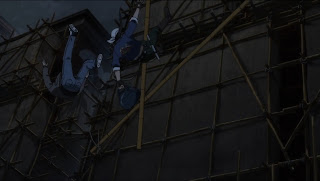 After landing on a truck, Ren sees the Phoenix Mirror that fell out of Ryo's pocket. Ren agrees to help because he has a hunch that there will be money at the end of Ryo's crazy quest but tells him how they are different. Unlike Ryo, Ren only cares about money and knows it is important to stay alive because money is useless when dead so he does carry a chip on his shoulder like Ryo and tries to avoid unnecessary risk. This gives Ryo the epiphany about the final Wude. That was forced.
Back at the barber shop, Ryo takes the test again and passes. The razor blade is place to Ryo's throat but Ryo "judged no threat behind it". This is the Final Wude; "never be shaken, remain calm and resolute to make a proper decision". DAN
There is more than one way it has been translated. Same general meaning though.

Be brave and stay calm to make the right decision.

Good thing no one tried to teach Ryo a Wude that he already knew.
Ryo returns to Man Mo Temple to talk to Xiuying and tells her that he knows the story of her brother leaving. Now, Ryo understands why Xiuying refused to help him and remembers her warning about being lead astray realizing it was out of concern for him and happened to someone in her life.
Xiuing again asks Ryo about his quest to learn the truth about his Fathers past and murder and what he will do after learning it. She believes Ryo will seek revenge and tries once again to discourage this; telling him the most important lesson of Martial Arts and it is used to defend and preserve life, not take it away. 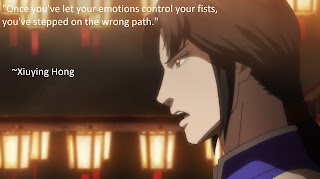 I really do like this take better. In the games Ryo's intentions are revenge right from the start, but in the anime he seeks to learn the truth and is unsure if revenge is what he wants. It's much deeper and plays more into the mysteries of the story.
This advice falls on deaf ears. Ryo simply says he no longer wishes to be a burden and leaves. The episode ends with an implication that Xiuying feels she has failed Ryo the same way she failed to stop her brother.

This episode was surprisingly emotional and a strong way to end the Hong Kong arc. I know the story of the games inside and out and did not think it could hit me like this again. But, the way they gave the Wude and the supporting characters a much bigger role really allowed the dialogue to have impact behind it. Making the Wude the beginning and ending of the Hong Kong arc that happened in sequence to everything else was unexpected but brilliant. Rather than just being a small but memorable part of one section of the story, it doubled as a way to progress the plot and have Ryo grow as a character and Martial Artist.
Overall, this episode what I have come to expect from this anime. It accomplished a lot in a small amount of time but did so in a way that does not feel rushed simply by having multiple things happen at once with small changes from the game so they fit together. This episode began and ended in the same place but had a large number of things happen in-between. Making DAN the final Wude was confusing to me at first, but I considering it was a lesson about decision making then it may have worked best as a means to transition Ryo. He made his decision to continue his quest despite Master Xiuying's warnings. Talk about impressive, it made the least interesting Wude event from the games into the most significant for the plot of the anime. 5/5 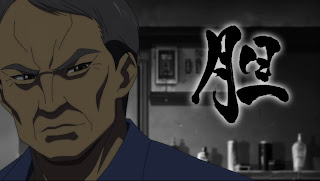 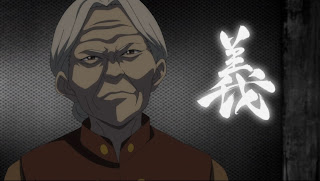 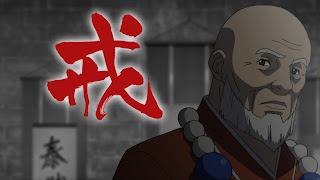 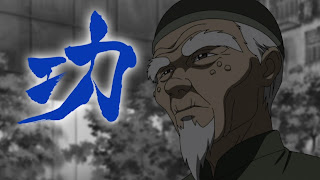