This is it, my favorite video game series of all time turned anime thanks to Adult Swim and Crunchyroll. I don't know much about this adaptation going in other than it will be abridged compared to the games as a lot of filler content is skipped over. That is a reasonable change. So, click "read more" and let the journey begin...again.

The episode begins with a flashforward to what appear to be the events that took place at the end of the second game with Ryo and Shenhua in a mine where the Phoenix Mirror revealed a giant mural of the Phoenix and Dragon Mirrors. Shenhua is narrating with the same speech she gives in the games that predicts Ryo's arrive. "From a far Eastern Land he shall appear." I hope this does not mean the anime will end where the second game ends. I was really hoping this anime would cover the story past the 3rd game. 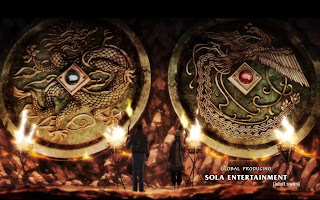 After this scene, we get the same black screen with white text that the games have to indicate that it is now November 1986 in Yokosuka. Cutting back to the beginning. Amazingly, the scene is actually slightly before the events of the first game as it shows Ryo about to leave for school and later a karate tournament with Fuku-san and Ine-san greeting him off. It is worth noting at this point that the English voice cast is not the same as the games. They also pronounce some of the names differently. Outside, we see Yamagashi-san talking with Ryo's father Iwo about his fish. Ryo greets them before leaving and is giving some encouragement about his tournament. 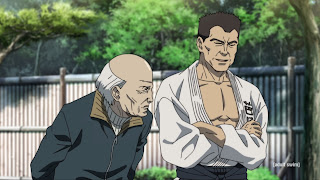 I was not expecting scenes like these and I really like them. In the games we learned a lot about Iwo's friendships but never really saw him interact with anyone besides Ryo and Lan-Di. It is also a little shocking to see Ryo before the tragedy. He seems really laid back and smiles a lot, a far cry from the serious revenge obsessed young man that fans know him as. This is going to be good.
The episode shows a brief clip of Shenhua in Bailou Village with a white goat before cutting to Ryo's karate match. Interesting, looks like Shenhua will get a bigger role earlier on. Ryo carries his schools karate team to victory, defeating the raining champion with one blow. A comedically anime bully. After the tournament, Ryo turns down celebrating with the others to head home and we also see that Lan-Di is fast approaching in his black car. Anyone who has played the games knows that things are about to go dark. On the way home, Ryo says hi to his friend Tom at the hot dog truck, its starts to snow, and he sees his friend Nozomi defending a kid from 2 bullies. 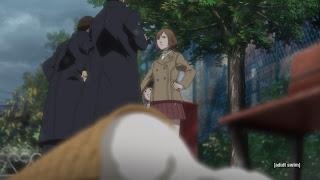 Trivia time! This is an optional encounter in the games that happened after the Lan-Di encounter so it may seem odd that they are showing it first. However, Shenmue 2 included a "movie" of the first game where they actually did have this encounter happen first like it is in the anime here. I have no idea if that is meant as an Easter Egg or if this encounter originally was supposed to happen first, but that is a pretty cool thing to think about.
Ryo steps in and quickly takes out the bullies; Nozomi's crush on Ryo is clearly shown. After this, the episode turns into the opening cut-scene of the first game with Ryo running home, seeing the black car and having seeing both Ine-san and Fuku-san have been attacked. Ryo rushes into the Dojo where his father is being attacked by a Chinese man named Lan-Di who is demanding "the mirror". Iwo gets knocked down which causes Ryo to rush in and also quickly get floored. However, there is a small change, in the games Ryo always has a bandage on his face and in the anime they made it to where Lan-Di is the one that caused him to need it. 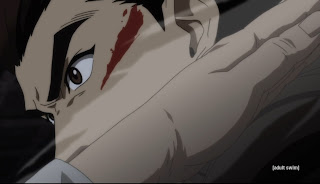 That's brilliant.
Lan-Di threatens to kill Ryo if Iwo does not surrender the mirror, a demand that Iwo gives into. Afterwards, Lan-Di tells Iwo that the "man he killed" is named Sunming Zhao. With that, Lan-Di delivers a fatal blow to Iwo, and his two goons have found the mirror. 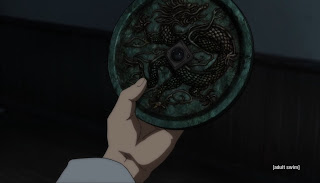 Great detail, but oddly big.
Iwo dies in Ryo's arms after telling him to keep his friends and the ones he loves close to him. Lan-Di mentions that there is a second mirror while in his car. A detail we did not learn right away in the games. We also get a look at The Great Chai who declares he will go after the second mirror to please Lan-Di. 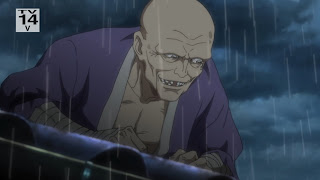 Talking about trying to get all the important details on the table quickly.
A few days later, Ryo is in his father's room as the police stop by his house to start an investigation. Ryo has no faith in the police and presses Fuku-san for information on the killers. Both Fuku-san and Ine-san urge Ryo to not pursue the case out of fear for his life and leave things to the police. But, he just cannot stop thinking about it.
A few scenes with dramatic music later, Ryo runs into Nozomi who actually manages to make him laugh and take him to lunch. During these events, Ryo learns that Tom's Hot Dog truck was smashed by Lan-Di's black car and also splashed mud on Nozomi. Soon, while at the Ajiichi Ramen Restaurant, Ryo reveals the name Lan-Di to Nozomi when a friendly old man over hears them and recognizes that name. 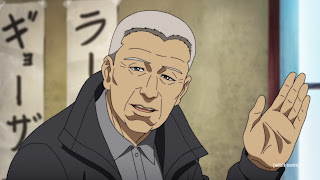 Looks like we won't be hearing about the 3 Blades in the anime.
This old man (Liu) can tell from the name Lan-Di that he is most likely associated with the Chinese Mafia who are known to work around the immigration system by working at the docks.
If anyone who played the first game is keeping score, that was the black car, Chinese people, the 3 blades, and sailors all covered in a few minutes. I remember the sailors being my first point of getting stuck.
Ryo is back home where he is still wondering what all this means but believes that there is nothing he can do. He notices his Dojo's door is open and upon investigating, The Great Chai attacks him. Chai believes that Ryo knows where the second mirror is and tries to beat it out of him. At first, Chai is winning, but Ryo has some flashbacks and begins to understand his Father's martial arts advice on how to defeat stronger opponents. It is all about reading their movements, Ryo is now calm and in control of the fight. 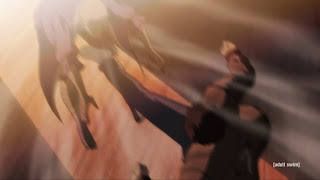 Shenhua's prophecy about Ryo is heard again, specifically the part about his unknown potential. Ryo kicks Chai out of his Dojo who then runs away. Fuku-san rushes over to check on the situation and upon learning it, he urges Ine-san to call the police. However, Ryo stops both of them revealing his has now vowed to learning the truth about why his Father was killed. Ryo claims since he never fully understood his Father's advice that he needs to learn about his past so he can understand him and make sure he is the man he thought he was, referring to the fact that Lan-Di claims Iwo killed someone. 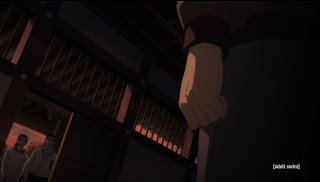 While this story is in the games, it was never directly stated like it is here. Interestingly, Ryo does not simply vow revenge like he does in the games, but rather his goal is to learn the truth. In fact, Ryo never mentioned revenge, although it is possible that he is simply hiding that fact from these 2.
More trivia, in the first game you fight The Great Chai twice. The first fight with him is one you are slated to lose due to the difficulty and not getting any retries. However, there is an obscure Easter Egg where if you actually manage to win then Ryo will have a personality change with some more confidence for a short period of the game. Now, in the anime, Ryo does not have confidence he can succeed in his quest until after he defeats Chai. Is that a nod or a crazy Easter Egg? I do not know but either way it is amazing.
With Ryo's vow, Ine-san decides to give him a letter that is addressed to his Father from Yuanda Zhu that arrived after he died. Looks like Charlie does not get to be in the anime. The episode ends by showing Lan-Di, Shenhua, and Ryo looking into the sky with strong eyes.

This episode was fantastic. Even though I knew a story driven game could easily be translated into a series,  I was nervous about watching this anime because I have such a strong attachment to the games. But, it turned out better than I could have hoped for and actually re-ignited my love of this story. This single episode covered most of the events of the first disc of the game and even through in some extra stuff that helped bring the characters to life. There were some minor changes made like Ryo being hesitant to start his journey, but I feel like they were all for the best as while it was unnecessary in the games, it helped tell an arc story. Action and animation were also great. Very anime style rather than the realistic style that the games went for.
If there is one thing I have mixed feelings on was the English voice acting. I am not bitter about not having the same voices from the games, and for the most part they do a good job even if some of the voices are a little too familiar for people who watch a lot of anime. The one exception was Lan-Di, his English voice is terrible. He does not sound scary at all like in the games and even pronounces Sunming Zhao completely wrong. (Which is really sad if you know the story between those 2 characters.) Yamagashi was also pronounced differently than in the games, but that was is debatable as to which pronunciation is correct. Perhaps watch it in Japanese with sub if doing so doesn't bother you, but if that is too much than the rest of the voice cast is good enough.
Overall, this was a very strong first episode. Voice acting is a nitpick, but besides that I could not think of anyway that this episode could have been better. This anime is exploring a lot of the lore for the characters that the game skipped pass and I am greatly looking forward to seeing more of that. 5/5
Posted by Cendoo at 12:00 AM