A Run Down Of The New Mario Kart 8 Deluxe Tracks

Today after nearly a decade from release, Mario Kart 8 got a brand new update. It's nice to see Nintendo are releasing newer updates of their older games. I hope they continue to do more of this in the future. But is the new "Boost Pack" worth it? 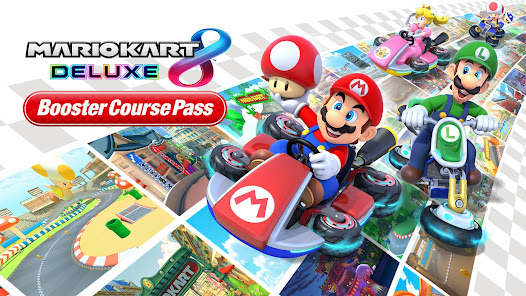 Upon release, today - there are only 2 available cups to play on. The rest come out at the end of 2023. That's a really unusual timeframe to release all of these tracks over the next two years instead of releasing them over a period of a couple of months. Looks like Nintendo really want to hold off the release of Mario Kart 9, which is a shame. I highly suggest if you haven't signed up to Nintendo Switch Online service yet, do so - because that way you can get these cup updates for free.

Nintendo have spanned out strange updates like this on other games such as Animal Crossing New Horizons and the upcoming Wii Sports Club too. The first one is called the Gold Boost Cup. The four new stages it features are:

I enjoyed Paris Promenade the most out of all of the other tracks, but it's also nice to see Mario Kart 7 get a bit more love.
Paris Promenade is probably the best track on the entire list. It's got a great length and has a lot of very tricky twists and turns. A lot of the arrows you see are hidden by the corners, making it very tricky to navigate around, and the music is also glorious. Next up, is Toad Circuit from Mario Kart 7. I really enjoyed Mario Kart 7 and i'm happy that this track is remade for Mario Kart 8. The third track is the famous Choco Mountain for the N64, I was actually very surprised that it was included here, and it looks great. Lastly for the Golden Dash Cup is everybody's favourite stage, Coconut Mall from Mario Kart Wii. The Golden Dash cup seems to have more variety over the next cup, which is called the Lucky Cat Cup. It includes the following courses:
We already have 2 stages from the 1 game on the Lucky Cat Cup. I didn't really enjoy Tokyo Blur as much as Paris Promenade. Tokyo Blur felt a bit bland in comparison, and was a bit short. Shroom Bridge is a great stage because it's another one from Mario Kart 7. I think Shroom Bridge was my only favourite track in this cup. Lucky Cat Cup loses more points instantly for including Sky Garden on the GBA. One of my most hated stages from Mario Kart Super Circuit. Super Circuit had a lot of great tracks, that were all original. Why would they choose the worst track in the game to remake. Other tracks in the game were better. Lastly, Ninja Hideaway is from Mario Kart Tour. I didn't really care about this track at all. I'm not big on Ninja stuff, but this track just felt way too short. There are some cool moments in it where you can drive upon different levels, but other wise there is nothing really special about this track.
It will be really interesting to see what other tracks make it into Mario Kart 8 Deluxe's future Boost Pack releases. I really like how Nintendo are continuing to support this game, I hope they provide other future updates to more of their older games. It's about time Mario Odyssey gets a new update. Sadly the updates in Animal Crossing - New Horizons felt empty in comparison. I hope Sydney from Mario Kart Tour gets included on the future Boost packs.
What do you think about the boost pack courses? Are you disappointed that Mario Kart 9 isn't out yet? Let us know!