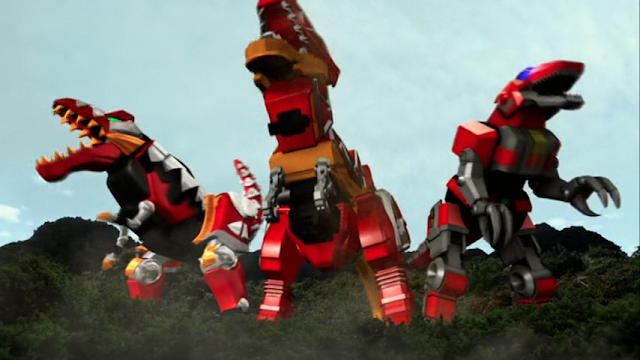 Time for the Red Rangers' Zords. One might think the leader would always get the stand out Zord, and sometimes times they do. But, surprisingly, there are a lot of re-used concepts for Zords among seasons and that can be off putting when trying to compare them. From T-Rex's to birds and way too many borgs. Granted, this is more of a problem for countdowns like this and not necessarily the individual seasons. But, risks were clearly kept to a minimum for the Red Rangers. Save the lone warrior Zords for 6th and Extra Ranger I supposed; whom are not allowed on this list. Regardless, click "read more" and let's begin the countdown.

I bet you didn't even know the Skyship was a Zord. Well, pay attention to the Megazord combining sequence and the ship does fill the Red Rangers slot. While Rangers have had a small collection of living conditions while on Ranger duty, this is probably the only solo "Zord" that the whole team could live in. I know, the Mega Rangers did not live on the Skyship like their Sentai counterparts did, but it is clear that it was possible. Regardless, it is a flying pirate ship that allows the rangers for world wide explore. I would put it higher if it wasn't so under used due to Super Megaforces rushed plotline over a mere 20 episodes. 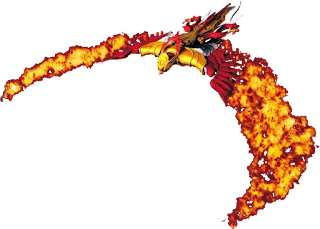 This is a choice done mostly for the epic design of this Zord. The Firebird is one of 2 Zords needed to combine for the Manticore Megazord. While the other 4 Rangers all had to share the Mystic Lion, Nick got his own and it came in hot. Very obvious abilities, it can fly and spread fire. A phoenix design clearly which is one of my favorite mythical creatures.

You can argue that Hunter and Blake are extra Rangers, but I do not think they are. They are the core Rangers of their own Thunder Team. Anyway, just like how Blake's Zord made my blue list, this Red Beetle theme is a really cool tank like Zord that even has a cool cockpit. It is a real power house and one of the most practical in terms of combat utilization. It is very rare to see anything bug themed in Power Rangers because the creators of its father series Super Sentai tend to save the bugs for Kamen Rider. So, that alone gives these two Zords a novelty feature on top of its cool design.

I don't think any Zord has had more personality than the Red Lion from Wild Force. All of the Wild Zords are sentient, but the Red Lion has had an unspoken voice throughout the entire season that was interpreted by Cole. It was also a brave creature that charged at any enemy and had many
many combinations for Megazords. It would even ignore the pain a combination would cause it in order to combat a strong enemy. If all that is not enough, this is the only Zord that returned for a future season and even combined with a different teams Megazord. Hear the lion roar. 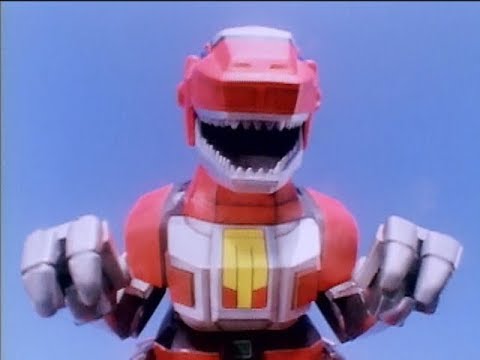 Between Jason and Rocky there were a lot of iconic Red Zords from the original Rangers, but the very first T-Rex takes the cake. This Zord has defeated monsters on its own and even taken on the mighty Dragon Zord by itself. For offense, the Tyrannosaurus swing its tail, stand on its tail to do an air kick, and has a breath attack that can turn monsters into dust. Tyrannosaurus was the first Red Ranger Zord, one of the first Dinozords, and remains an icon to Power Rangers as a whole to this day.
Those were my top picks for the Red Rangers Zords. If you happen to disagree with my choices, please leave a comment for your top 5. Or, if you would like to discuss this topic further, you can join our discord server. For now, I hope you enjoyed this trip down memory lane with me and I hope to see you next time. This has been Cendoo the Ghost Ranger, now signing off.
Posted by Cendoo at 12:00 AM