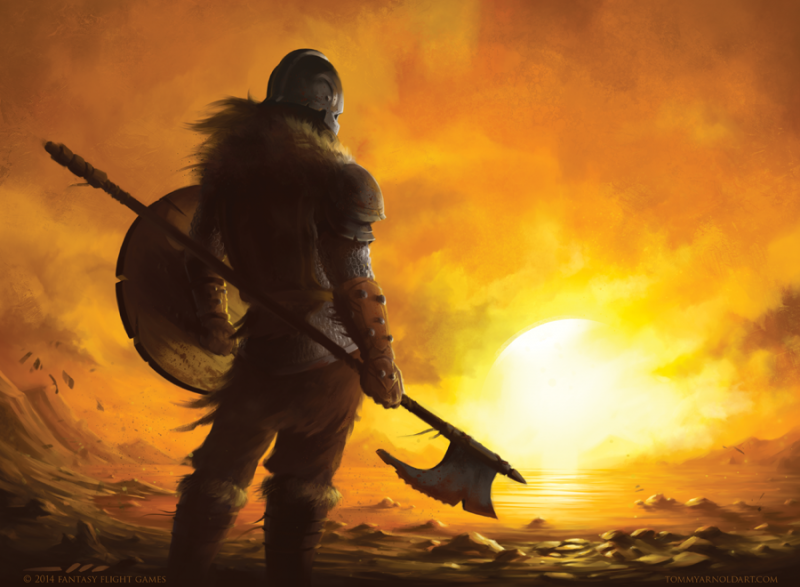 I am back from HarmonyCon and I am ready to talk some shit about A Song of Ice & Fire, the (hopefully) ongoing fantasy series by George R.R. Martin. Those of you who are not of the reading disposition may know this series better through its television adaptation, Game of Thrones.

Now everyone and their mother has given an opinion on the final season of Game of Thrones and how much of a fucking catastrophe it truly was; an opinion that I agree with and thus feel I have little to nothing to contribute towards. But what some people may not know is that I actually think that there is an element of the George R.R. Martin's world that is born from the author's own mind that I actually think was a major missed opportunity and a failing on his part.

My problem stems from the Ironborn, the Viking inspired pirate civilization that lives on the barren rocks to the West of Westeros. Considered primitive and inherently untrustworthy, our most present viewpoint of Ironborn culture for most of the series stems exclusively from Theon Greyjoy, who is a prisoner (ward) of House Stark following a massive failed Independence movement perpetrated by Theon's father.

Theon's story soon expands to include several other characters that shift the focus of the story towards the selection of a new Ironborn king, which leads to Theon's uncle usurping his sister's position and placing both of them in potentially dangerous political waters, with implications that Euron Greyjoy has something very magical and dark going on in the background. In the books, this storyline has yet to be fully actualized; but the TV series did precisely dick-all with most if not all of the Ironborn plot (a fate seemingly shared by the Dornish).

But I think that there actually was a storyline that Martin could've made had he recontextualized Balon Greyjoy's independence movement and the general relationship between the Ironborn, their own history, and the Iron Throne as a whole. One that could've helped to build conflict between the Westeros as a whole and feed indirectly into the larger plot involving the Others.

Before we can fix the Ironborn's plan, we have to explain why it, as this segment's title so eloquently puts, makes no damn sense at all from a tactical or strategic perspective. And before that, we have to know what Balon, Victarion, and later Euron, actually want.
Within the context of the book series, the Ironborn remained largely neutral during Robert's Rebellion, when Robert Baratheon and Eddard Stark fought to overthrow King Aerys II Targaryen. At the time, the Iron Islands were ruled by Balon, Victarion, and Euron's father, Quellon Greyjoy. Now Quellon is important because he was something of a "progressive" as far as the Iron Islanders were concerned, rejecting the "Iron Price" promoted by the Drowned Priests and promoting a culture of reaving for the Ironborn. However, Balon was able to convince Quellon to initiate raids on Targaryen supporters in the Reach as a means of making some money from the entire Rebellion and cozying up to the rebel forces, a decision which led to Quellon's death and Balon's succession to the Lordship of the Iron Islands.
Balon then counted on the new Baratheon dynasty to lack the public support necessary to enforce obedience and declared the Iron Islands independent from the rest of the Seven Kingdoms. Which was an incredibly stupid decision, as Robert was popular enough to get all the Seven Kingdoms to unite against the Iron Islands, kill two of Balon's children, and force the complete surrender of the Iron Islands and destruction of the fleet. Following the war, Balon's only remaining son Theon is sent to live in Winterfell as a ward and hostage to motivate Balon's obedience.
We then cut to almost a decade later and when the War of the Five Kings starts up, Robb Stark, the newly elected King in the North, sends Theon to parley with his father to ally the Iron Islands and the North together to fight off the Westerlands and Reach. Balon then decides that instead of allying with the North, he will invade the North and reave and pillage it since all their soldiers are fighting in the South. An action which directly results in the fall of the Northern Independence movement and once again unites the Seven Kingdoms against the Ironborn, an almost exact repeat of his previous defeat.
When Euron kills Balon and usurps the throne during the Kingsmoot, he shifts his focus of Ironborn independence to the brilliant idea of stealing dragons of Daenaerys Targaryen and taking over the Iron Throne themselves.
And here lies the major issue. Balon, Victarion, Aeron, and Euron seemingly never learn anything in the decade between their first Rebellion and the War of the Five Kings. Nor do any of them, for all their love of Ironborn heritage seem all that inspired to examine and learn from Ironborn history. The Ironborn have a very particular message written all throughout their history in A World of Ice & Fire and by examining this, I believe that we can learn very quickly that Balon and his brothers are rather idiotic.
And rather than seeking independence on their own with no outside help, or the even dumber idea of trying to conquer Westeros with dragons; the Ironborn should instead be operating on a much more nuanced plot that could actually integrate them better with the other storylines presented in the book, streamlined their inclusion in the show, and actually set them up as a major obstacle for Jon Snow's plotline at the Wall.
Rather than seeking independence on their own from Westeros, they should be working towards the abolition of the Iron Throne itself, and allying with the Kingdoms of the North, Riverlands, and Dorne to achieve it.
***

Ironborn History and the Iron Throne

Ironborn and the War for the Dawn

Jon Snow's storyline in A Song of Ice & Fire is fairly straight-forward and isolated from most, if not all, of the major players in the story. This is especially the case following the Red Wedding and the death of most of the Starks. Essentially, Jon's story details his rise to the Lord Commandership of the Night's Watch and his efforts to unify as many people as he can to face the Others, including the Free Folk from Beyond the Wall.
This is an effort made more difficult by the War of the Five Kings, but would be made substantally if not impossible to achieve under a divided Westeros should our new timeline's Greyjoys and Starks be successful. While on one level, a victorious Robb Stark actually ensures that Jon's position at the Wall has a potentially stronger ally, the presence of Catelyn Stark might make his chances of getting Robb to listen to his pleas less likely, as she might see his alliance with the Free Folk as a plot to invade the North or grant himself a Crown, a thing which happened in the history of Westeros.
We also have the antagonism of Stannis Baratheon and any independent North, as Jon Snow had to ally himself with Stannis and Stannis will never accept Robb as King of the North, so I can almost certainly see a war going on between the two if Tywin is defeated down south. Otherwise, Stannis might be the impetus for Bran's exodus from Winterfell and we could have a fight between Ramsey Snow and Stannis with Ramsey as a "good" guy (as weird as that idea might be).
And with Jon trying to gain any ally he can, it may ultimately come down to establishing a Great Council to spread word. I could actually see Daenaerys Targaryen, the newly independent Kings all coming together and Jon Snow or his followers rolling in with a wight to prove the existence of the Others as a possible resolution to the crisis. But prior to such a thing, an Ironborn alliance could actually result in an emotional story of brothers fighting brothers, as Theon and Jon actually dislike each other very much and a more chaotic internal division brought about by Jon being opposed to the independence movement, for admittedly good reasons, is deeply compelling to me and actually has me taking a much closer look at just what a more logical Iron Islands storyline could do to the overall direction of the series.
Well...we will leave that to fanfiction, I guess.
***

Thinking on just what the Ironborn's storyline could've been had George R.R. Martin redirected the characters to be more tactical and strategic really has me disappointed in the storyline that we did get. The whole story of A Song of Ice & Fire, and especially what little we get of that storyline in A Game of Thrones, had so much potential but seemed to focus more on the Ironborn being uneducated and brutal pirates, when the idea of them being manipualtive and long-term schemers with dreams of past glories resonates so much more to me.
Building the Greyjoys as people with the kind of presence and pride in their own people, transforming them into legendary figures like Ragnar Lodbrok or Ivan the Boneless in our own history, seems far more compelling. A simple alteration of the Ironborn's plot would also streamline the story and ease the introduction of other characters whilst still leaving room for the dark and dramatic elements that we have long since grown to love.
In fact, I don't think I've seen anyone really examine what such a story would actually entail. It's a fascinating idea to explore, shifting the Ironborn to be a little more like tactical conquerors and a little less like dumb raiders. They were inspired by the Nordic cultures but Martin seems to have gone too deep a focus on the stereotype of Vikings rather than the rich history and legacy that the Norse had on the wider world.
And the story is all the lesser for it, in my opinion.
***
I would like to thank my monthly Patrons for their support of all of my content. You can join my Patreon for Behind-the-Scenes, Polls, and other fan interactions here.
MONTHLY PATRONS
Cendoo
Posted by The Brony Critic at 12:00 PM