Cheap Cheevos #4 - Some Good, Some Bad, Some Ugly. 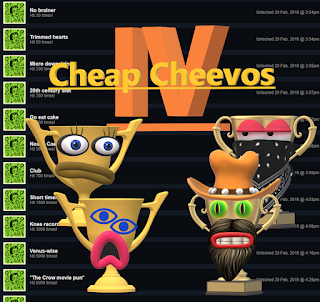 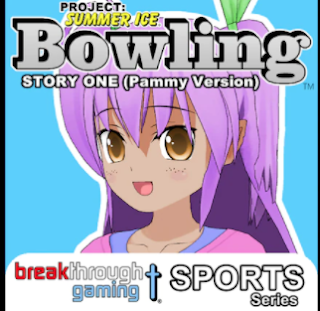 An epic tale of love, bowling, Christianity, and six very easy to gain platinum trophies.  Okay, it's far from epic, quite a lame story really.  This series takes perspective of two girls named Jane and Pammy.  Jane is a shy girl with long brown hair and glasses.  Pammy is a very excited girl with pink hair.  Jane has a crush on a boy named Mark. Pammy just wants to help her friend as she believes that is what a good Christian would do.  Jane and Pammy run into Mark at the local bowling ally, giving Jane the perfect opportunity to hang with the Markster.

It's not a good story. Lazy writing, bland characters, and both versions share ninety-nine percent of the same cut-scenes.  The only exclusive scenes that you'll get is when each character is not with the other. You'll get one to two exclusive scenes with each game.  Each chapter is super short and can be read in about five minutes.

There are even more problems to be found in the gameplay. For some reason, the game is controlled with a big mouse cursor.  The resolution is incredibly low. It looks like a Game Boy Advance game that has been stretched out to fit on to a big screen TV. It's quite the pixelated mess. Don't even get me started on the super bad and lazy graphics that were ripped right out of Manga Maker ComiPro.

The worst part about this series is that the bowling gameplay is dreadful. Sure, it's a working bowling game but it could have used a lot more work. The physics are wonky and loose to where the bowling ball doesn't act like how a bowling ball should. Animation (or lack of) is lazy. The ball doesn't even roll! It just slides! The pins don't knock over either. They just simply vanish into thin air. God must be the pin collector.

Gameplay is super basic.  All you do is just tap X to line and throw your ball. This is as basic as they come. While it does work, it's still a very lazy system that will leave you wanting to turn off the game. The only thing keeping the sanity together is how easy all of the trophies are. Funny enough, every part uses the exact same method for earning that sexy platinum.

First of all, beat all of the story modes. Just mash X to skip past the boring story. Story mode will have chapters where you'll have to play the bowling game. These sections have trophies. Just knock down a certain amount of pins on each of these sections and more trophies will be unlocked.

Lastly, you will have to play the stand alone bowling mode. Yup, it sounds painful, but thankfully it is short. First set of trophies to unlock is for playing a game as both characters. Yup, both Jane and Pammy appear in this mode and in all six games. After that, you have got to bowl a perfect game. You'll get a bunch of other score trophies along the way, however the perfect game is the endgame. It's a simple task. Just knock down all thirty pins. You do not need to get any strikes and you'll get two chances to knock down ten pins per round.

If you try to attempt this in the typical bowling game way, you'll be right out of luck. The wonky physics will ruin any chance of that happening. Thankfully, I know of a special little method of completing this game. First step is to stop your ball while it is either at the top or bottom of the screen. After that, make sure the balls aimer is aiming to the opposite side of the field that your ball is on. Next, LAUNCH THE BALL!

This is only half of the method. You'll still have some pins remaining. To get the rest of the pins, make sure that the ball is on the opposite side of the screen that it was on during the first turn. So if you launched it from the top on turn one, launch it from the bottom. Vise versa for if you started that turn from the bottom. After that, make sure the aimer is aimed at the wall opposite of where your ball is and LAUNCH THE BALL!

Yup. No gutters are in this game. This special method may take a few tries to get right. That is how you add six super easy to earn platinum trophies to celebrate about. Another game only for the trophy hunters. If you are a casual gamer looking for a good time, stay away from this load of you know what.

More episodes were released after I had originally penned this section of the article. Will we see them in the future? Who knows. 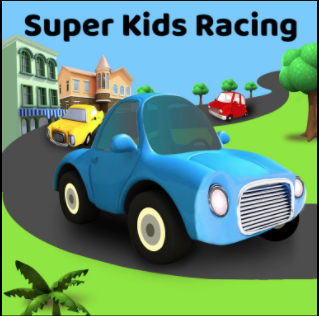 The Playstation 4 can't seem to catch a break here at Cheap Cheevos.  Lots of easy trophies covered, but no good game attached to them (minus the rare few).  This game is another s##t show.  This is Super Kids Racing.  A poorly programed racer that is made up of a bunch of cheap Unity Assists that you've seen in other bad Unity games.

Thankfully the achievement/trophy hunters do not need to play this one for long.  Just collect one-thousand-two-hundred gold coins and you'll have all four trophies.  Hang on?! We only get four lousy trophies for playing this pile that would make for a better medieval brain breaking device than a game?  F**k me!  At least three of them are gold.  Not only is this game not worth playing, it's also not worth raiding for free trophies.  But if you are after another easy to master game for your profile.  You've got this. 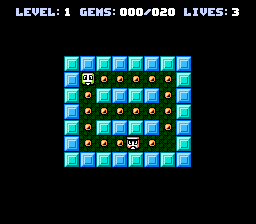 Chase, is a very simple Pac-Man clone about a little green dude trying to collect coins, while being chased by non-green grumpy dudes. Chase has some key differences that help to make this game feel like its own thing. Firstly, you won't be able to defeat the non-green grumpy dudes. Thankfully, they are slow and easy to avoid. You can start and stop the main character on the spot, unlike Pac-Man whom can't stop unless he hits a wall.

There are only five levels and yes, all of the mazes are completely different from one another. The designs of them were okay. I liked how they were all different in sizes and how the paths were set. I also liked how each level used different colors, so you don't get a standard Pac-Man maze with a black background and blue rails. You'll get more variety than that.

This simple game has a very simple achievement set. You'll get a bunch for just beating all five stages. The only challenging one (I say "challenging" very loosely) is beating the game without losing a life. This isn't hard to do at all. The non-green grumpy dudes are very easy to predict and avoid. Shouldn't take more than ten minutes (factoring in game restarts).

This game is also a homebrew title that you can play for free in both money and guilt. Hell! I can link it to you right here in this article. Check it out. It's a good time waster: https://www.romhacking.net/homebrew/73/ 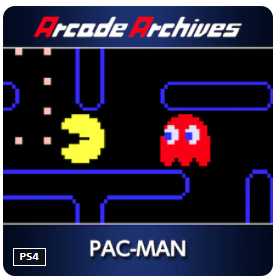 If you thought that mastering fun Pac-Man clones was a satisfying experience. We've also got the real thing included here. This is Pac-Man for the Plasystation 4 as part of Hamster's brilliant Arcade Archives series.

What is there to say about this?  It's Pac-Man.  The same old arcade Pac-Man that we all know and love.  Granted, this version is incredibly well emulated. Looks very great, plays well, and even has dip switches. This version also holds a set of very easy to get trophies.  Two of them are leaderboard based and the rest are score based.

To get the leaderboard ones, play Original Mode and Hi Score Mode, get a certain but very small score, get game over, and submit your score to the online leaderboards.  Each mode has their own leaderboard, so you'll have to play and submit a score in each mode.  The rest of the trophies are all score based.  You'll unlock them for earning 10,000, 15,000, and 20,000 points.  You don't have to play for long to unlock these.  Only a couple of levels will do.  If you feel that the task is too hard, you can mess around with the game settings and set it to an easier setting. There's also a trophy for beating the high score, which you'll earn naturally.  It's a very low score.

Overall, this is a very well done port of Pac-Man.  However, this isn't the version that I recommend for everybody. Why? The reason is simple.  There's another official version of Pac-Man on the Playstation 4 that's way cheaper and nearly just as good.  The Arcade Archive version is a whopping $10.50AU title, while the other Pac-Man is around $3.  Yeah, huge difference in price.  I only recommend this for trophy hunters and for those who are collecting all of the Arcade Archive games. 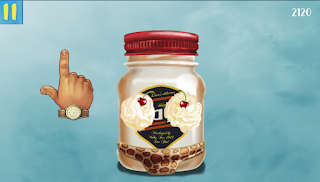 Perhaps the most story driven game to have ever graced this series so far. My Name is Mayo has you tapping on jar of mayonnaise over and over and over and over. Yes, it's a clicker game, so there's not much to do other than tapping on that jar. The main goal is to reach ten-thousand taps, however there are side goals too. Weird sub-stories will pop up and you can select these to give your jar a nice, sexy costume. (Not making that up). Click on these costumes a certain amount of times to unlock more and then repeat until you've unlocked them all.

The way this game plays is also how you'll get all of the achievements. Click on all of the costumes a certain amount of times, while aiming to reach ten-thousand hits. It's super easy, even though it may take two to three hours to do. You don't have to do this all in one session, so you can take a rest if you'd like.

Overall, this is an incredibly novel game that's worth playing at least once. You'll be entertained, you'll laugh, you'll cry, and you'll gasp for air from overworking your fingers. Classic meme game.

Posted by Retrokaiser at 6:28 AM