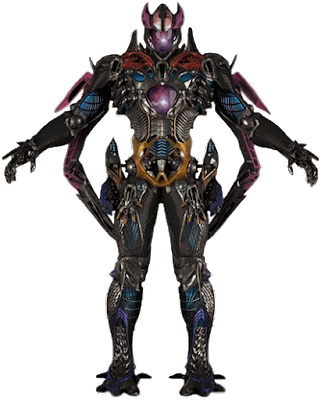 Well, now that I am done counting down my favorite Zords, I may as well talk about my least favorite. Technically a worst list, but I can't think of any Zords I actively dislike, so there was no way I could do this for each color like my favorites. So, pressing myself hard, I will count down my bottom 5 least liked Zords. Any type of Zord or group of Zords is fair game this time, so click "read more" and let's get started.

Disclaimer - I already know that Zords are based on Sentai footage and Power Rangers creators have little to no control over their designs. 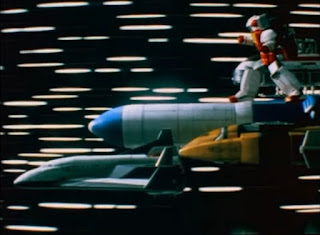 This group makes the list because it is just boring. The Mega Voyager is a decent looking Megazord, but the individual Zords are just plain looking ships, except for the Red one which is just a red robot. I will admit, that given the season as a space theme these Zords do fit and I don't believes they were meant to stand out individually too much. But, some distinguishing characteristics besides color for the ships would have been nice.

As far as 6th Ranger Zords go, this one is probably my least favorite. It is not a cool animal or vehicle, just a piece of architecture which is not too exciting to see fight. Belonging to the Gold Zeo Ranger, it is a Pyramid with fits and a garage that can turn into a very fat looking Megazord. It also can combine with the other Zeo Zords where it serves as a carrier ship for them. The Gold Ranger was known as the King Ranger in Sentai, so you can stretch to say a Pyramid would fit as Pharos are like Kings. Granted, I doubt I could make a more interesting looking Pyramid themed Zord and it does work well as means to carry every Zord in a battleship sense. But again, Pyramids are not interesting to watch fight.

Every Turbo Zord was a cool car except Adams/Carlos. Red was a race car, Blue got a 4x4 truck, Pink has a sports car, Yellow drives an SUV, and Green is a mini van. Even Adam's actor Johnny Yong Bosch knew it was lame and asked if Adam could be bummed about it like he was the Frog Ninja Zord; his request was declined sadly. To be fair, it is at least an interesting looking van and very clearly a Turbo Zord. Still, unless it is for a family, I cannot imagine anyone picking this vehicle if all 5 were an option. At least the green Rescue Zord, being a dump truck, was not so bad.

These two are a tie because they are exactly the same minus the color and horn. The Sabretooth Tiger and Triceratops Dinozords upgraded into the Griffin and Unicorn Thunder Zords and these two are a prime example of Zords that are Megazord parts first and individual designs second. They become the legs of the Thunder Megazord, and individually they just look like legs with heads that pop out. No doubt, these Zords were never meant to stand out on their own, however that does not excuse their lazy designs.

Talk about Hollywoodization. The new armored Ranger suits I could accept, but the Zords, especially Megazord, have a much more gray color scheme that make them look more suited to be villain Zords. This one makes the top of the list because it is the only set of Zords that cannot use the Sentai footage excuse; these are all American made. If it is not broken then do not fix it; that may be an old cliché but it still holds true. But again, I do not hate them because they still at least look like fighting machines that are capable.
Those were my choices for my least favorite Zords. Although, I can see how anyone could be a fan of any of these Zords. So, if you are then please share with me why or list some of your least favorites in the comments bellow or discuss it with us on our Discord page. Until next time, this is Cendoo the Ghost Ranger, signing off.
Posted by Cendoo at 12:00 AM