It is happening within the next month, the 44th Super Sentai. First of all, it is nice to see that that rumors of Ryusoulger being the final season are untrue, but the actual status of Super Sentai is uncertain. But, I'm not here to talk about marketing, I'm here to give my quick take on this upcoming incarnation. So, click "here more" if you care to listen.

So far, we know the theme will be some combination of vehicles and gemstones that involve a princess from another land. Basically, a hybrid of fantasy and technology. Also, the bad guys are out to steal people's hopes and radiance. So, I can already predict the cheesy factory. However, the writers are attempting to capitalize on the current "gems" craze they believe is going on and are claiming this to be the most "sparkling Super Sentai ever" so, at least we know that it won't take itself too seriously. I must say, they are probably right about shiny rocks being the hottest thing right now. Now everyone will think we ripped them off. x.x 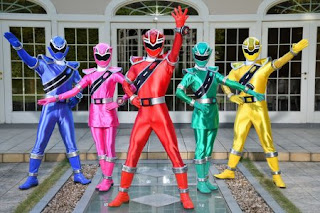 The costumes are nice and simple that go back to the original 5 team color scheme. With the obvious difference being a Green girl and Yellow boy, which is a nice change of pace. (Yes, I know Kyuranger had the first proper female green.) Overall, I'm excited to see something a little more basic. Ryusoulger tried a little to hard to be like Kyoryuger and the past few seasons before that one were gimmicks. I am all for trying new things, but it's also important to not forget what works. So, until March, all we can do is hope this will be good.
Posted by Cendoo at 9:49 PM