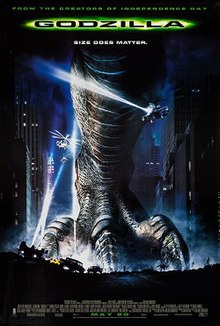 Godzilla is without a doubt the most famous movie monster of all time. With a consistent film release since his premiere in 1954's Godzilla. The nuclear powered dinosaur has appeared in 35 feature films and numerous television shows and comic books. And while the current iteration of the "King of the Monsters", produced by Legendary Pictures, has reintroduced Japan's most famous kaiju to American audiences, there was an earlier attempt to reimagine Godzilla for American audiences.

In the wake of films like Jurassic Park, with its groundbreaking use of CGI, there was a proliferation of CG-heavy monster and disaster movies that characterized the "Dark Age of Cinema". Big of effects, but oftentimes light on story, this period would see Godzilla return with a controversial new-look but a surprisingly familiar story.

But maybe a little too familiar.

From the directorial mind behind Independence Day, 1998's Godzilla would be the film that killed Godzilla to the majority of western audiences for nearly a decade. Despite a magnificent marketing campaign, the lack of original story, compelling characters, and effects that failed to wow due to their sheer ubiquity during this period of blockbuster cinema left Godzilla a dull, plodding, and even mean-spirited mess that is still mocked to this day in the US and especially Japan.

Following years of nuclear testing, a marine iguana is irradiated and becomes a massive predator known as "Godzilla". After attacks on shipping vessels around the world, the US Government, fearful of it striking land, hire Dr. Niko Tatopoulos (played by Matthew Broderick) to study the evidence left behind in order to discover what Godzilla is.

But when Godzilla decides to make its home in New York, Tatopoulos must team up with his old flame, the wanna-be reporter Audrey Timmonds, and her friends to stop Godzilla before New York is destroyed.

But military ineptitude against the monster, political infighting, a mysterious French element in the background, and a terrifying secret that Niko discovers could put all of the planet at risk of being overrun by Godzilla.

I love kaiju films. I love Godzilla, Mothra, King Ghidorah, Rodan, King Kong. All of those massive, city-destroying monsters are just a thrill to watch and the subtext behind so many of these monsters, in the wake of the nuclear age makes watching them a thrill and cerebral activity in their own right.

So what the fuck happened here!?

How did such a notorious movie monster get saddled with this dry, by the numbers, disaster movie whose story would barely make the Syfy Channel? While I will admit that there are a few moments that are enjoyable to watch for spectacle or humor. On the whole, this film just seems rote and dry. The blame, I feel, falls largely to Roland Emmerich. When you follow his oeuvre, you witness an individual big on show, not much on brain. And when he does focus on more cerebral stories, he is obsessed with conspiracy theory (alien abduction, anti-Stratfordianism, etc.).

And with Godzilla, it seems Emmerich was so obsessed with making an improved and unique Godzilla, he forgot to make a real Godzilla.

On the surface, it would seem that Godzilla's visual effects and CG should be technically better than that of Jurassic Park. After all, 5 years of technological advancement, an incredible budget, all on top of being released at the height of CG blockbusters should mean that Godzilla is an absolutely incredible visual marvel, right?

If that were the case, why does Jurassic Park still look miles better than Godzilla?

I'm going to be completely honest. While some of the practical effects look pretty good (Roland Emmerich can do some things right), the vast majority of the CG effects, especially Godzilla and its babies just look terrible.


Everything is so shiny and artificial looking. At no point do you ever buy that this creature is truly in front of us. They try to mask with rain and the dark, much like the famous T-Rex scene in Jurassic Park, but it comes off much like a 3rd grader playing a recorder right after the world's greatest clarinetist just performed.

You just end up feeling bad for the poor bastard.

In summation, this entire film just seems uninspired from a visual perspective. While it certainly has the occasional good effect, none of it has aged incredibly well (except the practical effects) and it just seems like its there to be grand and because that was what was expected from "blockbusters" at the time of this film's release.

I for one am rather glad that audiences got tired of mindless cheap CGI fests back in the early 2000s. Unfortunately, that doesn't make this one any better.

Going to be completely honest. Out of all the sections that I work on in these reviews, rating and critiquing the soundtrack and music has to be the most difficult and trying for me. This is largely because so many soundtracks in bad films are either the best part or largely unremarkable, and somehow Godzilla manages to be both.

The soundtrack was composed by David Arnold, who is responsible for the soundtracks for Stargate, Independence Day, The World Is Not Enough (alongside 4 other Bond films),  and the Sherlock TV show. Suffice it to say, Arnold is a talented composer and the music is rather good from a tevhnival standpoint. It manages to merge a feeling of the original Godzilla music, which is iconic, with something that sounds like it is right out of Independence Day.

Where I feel this soundtrack fails though is that it doesn't seem to really contribute all that much to the movie as a whole, save for a few very specific moments (the reveal of Madison Square Garden and the Death of Godzilla scene), and this leaves the soundtrack as largely forgettable.

Soundtracks work best when they enhance the scenes they are used in. When you remember the scene, you remember the music. Whenever I think of scenes from Lord of the Rings, my mind can picture not only the scene being acted out but the music that accompanies it. My memories of the Shire come attached with that iconic Shire score. The fields of Rohan have the Rohirrim music. Because both the film and soundtrack are memorable for Lord of the Rings, I can remember both visually.

This doesn't happen in Godzilla. I can't recall a single scene and what music was attached to it, except maybe the final Godzilla death scene. This is not to say the music was bad (it is often considered the best part of the movie) it just ends up unmemorable because it is attached to an unmemorable movie, which results in an overall impression of a soundtrack that is technically above average but unremarkable in all other regards.

Whatever you say about Roland Emmerich's movies with regards to spectacle, one cannot deny that characters have always been his particular weak spot and Godzilla is no different. In movies like Independence Day, the characters were are incredibly simple or reductive stereotypes and archetypes. You had slimy politicians, the irascible Jewish father, the effeminate gay man, the suave cool black guy. And while Independence Day had actors who had the personality and charisma (especially Will Smith) to cut through those stereotypes and leave an enjoyable and memorable impression, Godzilla just doesn't.


I'm not saying individuals like Matthew Broderick, who play Niko Tatopoulos, or Hank Azaria aren't good actors. Roles like Ferris Bueller and The Simpsons clearly show skill and talent of both actors. It just seems that Roland Emmerich was unable to get that personality and talent out of them in this film. It's very much like Hayden Christensen in the Star Wars franchise. A good actor's performance can be ruined if they don't have a good cohesion with the director or the director can't work with them for the best performance.

Plus, some of the characters come off as completely mean-spirited. Many are aware that the New York mayor in Godzilla is based off of famous film critic Roger Ebert, who was notoriously critical of Roland Emmerich's work. The fact that Emmerich took such a beloved franchise and utilized it to try and snub a critic speaks to me as something rather petty and pointless, and really drags down the film.

The original story of Godzilla is about a massive prehistoric animal that is mutated and awakened by nuclear fallout that goes on a rampage in human society. In its subsequent film, the titular monster fights a gigantic moth god, a three-headed alien dragon, a metal version of itself, and King Kong. Suffice to say, there is a certain level of absurdity and ridiculousness that one can expect in their Godzilla movie.

So how in the world did Emmerich manage to make something even more ridiculous and difficult to buy than that? There is a certain degree of suspension of disbelief that a story must utilize in order to fully commit an audience to its world. When you run an absurd concept, audiences generally give you a greater suspension because the concept is inherently absurd compared to a more grounded and realistic story.

And this is where Godzilla runs into an issue.

It seems strange but so much of this film expresses the intention on Emmerich's part to ground the Godzilla mythos in reality. The look of "Zilla" looks nothing like the original, ostensibly to make it seem more like a realistic looking dinosaur. And yet as a result of trying to be realistic, Zilla loses all of the pathos and ambience that is so essential to the Godzilla character. Coupled with a B-story about Godzilla babies that exists only so they can rip off the climax of Jurassic Park and push a real awkward and un-charismatic romance between Audrey and Nick.

And one element that I feel absolutely tears this film apart is the lack of stakes. New York City, one of the largest and most powerful cities in the world is being torn up by a massive monster, and I don't give a damn. We never really see the pain and torment of Godzilla's attack. The original 50s Godzilla took every opportunity not showing the monster to share the pain and suffering that the creature caused. We empathized with the people and shared their desire to see the monster put down. This film wants us to both pity the creature as just a simple animal, and also cheer for its destruction. It can't make up its mind what Godzilla is supposed to be and as result, Godzilla ends up meaning nothing except pointless destruction.

I feel like this story maybe could've been better if it had started from a more stable premise, had utilized its characters more effectively (including making them enjoyable to watch), and put greater stakes through the film. But it didn't and it is all the worse for it.

This is not a Godzilla movie. In fact, it is so unlike a Godzilla movie that Toho, the company that owns the Godzilla property, bought the Godzilla (1998) film rights (including the monster) just to classify the associated monster as "Zilla" and to destroy it in a battle against the real Godzilla. This film is notorious in the Godzilla fan community for being a below average monster movie and a terrible Godzilla film.

I have a few laughs and exciting moments, but there is just too much nonsense and unexpected slowness for me to give this film anything than a below average, and that is almost exclusively to the visuals (which have not aged well) and the soundtrack (which is great in isolation).