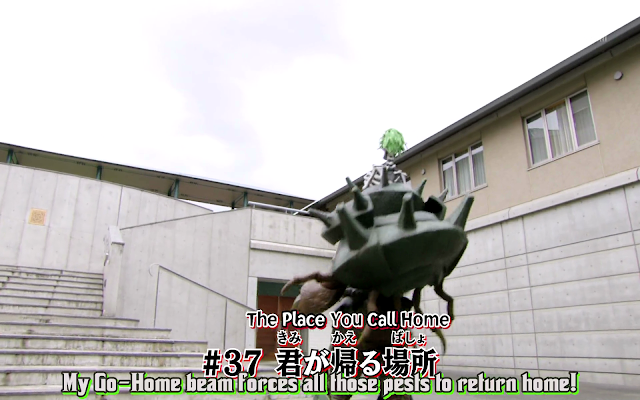 Thirty seventh episode time. These could be the last chances to for any filler or establishment so let's see what is in store.

Wasting no time, the episode begins with people running away from a new Gangler.

He looks throw away.

The Lupinrangers show up to engage and the Patrangers arrive shortly after. Lupin Red quickly pulls out his Lupin Magnum gun and rapidly makes short work of this fight. However, Yadoga reveals the power of his collection piece, a little wormhole like attack. 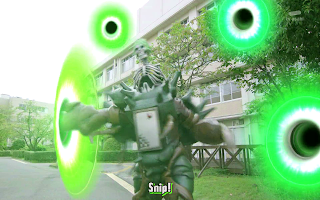 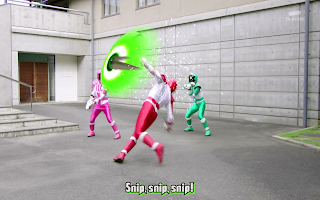 The Patrangers all took a hit and went down; the Lupinrangers all dodged the attack thanks to the warning they recieved about this power. However, a larger wormhole attack sends all 6 rangers flying back to their respective homes. Cut to intro!

One theme song later, it is revealed that Kairi is immune to the go home beam as he is still at the battle field and another hit from the beam did nothing to him. Tooma pieces together that this was because Kairi doesn't have a home to go back to and both teams come to the conclusion that they need to camp at the battlefield in order to stay in the action. What logic is that beam functioning on?

Keiichiro, determined to see the fight through, moves out of his apartment so that a tent will be his home. Determination with poor planning ahead. He arrives at the same camping ground that Tooma and Umika have set up camp at.

Keiichiro tries to ask Tooma about Kairi because he has always suspected Kairi was hiding a dark side. Tooma refuses to talk and suggests Keiichiro confront Kairi himself, which he does immediately by arriving at the restaurant where Kairi is all alone. 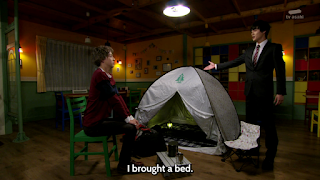 The dedication from these cops is hilarious sometimes.

Keiichiro tries desperately to reach out to Kairi, but Kairi once again sees the similarities between Keiichiro and his lost brother and pushes him away both figuratively and literally. This was the last thing Kairi did with his brother before he was lost which hit him hard.

The next morning, Keiichiro has left but leaves a note promising to return at night again to the annoyance of the Lupinrangers. However, after Tsukasa tells Keiichiro about Kairi's older brother, he begins to have second thoughts about confronting him.

Yadoga returns and the 4 Patrangers arrive first to confront them. Their turn to get a role call and pose. Keiichiro carries his tent on his back which makes the go home beam not work on him. The Lupinrangers not long after, but Noël Takao tells them not to get involved and just leave things to him. Why is he always absent from the opening fights? 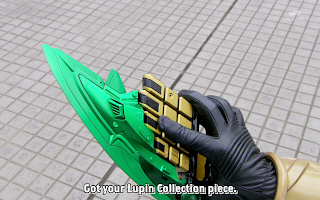 The monster turns giant but Keiichiro is too exhausted to deploy so Noël Takao goes alone. However, Kairi decides he wants to combine with the police to form Good Feeling Kaiser VSX again. 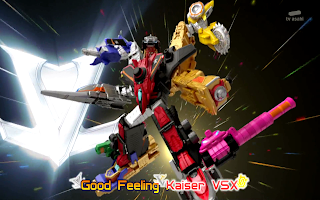 Kairi had a personal reason for wanting to do this that wasn't stated. Personally, I think the marketing team worried it had been too long since they showed this combination.

Yadoga is no match at all for this combination and is completely overwhelmed in this fight.

The episode ends with the Patrangers visiting the Lupinranger's bistro where Kairi hints to Keiichiro that he doesn't like him but Keiichiro decides he is going to continue watching over him. The End!

This episode had its strong moments, but was overall just okay. The villain was never properly introduced and the foot soldiers were extra useless in this episode, yet there still wasn't anything critically wrong either. Other than furthering the Red and Red relationship, nothing was really gained from this episode, almost making it filler. Overall, not a bad episode, but nothing missed from skipping it. 3/5
Posted by Cendoo at 1:37 AM