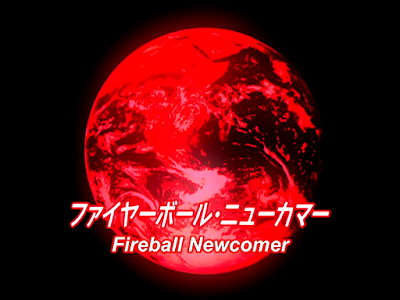 SPD Emergency! Or rather, Emergency, Dekaranger! Yup, the Special Police Dekarangers is our next Sentai to look at. Special Investigation Taskforce DetectiveRanger. I loved the Power Rangers incarnation Power Rangers SPD and have always been curious about its origins. So, with expectations are a bit high, go ahead and click on "read more" for my full coverage. 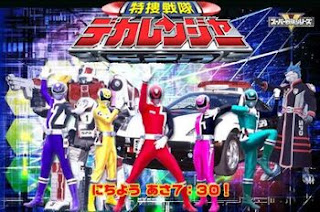 The episode wastes no time with exposition or set-up and jumps straight into the action with a car chase involving DekaRed and a criminal on Planet Chanbeena.

This car chase quickly gets out of hand. Lasers are fired, DekaRed accidentally drives through a wedding, and even though he ultimately does run the criminal off the road, he almost drives off a broken bridge.

This was pretty exciting. Especially since there was no CG for the special effects.

DekaRed, who we finally learn is named Banban, or Ban, actually ignored orders in this chase and is almost fired, however he actually lands the job of detective for the Earth Branch. Dumb luck or something fishy is going on. Cut to into!

So, not just a police theme but a detective theme. That should have been obvious from the name, if I knew what it translated too earlier. This is actually a pretty strong beginning.

One theme song later, we see a bunch of police and detectives gathering around a hostage situation. Everything is a pretty serious tone, until you actually see what is happening. 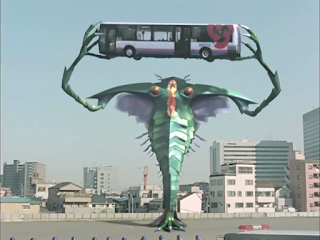 And, there's the CG!

These criminals will be this seasons monster of the week, they're called Alienizers. Seriously? At this point, the Dekarangers get summoned and we get to see the procedure for the citizens. 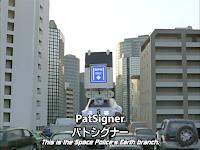 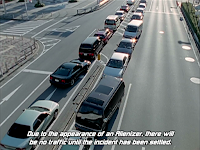 The cars all move to the center lane and the Dekaranger's Zords Dekamachines drive or fly right over them. I love it when the rest of the world is taken into account. One by one, the 4 Dekamachines are introduced, all but red. PatGyro, PatTrailer, PatArmor, and PatSigner. Looking back, the Patrangers would be proud.

DekaBlue, DekaGreen, and DekaYellow all hop out and assess the situation. DekaYellow uses her lisence to translate what the Alienizer is saying. However, Umeko, DekaPink, is on the bus with the hostages. Could it be that she jumped right into action in fear for the hostages safety? 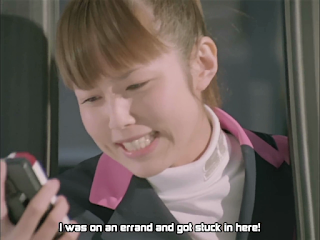 Silly Pink got stuck in the bus along with the civilian hostages. Why didn't she report in and how come no one noticed her absence until now?

Umeko attempts to keep the hostages calm (by singing) while the other Dekarangers add the monster to the Pan Space Crime File and come up with a plan. 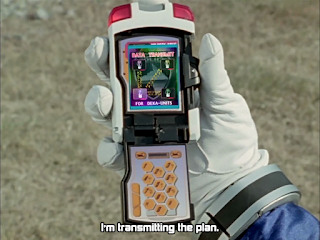 A shame they never used this mode in Power Rangers.

With a fast acting plan involving blinding lights, lasers to the feet, and a big lasso, the Dekarangers capture this Alienizer earning their first "case complete". The monster cries.

The Dekarangers return to their base, DekaBase. These names are brilliant. At this point, some animation is used to introduce the remaining 4 rangers, which means the time probably right for the Ranger Roll Call. Banban, nicknamed Ban - DekaRed. The hotshot rookie who acts aggressively and somewhat chaotic but is massively loyal and friendly. Just like a Shonen protagonist. 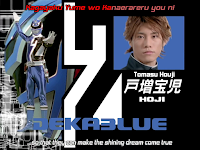 Houji Tomasu, nicknamed Hoji - DekaBlue. The second in command who has a clashing personality with Ban which results in bickering. Calm, calculating, yet cold who does not like to take orders but has a secret big heart. Also excels in sniping. A classic Shonen rival. 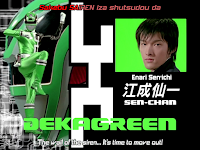 Senichi Enari, nicknamed Sen or Sen-chan - DekaGreen. The age old story of someone born in poverty with a lot of siblings. He is the brains of the team and has a "thinking pose" where he hangs upside down. Held back by his fear of the dark and claustrophobia after falling in a well as a kid. Kind of like the comic relief character, but with more depth. Also, totally not Magis. 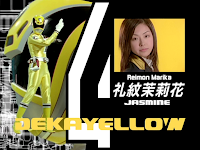 Marika Reimon, nicknamed Jasmine - DekaYellow. Has ESP, the psychic of the team and can understand the enemies alien language. She can get impressions of targets by touching objects they've handled or by visiting places they've been too. Also, wears gloves to suppress her powers when they aren't needed because over using them can leaver her exhausted. Ironically, that means she has a similar story as Bridge the Green Power Ranger counterpart. Very close friends with Umeko. 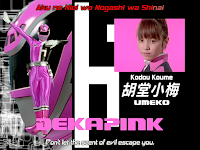 Koume Kodou, nicknamed Umeko - DekaPink. Has a strong heart and is always full of perk, someone who can bring the team together and keep people calm in a dire situation. Also, a bit of a scatterbrain who loves bubble baths to the point where she will spend as much time as possible taking one with her three rubber ducks Umeyo, Umenosuke, and Umegoro. How very pink.

Back at DekaBase, we get to see the head of the SPD Earth Branch, Anubis Seijin Doggie Kruger.

Doggie calls an emergency meeting, but Umeko snuck away to have a bubble bath. 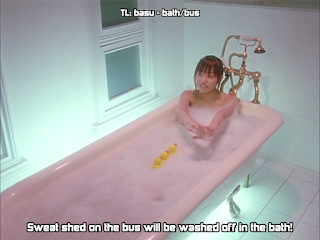 It is worth mentioning because this is going to be a running gag for her character. I would make a joke about pink bubbles but apparently that's real.

This bath is cut short as Umeko is called back to the meeting. Even though the monster is arrested, they found a mysterious object in its stomach so the case is not over yet. Good on them. Most Rangers would just blow up a monster and move on. 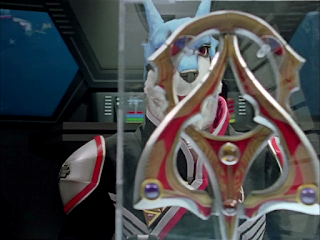 That's oddly clean looking for being fished out of a stomach.

Turns out this artifact is connected to a transmission that was intercepted. The Alienizer, or Libra, was promised something in exchange for breaching Earths defenses but was bretrayed as the one promising claimed they only care about the object in his stomach. So, now it is a case of identifying this object in order to find the person or monster on the other end of that transmission.

This plot is complex yet easy to follow. I'm impressed. Where is Ban though?

Cutting away, we get an interesting scene with a shady looking character. 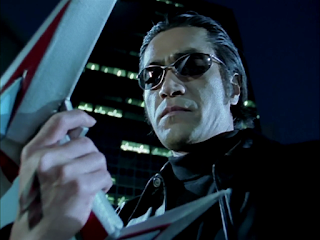 How to look suspicious 101. Dress in black, wear shades, and hold something odd looking. Like an alien gun.

This charming looking man is walking around at night and shooting cops for no apparent reason. He runs from the police and almost gets away before being hit by a truck. I have a feeling this will matter later.

She teases the giant robot by saying the robo joints aren't finished yet and questions Doggie about his bad feeling. Doggie explains that the recent series of strange crimes has given him the feeling that some larger danger is approaching Earth which is why he rushed to approve the 5th Dekaranger.

This ties the story back to Ban who is rushing towards Earth and finally reaches it after traveling six billion kilometers. That's about 3.7 billion miles. Totally believable. Sadly, Earth's barrier is still up so he is delayed. 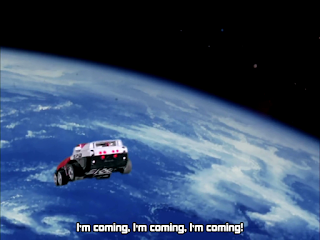 I wonder if Power Rangers In Space inspired this car driving in space bit at all.

The episode slows down a bit at this point. A narrator tells us that the 4 Dekarangers are gathering information and show some split screens of scenes. 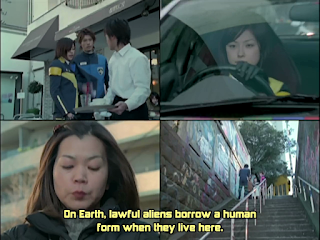 This is kind of lazy story telling.

Finally, a local street clothing salesman does identify the object as a Kaijuki (Monstrous giant machine.) Unfortunately, this salesman is gunned down by someone in a coat before he can explain. This gunner is spotted and pursed by the Dekarangers. The body count begins. 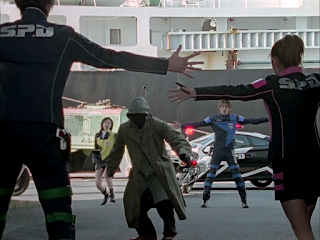 This gunner can jump very high and almost gets away, but is sniped out of the sky by Hoji while being identified as a Mecha-Human. 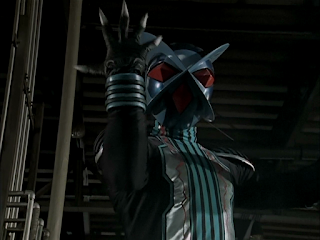 The 4 Dekarangers henshin and we are ready for the first proper Ranger battle. But first, let's break down the transformation. Actually, this time the show did it for me. 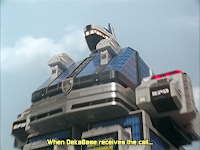 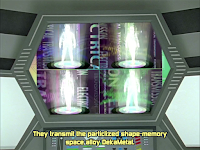 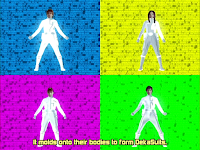 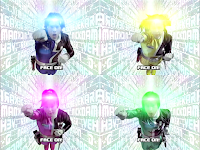 I enjoy the scientific approach over the fantasy for these seasons. But, I feel like the narrator kind of broke the excitement a little bit.

Now, the first battle begins. It plays out as one might expect, the rangers take a few hits but are overall on the winning side. This time, as Sen reminds us, they aren't trying to destroy the Mecha-Human, they are trying to arrest it alive.

They really expect that change to be shock factor to keep bringing it up. This isn't the first season to do that!

The Dekarangers are doing fine until the Mecha-Human throws some balls that turn into this seasons foot-soldiers; which are also called Mech-Humans. 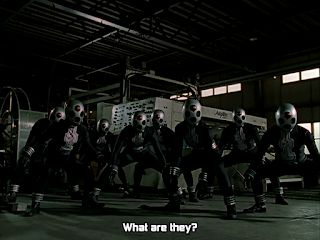 These robot like things aren't much of a threat, but they provide a distraction for the gunner Mecha-Human to escape. What a coward. Naturally, this is the point when Ban shows up to stop the fleeing bad guy.

Got to make that red entrance strong. Even though he was already shown morphed at the beginning.

Ban drives in and uses his car's, or PatStriker's, arm extension to grab the Mecha-Human. 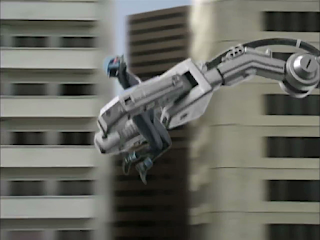 Ban runs into the fight in slow motion and gets a morphing sequence without a narrator. That's just favoritism. He is pretty enjoyable to watch fight. Naturally, he has got skill being Red, but gets careless sometimes and take hits, also has a habit of showboating and ignoring the other rangers to their annoyance. This goes a bit too far as Ban destroys the Mecha-Human instead of capturing it, possibly ruining the case which causes tension with the other Rangers especially Hoji whom gets in a fist fight with Ban. In Ban's defense, he was only following tradition.  However, hope for the case is not lost thanks to Sen. He may be able to salvage the answers from the Mecha-Humans remains.

At this point, our friend in black from earlier wakes up from inside the Police Headquarters with a jump scare face. 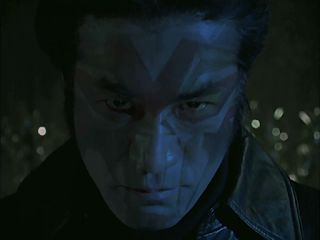 He does something that causes the barrier around Earth to be opened which allows a bunch of mysterious ships to land on Earth, possibly an invasion. The episode ends with the 5 Dekarangers running towards the scene to find out what happened. CLIFFHANGER!

Side note: During the credits the the DekaRangers give a tour of their base which is a nice way to get that out of the way. Although, the slow jazz credits song didn't really fit.

This episode was better than I thought it would be. The action was fun, the characters were introduced quickly and efficiently while all showing enough personality to get attached, and the writing was very well paced. There were a couple of issues, like how it never explains how Ban already had his powers and Patmachine before getting the detective job, how he got past the Earth barrier, and how he knew where the other rangers were. Also, the main villains were not established, which is fine for the cliffhanger ending, but the Alienizers that were established weren't explained at all. Are they the main threat or are just some of them bad? That salesman who was killed turned into an alien before disappearing.

Overall, I am genuinely impressed by this first episode and can see myself getting really into this season. 4/5
Posted by Cendoo at 12:00 AM