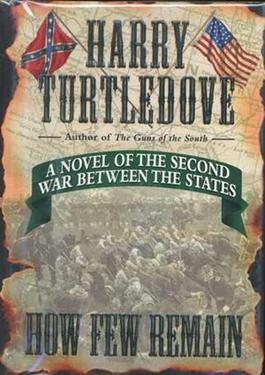 The Timeline-191 or Southern Victory is perhaps the most famous and best-selling alternate history series of all time. Detailing a period of 60 years, from 1862 to 1945, over a series of eleven novels. The timeline follows a world where the Confederate States of America avoided the Battle of Antietam and went on to be victorious in the American Civil War, securing their independence.

While I would eventually like to cover every single story in the series with similar reviews (much like I would like to do with the Ring of Fire series), I believe that covering the first book How Few Remain, which is fairly isolated from the rest of the series and can act very much like a standalone story, is a great way to hopefully introduce more people into this classic of alternate history.

With that out of the way, let's take a look at Harry Turtledove's How Few Remain, released in 1997.

Harry Turtledove has become the standard-bearer for the alternate history genre. For all my love of the work of Eric Flint, one cannot ignore that Turtledove has been far more prolific and influential, especially as a result of the Timeline-191 series.

Though the novel begins at the POD (that is Point of Divergence, where the timeline has shifted) in 1862, it quickly shifts to the mid-1880s. The United States and the Confederate States have been in a state of perpetual cold war, threatening war and bothering the other side. For the majority of the 20 years following the war, the Democratic United States presidents have attempted to keep the peace, despite many war hawks and anti-Confederate sympathizers in the government. When the Confederacy purchases land from Mexico to give themselves access to the Pacific Ocean, however, the newly elected Republican President uses the incident as an impetus for war with the Confederacy, beginning the Second Mexican War.

Alongside this primary story arc, we see a young Theodore Roosevelt rising to prominence against British-Canadian forces, an uprising in Utah between Mormons and Union forces (the most historically ridiculous aspect of the entire story), and the former President Abraham Lincoln joining forces with notable historical reformers to create a new political party. These stories help to not only flesh out the culture of this alternate America and expand the story, but these elements will play a fundamental role in the later books in the series.

And it is this element that sometimes makes this book annoying to read. At some levels, this book seems to want to be fairly self-contained. And yet, this book also possesses some elements which do not fully coalesce or resolve until several books down the line. It leaves the book sometimes unfulfilling, especially given how interesting the introduced and potential impacts might be (which get left unexplored in real time as the next book in the series skips another 20 years). I do admit that much of this is present in a lot of Turtledove's work, which is perhaps why I have always preferred the work of Eric Flint, especially his Ring of Fire series.

But so much of this series is in the detail and I do recommend taking a look at the entire series, so my issues with its stand-aloneness of this single novel isn't really all that critical to me as much as the massive time jumps and focus on "Great Man History" that is so essential to so much of Turtledove's work. In that, I will take points away.

But that aside, How Few Remain is still a deeply influential piece of alternate history literature, I would even go so far as to compare its influence to that of The Lord of the Rings and fantasy. While I perhaps have hardened to it (in large part due to my own research and work on my own alternate Civil War history) and prefer some of Turtledove's other work (which I will cover), I can no more reject its influence on the genre and will still classify it as a must read of alternate history, along with the rest of the Timeline-191 series.