Red Diamond back again with another game review. This game is actually a former flash game now free to play steam that I wanted to review after already covering its' sequel Castle Woodwarf 2. Probably the wrong way to check out a series, regardless, click "read more" for my review.

The story of this game can be shown completely from one screenshot. 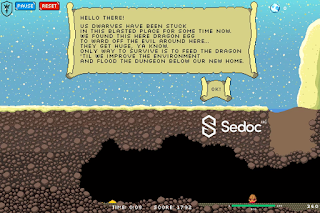 To sum the story up, Gwarves are feeding a dragon so that it will protect them while they improve their land. A very simple plot for a very simple game.

Game play is a one screen/high score style of game that gradually speeds up. Typical for flash games meant to be played without saving. 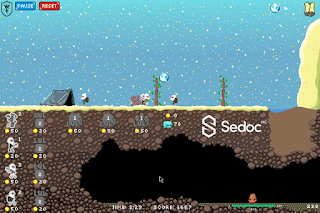 There are 3 collectibles and 7 things that can be upgraded. Three Dwarfs and 1 tree all have 2 types of upgrades, one to increase their efficiency and one that increases their quantity. Trees are needed to collect gold to buy upgrades, but they need to be cut down by lumberjack Dwarfs. Fish are used as this games life bar, once you run out of fish the game is over. Fishermen Dwarfs can spawn in fish, and the last Dwarf are gather up the fish and wood in order for them to be collected and sold. The other 3 upgrades are the Dragon, the home, and the environment. Improving the home allows wood to sell for more gold, the environment upgrades improve the quality and quantity of resources as well as unlock plants that auto generate gold, and the Dragon upgrades make the Dragon stronger for when enemies attack in the cave below. 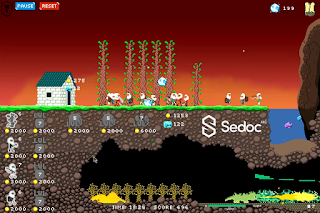 The monster attacks are the other main objective. After a set amount of time, monsters will spawn in the cave and the Dragon needs to be strong enough from upgrades to defeat the monsters or game over. However, the stronger the Dragon is the more fish it requires which means the player needs to be careful on how they spend their gold or what to prioritize in.

Finally, there are the blue eggs. These eggs are an extra collectible that is used to purchase additional characters or handicaps from the start up menu. 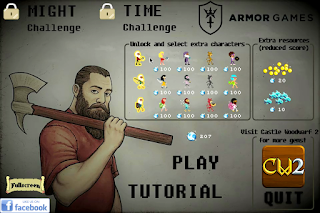 All 3 Dwarf classes have different characters to unlock, but every form functions the same. The only differences are the character models, the grunts they make, and the animations they use. For example, the base Dwarves will use a tools, but the magic incarnations will use spells.

This is a nice touch to encourage replay, but only really serves the purpose of showing off.

The opening bit explaining the story is fully voiced and done pretty well. Other than that, there is not much to talk about in the audio department. Every Dwarf and the Dragon have stock grunts and sound effects and their is only one music track playing during game play. This one track sounds like a generic fantasy tune that does fit pretty well, but will Déjà vu. Nothing is bad, just bare minimum which is to be expected from free-ware.

As mentioned before, there is only one stage, but it is nicely colored and detailed and changes with upgrades which is a nice effect. The Dwarfs are small with minimal detail and the Dragon slowly looks more threatening as it grows.

The best way I can think to describe the visuals is, they don't impress but they satisfy. Nothing is wrong, but dated.

Castle Woodwarf is a very cool and addictive game. Granted, it is very dated and might not do much for modern audiences, especially compared to its sequel. However, it has the advantage of being free. I would recommend this title more on mobile devices over the Steam port because of how simple it is and may the Dwarfs prosper.