Green Phoenix - How a Realist Hero Rebuilt the Kingdom Review 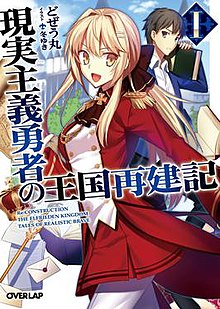 As I have stated in the past, my appetite for anime can be very picky and distinctive, preferring light-hearted slice of life and romance stories to the more dramatic or dark stories that tend to become the main stays of anime seasons. I will gladly take a That Time I Got Reincarnated as a Slime or Restaurant to Another World to Attack on Titan anytime.

And among this list, I tend to find isekai's a surprisingly enjoyable affair, even if I do think some of them tend to come out a bit rote and tropy. Just the degree of fun of a fantasy setting, chance for silly romance moments from a harem anime, and the introduction of modern world elements to lend a degree of science fiction to the whole mix really brings me a tremendous amount of joy.

So it should come to know surprise that I found myself drawn to How a Realist Hero Rebuilt the Kingdom. I was drawn to the anime due to its focus on modern technologies and political intrigue, utilizing a grounded sense of actual political acumen in our main character  rather than overwhelming magical powers granted through sheer dumb luck. But was this an accurate approximation of what we as the audience were sold. With both Part 1 and Part 2 of this show now finished, the question now arises. Was How a Realist Hero Rebuilt the Kingdom good or was it just another one of the cookie cut-out generic isekai.

Could there be something more?

Kazuya Souma is a college student studying to become a prospective governmental employee when he is suddenly summoned to the magical Kingdom of Elfrieden. Initially believing that he was summoned to be a hero to defeat the Domain of the Demon Lord, Kazuya soon finds himself drawn into the political situation in Elfrieden, as the nation is struggling with a nationwide famine, economic depressions, and rampant governmental corruption.
Now declared the King, following his predecessors abdication, Kazuya will have to work with his reluctant fiance, the Princess, to bring about modern reforms and save Elfrieden from all threats, both outside of the country and within.
***

In many ways, How a Realist Hero Rebuilt the Kingdom is a frustratingly average isekai story, filled with many of the usual tropes and expected narrative beats that have become characteristic of the genre. The latter half is especially given to some of these more tropy elements, what with its larger focus on the harem aspect of the isekai formula.
Thankfully, the narrative does approach a comparatively fresh angle by focusing all these elements through the lens of pragmatic politics. While we as the audience are actually given the opportunity to understand why all these girls would be interested in and attracted to Kazuya. Because most isekai succeed or fail on the part of their MC, and Kazuya is actually a rather refreshing take on the formula. He isn't blessed with particularly powerful magical abilities beyond a minor ability to animate objects to do his bidding (for which he spends most of his energy using them to help write out paperwork). No, the anime focuses on what its actually quite good at, world-building and realistic political and societal reforms and discussions that ground it in reality and make our heroes struggle seem all the more noble.
This story focuses on rather dark subject matter at times, including slavery, political corruption, crime and racism. But the story also respects its audience enough to never lighten these subjects nor use their horror for shock value or worse, titillation (looking at you, Episode 1 of Goblin Slayer). The story discusses these things while remaining refreshingly PG-13, and I think it is all the better for it. Also, while there are moments of war and battle, they play a backseat to the real arena of combat, political negotiations and diplomacy.
Kazuya is a particular gifted character in terms of understanding political bureaucracy, and he takes that knowledge and uses it to great effect throughout the story. We see constantly the paths that he is taking and he always logically explains to Princess Liscia his reasons and thoughts, never allowing the simple assumption of correctness to make the character seem overly confident. It really helps you to like this character and through his Holmes/Watson-style relationship with Liscia, it gets you invested in their burgeoning relationship. And the character interactions are a vital and important element of the story, as Kazuya is defined as a character by his relationship to his newly earned kingdom and the citizens and family he makes along the way.
As much as I love the more military and serious political moments, I think my favorite parts are the little ways that Kazuya brings the modern world or modern sensibilities to this fantasy world. My favorite moments probably being the cooking scenes with Poncho, as the addition of modern food and cooking methods is something that I am deeply drawn to in science fiction, time travel stories, isekais, and alternate history stories. And Poncho is just one element of showing how fun of a cast this isekai has.
While the latter half of the anime does have a lot more traditional elements of isekai, with the promise of even more tropes down the line should a second season be produced, the anime is ultimately a success based upon its strong world-building, large well-developed and complex cast, and a grounding in pragmatic solutions that don't just push solutions out of thin air. It gives what might otherwise be an utterly average anime a sense of genuine weight and serious, while still maintaining the proper balance of humor.
How a Realist Hero Rebuilt the Kingdom was a pleasure to watch and I found myself thrilled to turn on Funimation once a week to see it, even if the final episodes came out right as Funimation was being absorbed into CrunchyRoll. I do hope the series will continue in the future, but even if it doesn't I was left happily satisfied with a thoroughly entertaining above average anime.  It isn't revolutionary and it won't likely reach the annals of anime history, but not everything needs to be extraordinary, just good enough.
VISUALS
SOUNDTRACK
CHARACTERS
STORY