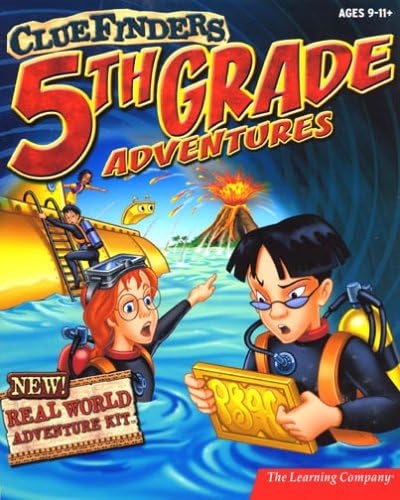 Over the last few months, I have periodically been releasing minor retrospectives on the ClueFinders educational video game series that I and my sister grew up playing throughout elementary and middle school. In the past, I have examined 3rd Grade - The Mystery of Mathra and 4th Grade - Puzzle of the Pyramid. I found these games enjoyable to watch with a fun, if a little silly, story and premise that I think really works for the purposes of presenting good educational gameplay.

However, I never actually grew up with these two games, and was instead made aware of them from my younger schoolmates and friends, who would let me play them when I was at their home (Yes, I understand how dorky it is to play educational games at a friends house, but I also played Hearts of Iron 2 with one of my neighbors dads' as a kid so you can suck it; I do what I want).

Today's retrospective will cover the first actual game in the franchise that I ever owned, 5th Grade Adventures - Secret of the Living Volcano. And let me tell you, the story behind this one is really weird but also to my memory quite enjoyable and engaging. Even if the twist is a little out there compared to the rest of the franchise.

***
ClueFinders 5th Grade Adventures is in all honesty my favorite game in the ClueFinders franchise. It is the one for which I have the fondest memories and the one that I found myself drawn into the story far easier than all of the others. Our story once again follows the titular ClueFinders, a gang of four elementary school children that work together to solve strange and supernatural events and mysteries all around the world. The gang is made up of Joni, the leader of the ClueFinders, Santiago, the resident tech-head, Owen, the laid-back skater kid, and Leslie, the teams' resident researcher and genius.
In The Secret of the Living Volcano, the ClueFinders find themselves shipwrecked and separated on a mysterious island while traveling on Leslie's grandfathers' ship, which is suddenly struck by an unexplained tsunami. Joni and Santiago find themselves washed up on a beach alongside their robotic assistant Claptrap, while Leslie and Owen are apparently trapped in a strange underground cave. In order for the two pairs to meet up and find a way off the island, Joni and Santiago will have to collect strange metallic tiles known as "CrypTiles" by assisting the other various castaways on an island that seems to be alive...and hungry.
The underlying mystery is actually pretty well established and, much like past games, the island can be divided into two areas which must both be completed before the final area is unlocked. The first area is the underwater stage, where the ClueFinders must solve various mathematics and engineering problems and games to unlock an underground passage to "Inside", the area that Leslie and Owen are apparently trapped. The second area is the surface, where you assist various different human castaways (as opposed to the underwater world's intelligent sea life) in tasks more related to reading comprehension and logic puzzles.
Upon finishing both outer areas, "Inside" is where the resolution of the mystery comes about, which I won't spoil here. Only saying that this segment focuses on spelling puzzles and a rather fascinating and intriguing biology game that focuses on the relationship between predator and prey populations within any environment. It's a complex topic for a game designed for 4th graders entering into the 5th, but I think that's what I've always respected about ClueFinders.
This franchise deeply respects its core audience. And while things like the animation were absolutely dated and very primitive, even in its own time, the series also felt real and earnest. Many forms of media meant for younger audiences tends to come off as condescending, but not ClueFinders. What I think is extra interesting is the series propensities for references to other media, most of which I don't think children will really understand. Which goes to show that ClueFinders actually did come from a place of general inclusiveness and  well-meaning writing.
Above all things, this series was a lot of fun to play, if a little bit repetitive. Due to the random nature of certain CrypTiles, it was often necessary to engage in quite a bit of backtracking, if you weren't very good. In addition, some of the cutscenes for collecting CrypTiles could be long and repetitive if you weren't good at the games. I was good at the games (being quite intelligent if I do say so myself) but watching other people play can be an exercise in frustration at points.
Actually that does bring up something important. Be careful who you watch with these games on YouTube. Generally the game can be relaxing and fun, but sometimes I think that these players must've gotten booted out of grade school classes just to no longer bother the teacher. How anyone can mess up fractions and basic grammar rules is something I will never understand.
However, these are all really small potatoes. ClueFinders 5th Grade Adventures remains a ton of fun, if a bit outdated due to technology. I'm pretty sure you would have to find an emulator of some sort to be able to play in on modern systems, but it is deeply nostalgic for me. With a lot of fun games, educational honesty, and a surprisingly well-crafted narrative considering who this game was made for and the general product that is delivered to that same audience.
The Secret of the Living Volcano could've easily rested on its laurels, but it didn't. It instead decided to deliver good, intelligent content for children to play their summers away on. And there is nothing wrong with that in my book.
***
I would like to thank my monthly Patrons for their support of all of my content. You can join my Patreon for Behind-the-Scenes, Polls, and other fan interactions here.
MONTHLY PATRONS
Cendoo
Posted by The Brony Critic at 12:00 PM