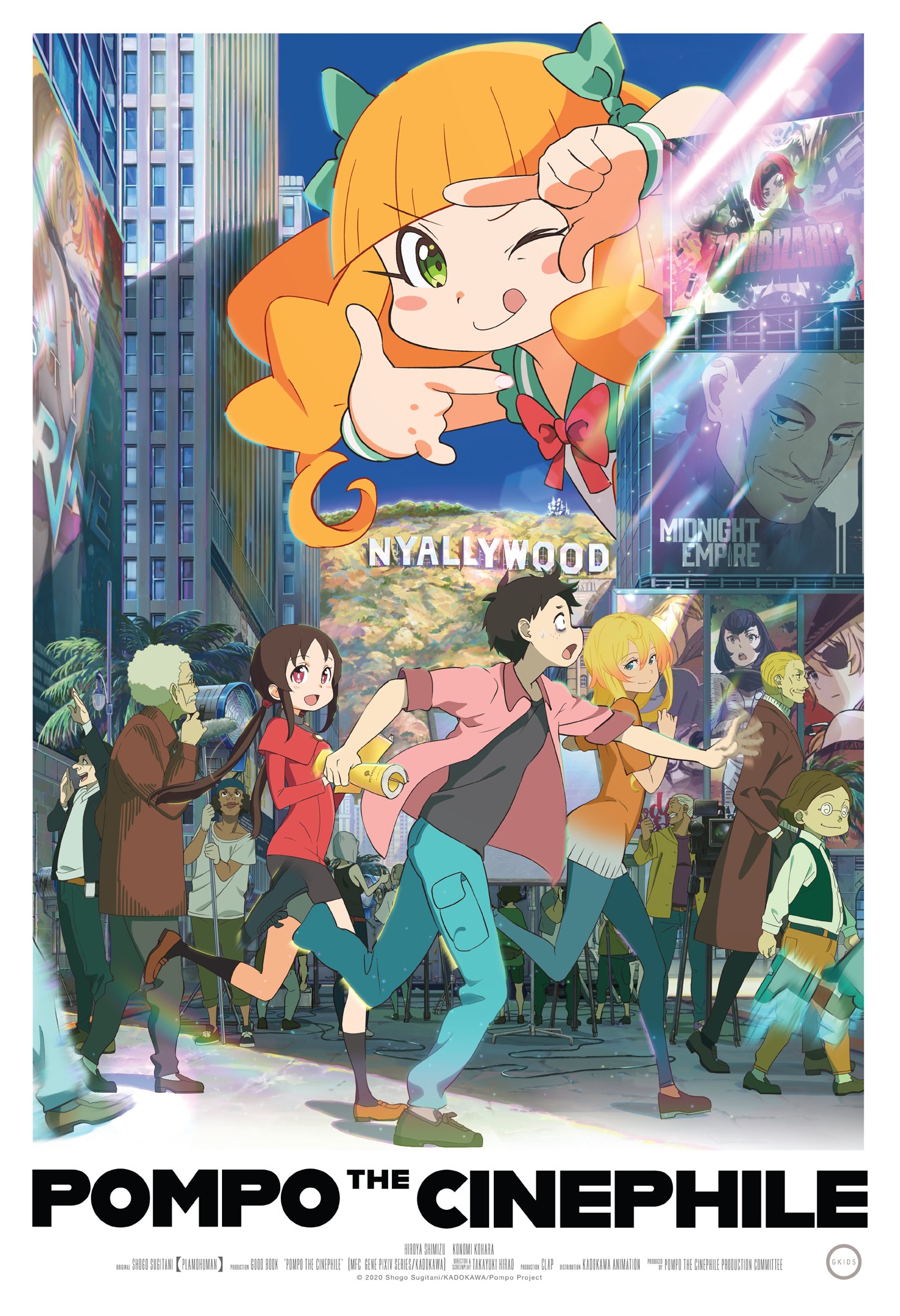 Its not often that I get an opportunity to see a limited release film, given their comparative rarity in my area (Dayton isn't exactly the hot-button region for exclusive releases in the present day). So when my sister invited me to watch a recently released dub of a highly rated anime film, I must admit that I was intrigued and excited.

The fact that this film was also covering the power of films and the filmmaking process also deeply touched my heart and made enthralled to see just how the creators would bring such a personal subject to the screen. I absolutely movies about making movies, as seen by one of my favorite films Singin' in the Rain from 1952. So it should be no surprise then that I was immediately compelled to watch Pompo the Cinéphile, based on the manga by Shogo Sugitani.

And after having watched the film last Thursday, I must admit that I am completely enraptured and utterly enchanted by a colorful, passionate piece that absolutely understands and appreciates the power of filmmaking and the importance of every single role that goes into making those films. Pompo truly understands the magic of movies and expresses that in every frame of the film.

Joelle D. Pomponette, also known as Pompo, is a prodigy movie producer in "Nyallywood," the movie-making capital of the world. Although she's known primarily for her B-movies, one day Pompo tells her movie-loving but apprehensive production assistant Gene Fini that he will direct her next script: a delicate drama about a tormented artistic genius, starring the legendary actor Martin Braddock and Natahalie Woodward, a young actress seeking her first break. But when the production heads towards chaos, can Gene rise to Pompo's challenge, and succeed as a first-time director?
***

Pompo the Cinéphile is a marvel of a film, an artistic love-letter to the craft of film-making and the power of movies to transform our daily lives. Utilizing some absolutely stunning animation, Pompo manages to tell a completely engaging and fun-filled story all within 90 minutes, a fact that they place as being of paramount importance due to the "rules" of good film production.
This adherence to the "rules" also reveals a deep level of understanding and respect that the creators possess for the craft and of the research that went into every detail represented. Everything this film talks about, I was taught or learned in film school and even more importantly than being told, the film utilizes its unique story-telling method to show the audience exactly what the rules mean. Pompo is a film that actually walks the walk, which keeps the film earnest and ultimately lighthearted.
The films crystal clear animation style is colorful and vibrant, while perfectly showing how the real world relates to the world that is going through the camera, especially revealing the sheer levels of beauty that CLAP was able to bring to landscapes and character designs. Engaging characters stories are told through beautifully structured transitions and utilize very specific camera tricks and editing styles (often explained in the film itself) to tell the story, exhibiting exceptional technical proficiency in an animated form.
All of those characters by the way, are fantastic. Pompo is less of the main character and more of the mentor figure, but it is her relationship with her assistant Gene that forms the emotional argument of this film. Gene is the actual main character, with his struggles to direct his very first film must also mesh with his growing understanding as to what this film actually means to him.
Then we have Nathalie, who longs for nothing more than to be an award-winning actress, who comes to rely on Gene and her senior actor Martin Braddock to show her the ropes, and along the way give Gene support during the editing phase. Finally our last character of note is Alan Gardner, a former classmate of Gene's who is now a jaded investment banker that must find his purpose and drive when the film Meister goes over-budget due to reshoots that Gene needs.
Each character weaves their way through this tight and poignant story that asks the question, "Why are movies so important". It is a question that I as a film critic and a filmmaker am deeply touched by and as such, I found myself enthralled at the visual representation and love for my craft on display. The fact that the film doesn't shy away from, but actually embraces, the less romantic sides of the craft (ie. financing and editing) is something I have never really seen before.
More than anything though, this film really gets the feel of filmmaking. The tingles down your spine or the electricity of filming a scene exactly as you pictured it, the struggles of making an unfriendly shooting environment work for you on the fly, the struggles between the demands of the cast, crew, and the financiers to deliver a project that lives up to all of their expectations. It was cathartic and spiritually fulfilling to witness this film, which I was even more surprised because I was somewhat hesitant to watch it due to common tropes and frustrating elements that are unfortunately common in "movie movies". This film avoids those or utilizes them in ways that are far more down to earth.
For example, the film has the high-strung professional actor that makes things stressful for the director in Martin Braddock, but the film reveals him to simply be a consummate professional who expects the best of his coworkers and works to bring that out in his performance. The drama from the film comes from the Gene's own internal struggles to understand what the film Meister means to him as a director and how his own vision and struggles can be presented in a way that is relatable to his audience; his audience being his idol Pompo herself.
Pompo the Cinéphile true beauty lies in its question as to "who we make movies for". Its capacity to capture the wonder and majesty of the creative act through stunningly vibrant character designs and editing techniques, while sticking to its own in-universe rules presented by Pompo herself makes this film an absolute treat for the eyes, ears and soul. At the end, I was completely satisfied and yet absolutely hungry to watch this film again.
When I get the opportunity to watch this film again, I will absolutely go through whatever hoops I need to. It has been a long time since a film has spoken to me on such a level, and I fear it may never happen again.
VISUALS
SOUNDTRACK
CHARACTERS
STORY