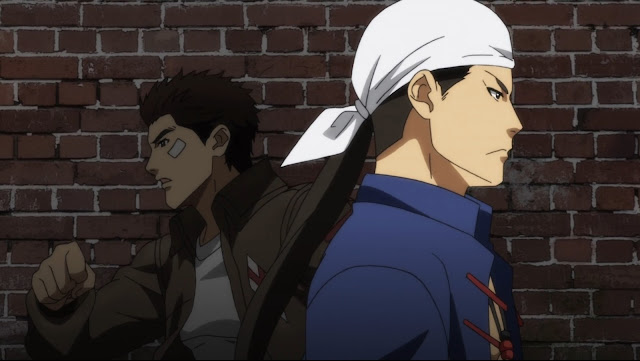 Back again as Ryo continues his quest through Hong Kong. I know from the games that this is the time when Ryo has people actively try to stop his quest for revenge. However, this anime has a smarter Ryo that is looking for not just revenge but the truth about his Father's past. So, I am very curious to know how this will play out. Click "read more" and let the analysis begin.

The episode begins with the continuation of the conversation from the last episodes credits where Master Lishao Tao reveals herself and Ryo is shocked. She tells Ryo to spar with her after guessing his doubt about a female master. Ryo does not like to fight women, but this only furthers Tao's need to prove her identity, so they spar. 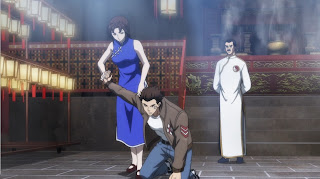 Ryo is completely outmatched, he cannot land a single hit against Lishao Tao's superior speed and Kung Fu. She pins Ryo down, showing a pressure point that she could have used to easily kill Ryo if she wanted too. Lishao Tao tells Ryo to go back to his country because she cannot offer him any help. Cut to intro!
So far, this is exactly what I expected. As a kid it was frustrating that she would not help, as an adult I get it.
One theme song later, Ryo is leaving Man Mo Temple only to be greeted by a voice mocking him for not having the skills to match the master. This is revealed to be Fangmai, Master Tao's assistant. 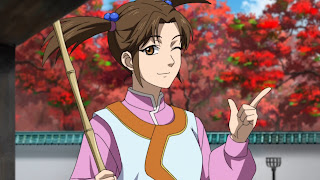 She looks so anime.
Monk Liu scolds Fangmai for being nosy and sends her off. She tells Ryo that she is confident he will return to the Temple even though Ryo seems ready to give up. That is surprising. Ryo and Liu have a conversation about the sparing match where Ryo is very humiliated for both being outmatched and for how he assumed little of Lishao Tao for being a woman. Liu tells Ryo to go to the Guang Martial Arts School because if he learns the other 4 Wude then the master might change her mind. I was hoping they would work the other 3 into this.
Upon arriving, Ryo is stopped at the door, but the master, Master Zhoushan, lets him in. 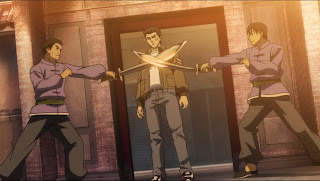 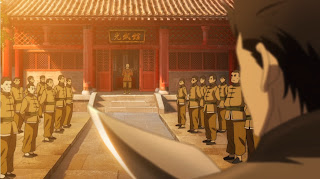 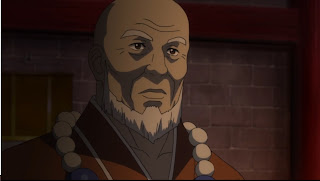 Ryo respectfully requests to learn about the Wude, but the master believes himself unworthy because he "once ruined a man's life". Thanks to a chance run in with Joy, Ryo learns of another martial artists who is a street performer at the local shopping mall. Once Ryo meets this man, he immediately demands a beer, Ryo reluctantly agrees. 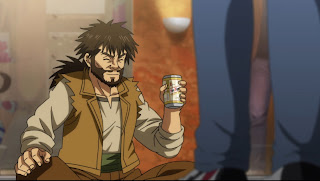 That is so accurate to how greedy some homeless people act. But, how did Ryo get a beer? He is a minor.
After this, the street performer announces to the crowd that Ryo will smash a rock for tips. Once again, Ryo reluctantly agrees. Fortunately, his martial arts are far past this level. 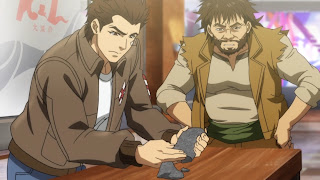 That rock looks like clay.
Ryo asks this street performer, who introduces himself as Zongquan, about the Wude, but he tells him he is unworthy. When the Zhoushan is brought up, Zongquan refers to him as "the noble master", then walks away.
Cutting away, Ren appears again to question Joy about Ryo. Joy tells Ren he can go meet Ryo himself if he wants to know and points Ren in Ryo's direction.
Ren did not know who Ryo was until later in the story in the games. It is interesting that they are giving him a bigger role.
Back at the Guang Martial arts school, Ryo has pieced together that Zongquan is the man Zhoushan was referring too. Yeah, because that wasn't obvious. Master Zhoushan reveals Zongquan's backstory, about how he was once a promising martial artist but got himself expelled because he began misusing his talents and Master Zhoushan believes he had failed him which is why he cannot bring himself to speak of the Wude. To this, Ryo heads back to the mall to find Zongquan where he is ambushed by 3 Yellow Head members looking for "protection money". 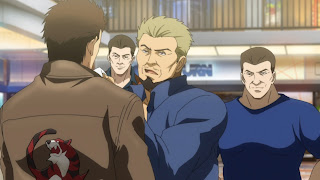 I wonder what this gang is doing out of Kowloon.
The three Yellow Heads don't stand a chance against Ryo, but Zongquan still shows up from the bathroom to help and bring Ryo out of that fight. While fleeing from the mall, Ryo just misses running into Ren. 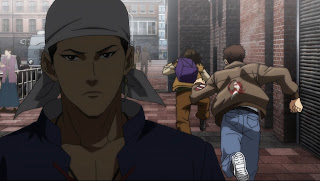 That would have been crazy to have an earlier encounter with those 2.
After a couple quick cutaways to Master Lishao Tao and Ren, Ryo and Zongquan are in the park talking about the Yellow Heads and Zongquan's backstory. After Ryo tells Zongquan that his former master blames himself, Zongquan says "as if" and starts selling books in the park. Say what?
Back at his hotel, Ryo is told he needs to start paying for the room starting tomorrow to which Ryo begins worrying about his financial issues. Joy shows up and brings Ryo out to lunch. Joy tells the quote, "tough cats ever show their claws" referring to the reputation Ryo is building and this somehow gives Ryo a revelation. He races off while Joy hints at wishing Ryo would hit on her. Ryo was always the heart breaker.
The next day, Zongquan is confronted by a larger group of Yellow Heads. He is holding them off when Ryo shows up. Ryo points out that the reason Zongquan ran from that fight was because he still upholds his masters teachings and does not show his strength or make a show of his martial arts. After hearing this, Zongquan gives Ryo a letter to give to his master. This letter references the Wude JIE, and how Zongquan broke it but has not given up on martial arts. This is when Ryo learns his second Wude.

JIE - Keep your heart free of conceit and do not use force thoughtlessly or flont your technique.
Two down, 2 to go. It sure was lucky that Ryo never got taught the same Wude twice.
Back at Man Mo Temple, Ryo quotes JIE to Master Lishao Tao and claims it is why she refused to help him. She says while that is correct, it is not the only reason and she still will not help him, but Ryo will not give up. To this, Master Lishao Tao has a flashback and decides to put Ryo up in her apartment since her friend Master Chen sent him to her and she cannot ignore that. Also, she reveals her real name as Xiuying Hong, Famgmai claims she predicted all this. THE END! 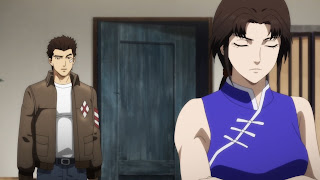 Ryo still only knows 2 of the Wude, but this is a good way to get multiple things done at once. Something this anime as thrived at so far.

This was another great episode at getting multiple important points done at once. I thought for a moment that Ryo was going to start gambling and doing part-time jobs like he did in the games in order to pay for the hotel, but that was done just to tease Ryo's new living conditions. I really like the way they are implementing the 4 Wude as a form of character development for Ryo rather than just trivia he needed to know to meet Xiuying. Not too much to say for this episode, it was another one that needed to happen. Although I will say that it was nice to see the Guang Martial Arts school's arc have a more complete story than it did in the games. We never knew why Zongquan was expelled before, so at least one Shenmue 2 mystery was solved. 4/5
Posted by Cendoo at 12:00 AM